As exciting as the Occupy movement has become over the past month, it's a latecomer. The trigger was clearly the Adbusters call to "Occupy Wall Street," for which Vancouver can feel some hometown pride. 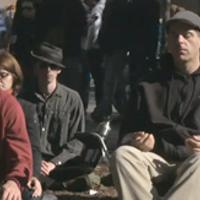 Meditate on What's Next for Occupy Vancouver, Then Tell Us

But Adbusters was itself inspired by the street protests of the Egyptians in the Arab spring. Tahrir Square also stirred the European demonstrations of the "indignados" -- the indignant ones who were losing their livelihoods to pay for their economic masters' mistakes. The student movement in Chile has also offered a dramatic public response to social injustice.

With Arabs, Europeans and Latin Americans as recent examples, North America's occupiers might consider what could happen if they finally articulate their "one demand," and don't get it. After all, think about Syria and Libya.

No one expects the one per cent to suddenly apologize for a 30-year misunderstanding, and hand the government (and the money) back to the 99 per cent. More likely they will respond with what's worked in the past: cops in the streets and demonstrators in jail.

That's already happening in hot spots like Athens, where new rioting broke out on Oct. 19 after the Greek Parliament passed yet another austerity bill.

The Greeks, of course, already have their one demand: their jobs. As the Occupiers try to articulate a comparable demand, they'll have to get past the "corporate greed" cliché.

Our own Occupiers are coming from different positions: student debt, unemployment and underemployment, stagnant careers. A recent UBC study finds that young families have it far harder than their parents did in the 1970s; median household income in B.C. has actually fallen six per cent since 1980. Meanwhile, average housing costs in B.C. have risen by 149 per cent.

Inequality at the root

The basis of all these troubles, I believe, is income inequality. Since at least 1980, most people's incomes have stagnated while the richest have only grown richer.

This is not just a matter of fairness, or making enough money for a down payment on a condo. The widening income gap in industrial societies actually has powerful and ugly effects on population health and life expectancy: every socioeconomic class is healthier than the class below it, and sicker than the class above it.

The "social determinants of health" are known issues in the public health community. The World Health Organization is on the case; while Athens rioted on the 19th, WHO was opening a three-day conference on the problem in Rio de Janeiro.

This doesn't mean that the Occupiers' one demand should be better health care (though Canadian medicare has helped to slow the widening of our income gap). A narrower income gap between richest and poorest will reduce health problems for everyone, including the richest. Whether the richest have a cap on their incomes, or the poorest get a boost in theirs, Canadians' health and longevity will improve.

And that doesn't mean a Robin Hood solution, enabling the poor to go on a spending spree at Wal-Mart at the expense of the rich. It should mean giving everyone a better opportunity to find meaningful work with a living wage.

A key step toward such opportunities is better access to education and training. This is already a priority for many middle-class and working-class families. They see post-secondary education as the only way to keep their children from falling to the worse end of the income gap.

While the rest of us were focused on the European debt crisis, the demand for better post-secondary education has convulsed Chile for six months, shutting down campuses and sending students and professors into the streets in the scores of thousands.

Far from being a leaderless gathering with no explicit goals, the Chilean students have been highly organized on one issue: "free, good public post-secondary."

"We understand the struggle of the indignados," says their leader, 23-year-old Camila Vallejo in an interview with BBC Mundo, "but in Chile we've passed the stage of discontent."

Vallejo argues that the students' demands, far from being spontaneous, "follow a long process based on a profound analysis of what is happening in Chile, of the injustice." And she wants to "project this movement politically, because for the first time a sectoral demand has become a social movement that includes many sectors."

In six months Vallejo has become a political superstar in Latin America, far outpolling Chile's President Piñera. Mexican students create videos supporting her. Brazilian students invite her to speak, and she's just returned from a quick European visit where she and her student-leader colleagues got a rapturous welcome at the Sorbonne. Her admirers post videos and songs about her.

Like the Occupiers, Vallejo and her movement are surfing on the social media. As of Oct. 19, she had 314,000 followers on Twitter, a number growing by roughly a thousand a day. And she herself is a topic of lively twiteando by others.

On Chilean TV, Vallejo speaks calmly and confidently, even a little pedantically, about the "profound inequality" reflected in a "market-driven post-secondary."

But Vallejo also understands that her movement is contending with the potential for serious violence.

Student marches have repeatedly been broken up by the Carabineros, well-equipped riot police. A profile of Vallejo in The Guardian describes how she was recently hit with a one-two punch: blasted with a water cannon and then doused with tear gas, triggering a severe allergic reaction.

Marches have also seen violence from "descapuchados," or "hoodies," who go on vandalism binges that include burning buses. One such incident on Oct. 18 led to President Piñera invoking the Law of State Security, with draconian powers for the police. Vallejo responded by criticizing the Carabineros for not controlling the hoodies during the Oct. 18-19 student strike, and the president for criminalizing students.

According to another Guardian report, the Chilean students are already moving on to other sectors -- banks, genetically modified crops, and a dam project in Patagonia. Their latest marches have also included teachers, unions, civil-rights groups and environmentalists.

This suggests at least one option for the Occupiers: to make the one demand a series of escalating demands, starting with a local issue and aiming for a "social movement with many sectors."

The threat of state violence

But that would also carry the potential for state violence as well as hoodie-style chaos. Camila Vallejo and her fellow-students have factored that into their "profound analysis" of Chile's problems, and they're unlikely to be naive about that potential.

Vallejo, after all, is a member of the Communist Youth of Chile, and her parents were Communists who survived the horrors of the Pinochet era. She's received death threats (one from a government official who was promptly fired). Every time she appears in public, she risks being killed.

As a deliberately leaderless movement, the Occupiers in North America would have a hard time accepting a charismatic leader like Vallejo, even without her far-left ideology. But they should be studying the Chilean protests as well as those in Greece, Spain, Israel and other countries.

At some point the Occupiers will have to strike their tents and move toward the legislatures. It could well be a long, hard journey, with the one per centers fighting them every step of the way.