Everybody knows this one: 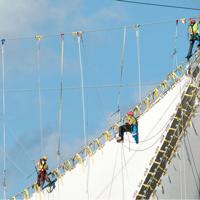 Portraits of a Province at Work

Q: If there's a Mother's Day and a Father's Day, why isn't there a Children's Day?

A: Because every day is Children's Day!

The same logic holds if you ask "Why is there a Labour Day but no Boss's Day?" Every day is Boss's Day. But Labour Day isn't much used as a day to celebrate labour anymore. It's a day to watch sports on TV, to hold a barbecue, maybe close up the cabin or get to the lake one last time.

It wasn't always that way. In years long past, workers held parades and marches and picnics and sports days to show that labour and the labour movement were crucial components in the community and to take a day for recreation at a time when the 10-hour day and the six-day week were common.

Labour Day was also a day to send a powerful message: that labour was a political force at the polls and in the streets. Vancouver's first Labour Day was held in 1890, four years before the holiday was officially proclaimed. Marching under the banners of several unions and accompanied by musical bands, workers formed a parade nearly a mile long that wound through the city core. The parade was led by Joseph Dixon, the head of the Vancouver Trades and Labour Council, (now the Vancouver and District Labour Council), who sat astride a bay horse to marshal the parade. At the finish of the procession, ferries took people to Brockton Point, where a speaker reminded everyone that "the worker... produced the wealth of the world." Only when workers united to change "unjust laws" would they receive the full value of what they produced. Celebration, recreation, and politics were combined as the city's workers took their first Labour Day without official recognition or sanction.

A day to display political power

It was labour's political power that led the Canadian and U.S. governments to make the day a statutory holiday in 1894. In the U.S., the violent crushing of the Pullman strike by federal troops that year pushed President Grover Cleveland to proclaim the holiday in a futile attempt to make the government look less hostile to labour. In Canada, there was no single precipitating event, but the growth of craft unions and more radical unions such as the Knights of Labor, the increasing numbers of strikes, and the rise of labour candidates in municipal, provincial, and federal elections demonstrated that Canada's workers were increasingly disenchanted with the growing gap between the wealth they produced and the little that trickled down to them.

The rising militancy and radicalism pushed John A. Macdonald to respond in typical Canadian fashion: in 1886, he created the Royal Commission on the Relations of Labour and Capital. The commission heard the testimony of nearly 2,000 workers and documented the long hours, unsafe conditions, and changing gender roles that marked Canada's industrialization. The commission, which included several male workers, made a number of recommendations about factory inspections, sanitary conditions, wages, the cost of living, arbitration, workers' compensation, and the like. Five years after the commission's report in 1889, only one recommendation had been acted upon by the federal government: "that one day in each year be set apart by proclamation, to be observed throughout the Dominion as a statutory holiday, and that it be known as Labor [sic] Day."

While the labour movement deserved the credit for the holiday, Labour Day soon lost much of its political significance. By 1898, the Vancouver parade was no longer called "the procession of trades"; it had become "the Industrial Parade." Union floats were outnumbered by those of merchants and manufacturers. Instead of listening to militant speakers declaring that labour was the source of all wealth, celebrants took part in athletic events, with prizes supplied by local businesses.

By 1909, militants in Vancouver's labour and socialist movements were denouncing Labour Day parades, seeing them "as a hollow sham." Increasingly radicals argued that Labour Day had ceased to be a day of protest; it had instead become a sign that the labour movement was unable or unwilling to mount a successful campaign against capital, that it had been incorporated into the system, that it had been bought off. Instead, radicals celebrated May Day as a day of international solidarity, and one that was more meaningful because, like the original Labour Days, it was a day workers took for themselves rather than one that was given to them by their class enemies.

Ironically, the very success of the labour movement also contributed to the decline of Labour Day as an explicit workers' holiday. By the 1950s, many workers -- mostly male, white, and in occupations considered skilled or semi-skilled -- had won longer vacations and better pay, and so the day of rest in September became viewed as the last chance to enjoy summer rather than a special day. And by the 1950s, people were being pushed to think of themselves as consumers rather than workers, that is, to define themselves by what they could purchase, not how they earned their money. The idea that they were "labour," rather than some part of the middle class, just didn't seem to fit with that new vision of consumerism.

Since then, workers have been under attack by corporations and governments, in Canada and around the world. The laws have been changed, and it is harder to organize a union in Canada today than it was in the 1950s. The percentage of workers in unions has dropped, people are working longer hours and earning less pay, workplaces are more dangerous, social welfare protects fewer people and provides less to those in need.

Reinvigorate the day, and the movement

Labour has not been able to stop this. One reason it has been unable to mobilize more effectively is that the radicals and militants have largely been isolated and purged. Most of the breakthroughs and innovations and new directions of the movement came from the radicals, from the Knights of Labor, the Industrial Workers of the World, the Communist party, the left wing of the CCF, and others. They were the ones to first organize women, immigrants, the so-called unskilled, all the workers the conservatives in labour said could never be organized. The radicals and militants were the ones who gave labour a larger, more inclusive vision, who pioneered new tactics such as the sit-down strike and the sympathy strike, who forged new solidarity with those who needed it most.

Without that rebel energy no movement can adapt to new conditions. A movement that is not creative cannot inspire or lead. A movement that cannot think outside the box will find itself trapped inside that box. So perhaps the best way to think about Labour Day is not to bemoan that we have forgotten its history but to consider how to recapture the present and to build the future.