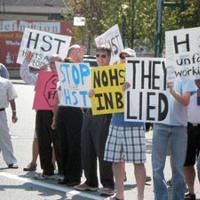 HST Is Dead, 'Public Has Spoken'

The Harmonized Sales Tax referendum vote last week to kill the tax taught some important lessons -- but is the B.C. government and big business listening?

First, the HST is a stunning illustration to politicians across Canada of what happens when you mislead voters before an election and surprise them after.

Denying that the BC Liberal Party had HST plans prior to the May 2009 vote and then announcing in July the HST would be imposed cost Premier Gordon Campbell his job -- despite winning three elections.

Second, not consulting voters about the HST only heightened suspicion and anger.

No studies, no public meetings -- nothing happened before Campbell claimed the HST was "the single biggest thing we can do to improve B.C.'s economy."

Third, the BC Liberals stubbornly refused to listen to British Columbians who disagreed with the HST and didn't want to pay an extra seven per cent tax on hundreds of goods and services.

To an alarming degree still voiced by some government supporters, anyone who didn't endorse the HST was denounced as stupid or worse.

"The highest form of ignorance is to reject something you know nothing about," was one HST backer's arrogant Twitter comment that was reTweeted repeatedly Sunday.

Presumably he thinks the 881,198 people who voted 55 per cent Yes to extinguish the HST were idiots while the 728,927 voting No to keep the HST were geniuses.

Those in the business community who heavily backed the HST through the Smart Tax Alliance were only slightly more restrained but equally in denial about the results.

"The B.C. government, I think, has got now to sit down with business and all stakeholders and perhaps develop a Son-of-HST version that is a consumption tax, that is a fair consumption tax and allow it to not have to refocus its efforts on business taxes or on income taxes, which was their goal," according to BC Chamber of Commerce president John Winter.

Big business was equally unhappy at the loss -- and the end to a $2 billion annual tax shift from its members to consumers.

"This is a very, very, big setback for the business community and for building a competitive and productive B.C. economy," Jock Finlayson, vice-president of the Business Council of BC told the Vancouver Sun. "It's not just business that will be affected. It's the provincial economy as a whole."  That's why the Smart Tax Alliance was well-financed to run a television, radio, print, Internet ad campaign by FD Element [now being re-named FTI Consulting] -- the agency that also ran the failed 2009 pro-Single Transferable Vote TV ad efforts -- and a Prime Contact telephone campaign by the firm that helped install right-wing Toronto Mayor Rob Ford in office.

That all came at a cost that the Smart Tax Alliance still refuses to disclose -- and doesn't have to because the Clark government helpfully excluded mandatory financial reporting rules that apply to elections, initiatives and other referenda from the HST vote.

Spending limits were also not applied, leaving the sky the limit for STA propaganda.

That means voters will never know what the Coal Association, the Petroleum Producers, the Council of Forest Industries, the Mining Association, the New Car Dealers and others spent to try and win the referendum.

But with prime time STA television ads run through the Stanley Cup playoffs and top rated TV shows, it's highly likely that $10 to $20 million was spent.

Few were as unhappy as those from the $1 billion film and television industry, which helped lead the pro-HST charge.

Peter Leitch, chair of the Motion Picture Production Industry Association of BC and co-chair of the Smart Tax Alliance, said defeat of the HST was "a real blow."

"Now we are now going to have to go down to Los Angeles and tell them we won't have the benefits of the HST," he told the Sun, noting that the HST saved the industry $20-25 million a year.

But Leitch doesn't like talking about the already existing massive government subsidies given by the B.C. government to the industry.

B.C.-owned companies can get even larger tax credits -- a basic 35 per cent break on qualified labour, distance incentives and a 30 per cent training credit.

Those taxpayer-funded incentives have amounted to nearly $200 million a year, leading to the question -- how much more does the film industry want from government?

Business was not united

But those are the HST winners in business. There were losers who will benefit when the HST is finally removed.  Restaurant owners, hair stylists, consultants, home renovation and repair companies massage therapists, bicycle stores, gyms and other businesses all had to charge their customers an extra seven per cent tax for nothing.

Representatives of some of those business sectors were pleased.

Not listening to either voters or business owners hurt by the HST showed that those running the government were truly foolish, especially when poll after poll showed massive opposition to the HST.

That foolishness continued when the BC Liberals ignored Fight HST, the grassroots group I helped form with ex-premier Bill Vander Zalm, ex-Unity Party leader Chris Delaney and others, to oppose the tax.

The government also paid no attention to the phenomenal growth of my Facebook protest group NO BC HST, which skyrocketed to over 136,000 members in a few short months, briefly eclipsing even the Vancouver Canucks fan page.

They didn't believe Fight HST could possibly make the extremely difficult citizens initiative legislation work -- but it did, with 705,643 signatures gathered in 90 days in B.C.'s 85 ridings.

Then Premier Christy Clark rashly thought a $5 million government ad campaign, and a big business effort likely worth $15 to $20 million, plus an HST rate cut promise years away, could buy the vote.

Despite being outspent by up to 100 to 1, Fight HST won a referendum with a handful of lawn signs and a few radio ads against an overwhelming government and business advertising blitz.

But had BC Liberals simply listened, Campbell would still be premier and Clark would only be running a radio talk show, not the province.

As Vander Zalm put it Friday: "The people of British Columbia stood the line against the biggest powers of this province and won. The little guy won today. This is one for the little guy."

Misinformation in the media

And despite 25 months of near constant debate and discussion of the HST, some in the media remain oblivious to the obvious and the facts.

For example, some have said the BC Liberals could have survived if Campbell had stuck to the Recall and Initiative Act rules instead of promising a binding, majority rule vote under the Referendum Act.

That's because the initiative provisions require 50 per cent plus one of all registered voters to approve -- not just the votes of those who return a ballot -- and a majority in two-thirds of all ridings.

By that extremely onerous standard, the HST would have been retained.

But those commentators forget that the Initiative Act provisions would not have made repealing the HST binding -- it would only have forced the government to introduce the Fight HST legislation to get rid of the tax into the Legislature -- but not even call it for a vote, let alone pass it.

Practically speaking however, should the vote have been conducted under the initiative provisions and passed with 55 to 45 per cent but not have met the "supermajority" conditions, the BC Liberals would still be in an enormous bind.

Would they reject the obvious majority vote of those participating and keep the HST in place but risking both immediate recall campaigns against their MLAs and political suicide whenever the next election took place? Or would they have had to ditch the HST anyway, aggravating business supporters who would claim they won because of the rules?

And so much for B.C. turning into referendum-happy but broke California. There's no chance of that because of the difficulty of the initiative rules. But the province should make direct democracy more of an option for voters by improving the recall and initiative legislation as the BC Liberals promised to do in 2001.

Some in the media have also accepted as fact Finance Minister Kevin Falcon's claims that defeat of the HST leaves a "$3 billion hole" in B.C.'s budget.

But how was it that B.C. could promise to cut the HST to 11 per cent in 2012 and 10 per cent in 2014 without losing the roughly $1 billion per percentage point cut in the tax? How were they going to deal with that enormous cut to government revenues?

And much has been made of the one-time $1.6 billion grant from the federal Conservative government to impose the HST that will now have to be repaid.

The HST was already raising an extra $800 million a year, according to the government-appointed "independent panel" that reported on the HST -- which Campbell had promised was "revenue neutral" when it was introduced.

Some of that additional money can be used to pay back the apparently interest-free loan from Ottawa.

But who gives money for nothing? The federal government knew it would be making all that back and more over a short period of time in higher tax revenues.

And why did the government spend over $600 million on a new retractable roof for B.C. Place if it was worried about its finances, especially with the HST at risk? Or $3 billion on a new Port Mann Bridge instead of the cheaper option of expanding the existing structure?

Now we will see how good a negotiator Clark and Falcon are, because B.C. should at least see that grant reduced by a pro-rated amount for the period of time the HST was in place -- likely two years by the time it's wrapped up -- or 40 per cent of the five year agreement.

The reality is that a desperate Gordon Campbell, who had told voters before the 2009 election that the B.C. deficit was no more than $495 million, was wrong by six-fold -- and knew he would be roasted for it.

He made a hasty deal with the Ottawa devil to try and buy his way out of financial trouble with the $1.6 billion grant.

And in his hubris, Campbell ignored all political warning signs, as did his government.

Only Peace River South MLA Blair Lekstrom -- who quit both cabinet and caucus to protest the way the HST was being rammed down British Columbians' throats -- could see the storm on the horizon as his constituents rebelled. And then he quickly jumped back into cabinet when Clark took over.

The HST referendum results are now history -- and a victory for democracy, against all the odds.