Two out of three Canadians do not want to see another Stephen Harper-led government. If you are one of those voters, I've created a way to send donations to where they can do the most good to support candidates other than the Harper Conservatives. 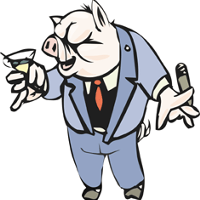 Our Democracy for Sale, Still

It's called Swing 33.ca. Visit the Swing 33 website here, to move beyond the idea of strategic voting, and into the realm of strategic donation.

Swing 33 simply identifies 33 key ridings where Conservatives are in tight races with other parties, and links you to the donation page of the leading opposition candidate (not their party headquarters).

I'm not a paid strategist for any party. I'm working on no one's campaign. When it comes to waging electoral politics, I'm no professional. I've created Swing 33 simply to help Canadians strategically target their money to the party and candidate of their choice to help defeat Stephen Harper.

Money's influence seems too obvious to mention except that less than one per cent of Canadians contribute money to our political process. The distaste for donating to political parties seems especially to afflict those who complain about Stephen Harper -- much to the benefit of ruling Conservatives. Harper's fundraising machine now pulls in more money than all other Canadian political parties combined.

How did this happen? Campaign finance reform brought in by Jean Chrétien hobbled the Liberals, which for decades were dependent on now prohibited corporate donations. Likewise the NDP was a squeezed by a similar sanction on union contributions. Limits for personal donations were lowered to $1,100 annually.

The Conservatives under Stephen Harper aggressively filled this void, adopting sophisticated fundraising tactics perfected by Republicans in the US. Conservative donors now outnumber Liberal contributors almost three to one, and NDP donors four to one.

These numbers certainly don't reflect the level of voter support for the Conservatives, so why are they so much better at fundraising? Perhaps their right-leaning supporters better appreciate the necessity of involving not just their vote, but also their money in the political process.

The changes introduced in the last days of Chrétien were long overdue, but have failed to be embraced by most Canadians. If the Tories are the only ones effectively fundraising (in part because everyone else has become so disengaged), then other political voices will continue to be displaced. As Canada becomes reshaped by Conservative policies, there is less and less opportunity for progressive people to get involved. In short, we get the political process we deserve.

There is also our antiquated first-past-the-post voting system, which means that for the vast majority of Canadians who don't live in a handful of swing ridings, there is little point in voting at all. But while you might not be able to vote in these swing ridings, you can certainly send your money there.

So as my civic duty to help level the fundraising playing field, I have made it easy for you to do just that. Swing33.ca is a website that allows you to make targeted political contributions directly to the leading opposition riding associations in the 33 constituencies carried by less than five per cent of the 2008 vote, and where Conservatives came in first or second.

Where a little money makes a difference

As I say, this is strictly a volunteer effort (with no affiliation to The Tyee, by the way). While this project's potential results might not be exactly non-partisan, the opposition candidates you contribute to are based only on the results from the 2008 election. This also allows you to bypass the head office of political parties and deliver your contribution directly to the leading opposition candidate in the most hotly contested ridings in Canada.

Will your contribution make a difference? In many of these ridings, the money raised in 2008 compared to votes received was less than $5. This means that for a $400 donation, you might help bring in 80 extra votes. That would have tipped the balance in four of the closest races in the last election.

You will also get most of that money back in form of tax refunds -- up to 75 per cent. In fact, Canadian tax law provides far more generous tax breaks for political donations than charitable contributions. In spite of this generous encouragement from Canada Revenue Agency, Canadians still give 300 times more to charities than our national political process.

So does money matter in politics? Obviously the Conservatives think so. Harper is again threatening to dismantle our progressive election financing system. Four senior Conservatives were also recently charged with willfully exceeding election spending limits in the "in and out" scheme to allegedly skirt national campaign spending limits.

Ordinary Canadians can instead work within the important restrictions on campaign contributions to build a better country. Being an engaged citizen in our hard-won democracy means more than voting -- it means supporting candidates and parties you agree with.

And for the two thirds of Canadians who do not support the current government, there now exists a tool to inform your decision when opening your wallet to help defeat Stephen Harper. It is time to embrace strategic donation, and Swing 33.