The odds now seem to favour a spring election, as Stephen Harper headed out across the country with his cabinet ministers to announce over $300 million in goodies. In anticipating yet another campaign, it is worth remembering that without the NDP, Canadian politics (outside Quebec) would look an awful lot like the U.S.: two political parties, economically and socially right-wing, both with a recent history of dismantling the activist state and gutting its revenue base through huge tax cuts. All the while pretending to compete for our hearts and minds. 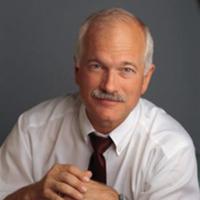 How Layton Can Convert His Popularity into Votes

To be sure, the Conservatives -- who should rightfully be called the Republican Party -- are by several degrees worse than the Liberal Party. Stephen Harper runs a ruthless autocracy with contempt for every aspect of democratic governance from watch dog organizations to parliamentary committees to access to information, and topped off with a relentless assault on the political culture through the defunding of civil society.

It now turns out that the Harper government may be much more corrupt than even the existing record shows. The Canadian Press did an FOI on the Integrity Commissioner's office formerly headed up by the now discredited Christiane Ouimet. The documents revealed 42 of the 228 cases under scrutiny involved alleged misuse of taxpayer dollars, approximately 50 involved charges of "gross mismanagement" and an incredible 60 complaints involved contraventions of Acts of Parliament. Not a single complaint resulted in any action.

Grits run to the left, as usual

Given the Harper record it is easy for people to see the Liberals as a genuine, even mildly progressive alternative. It is now busy following its age-old script by poaching issues either championed by the NDP, such as opposing corporate tax cuts and appealing to "working families," or pretending to oppose the jet fighters when their policy would actually result in the same purchase -- just through a competitive tender. Ignatieff has also gone after Harper on the billions that will be spent on new prisons. It could all sound pretty appealing.

But it is important to recall just how awful this party was under the regimes of Jean Chretien and Paul Martin. Martin made the largest cuts to social programs of any government in Canadian history -- far out distancing Brian Mulroney in the savagery of the cuts. He also did his best to undermine social program universality by eliminating federal funding tied directly to health, education and social assistance -- giving the provinces instead a lump sum transfer payment which could be used for anything.

Martin then topped it off with the largest package of tax cuts for the wealthy and large corporations ever implemented in Canada: $100 billion over five years (compared to Jim Flaherty's cuts of $60 billion over five years). He was also responsible for implementing a ferocious "labour flexibility" program designed -- successfully -- to flatline Canadian wages and salaries through deliberately creating a seven-year recession.

This is the Liberal Party of Canada and it doesn't matter who its leader is. Its current head is a man whose very philosophy questions the notion of right and wrong -- "Let's see… is torture okay or not?" That may well be why Canadians trust him the least of all federal leaders.

Nevertheless, for the third election in a row those who want to preserve and enhance a progressive social and economic agenda for the country have to rely on the Liberals getting more seats than the Conservatives -- and governing with some kind of support from the NDP and the Bloc. If that happens, the kind of government we get will be largely determined by the balance of Liberal and NDP seats in the House.

The irony is that when Harper does his now-predictable drop from the high 30s in the polls, it is the Liberals who benefit. Last week was typical. For several weeks Harper was pushing into potential majority territory -- enough polls that it looked like a trend. But whenever he gets this close, Harper demonstrates his arrogance and lack of impulse control. He does something brazenly stupid. This time it was defending the lies of Bev Oda, his minister of international co-operation. It brought him down from a 12.5 point lead over the Liberals to just 5 points. But it also whacked the NDP from nearly 19 per cent to just 14.5 per cent.

It seems that when people get scared of Harper, some of them abandon the NDP for the Liberals as a stop-Harper strategy. But the only way the next parliament will produce anything resembling progressive policies is for the balance of power to shift towards the NDP. Ignatieff is hostile to a formal accord or a coalition, an idea he already killed once. He will not be easily persuaded if the NDP has even fewer seats this time around and he has more.

Will there be a real contest of ideas in this election? Not likely. Federal politics are now so constricted by geographic and demographic considerations and by the calculus of voter preferences that many of the issues that progressives care about, given their stated values, might not get any play. The number of issues that appear to be off the electoral table include child care, democratic reform (proportional representation), climate change, Canada's place in the world, fair taxes, and the obscene gap between rich and poor. No party will make these leading campaign issues.

And again, there is no talk of a coalition by either the NDP or the Liberals. Perhaps if the NDP had publicly pushed for such an accord, and forced Ignatieff to explain why he opposes one, it could have protected its left flank from the policy poaching now being conducted by the Liberals -- pushing to identify four or five policies they were both committed to.

Each of us will go into the election assuming our vote is as important as is the vote of the person next door, and the person anywhere else across the country. But the fact is the election will be decided in Ontario and that is where all three national parties will be focusing their attention and dollars. (Home heating is huge expense for ordinary families in Ontario and that's primarily why the NDP picked it as an issue). If people in other provinces feel slighted, they shouldn't -- it is the reality of Canadian politics and electoral system that no party can afford to ignore. But it is not what democracy should look like.

If the NDP designs its election platform from its strength, it will do two things. First, it will emphasize trust. Layton scores very high on this factor and in a battle to rid the country of Harper that will have two advantages. First, in a trust battle Ignatieff is barely in the game. Secondly, Harper, while he maintains his lead on economic issues, is very vulnerable on the character front. His countless violations of democracy, his defending the indefensible, his control freakishness -- all grate on Canadians at a fundamental level.

While online polls are unscientific and can be manipulated, a recent one asked on what issue Harper was most vulnerable. With almost 27,000 people voting, just 11 per cent said corporate tax cuts and only 4 per cent said fighter jets. Eighty-six per cent said "secrecy and control."

That could be refreshing -- an election about democracy.