"An Englishman thinks he is moral when he is only uncomfortable." George Bernard Shaw 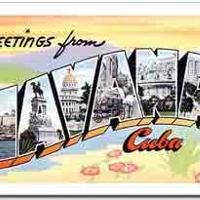 You Won't Catch Me in Cuba

If Canadians were to adopt as their own Bill Tieleman's arguments yesterday in The Tyee against travelling to Cuba, they could skip happily along the well-trodden path of non-maleficence, their morally superior pigtails swaying in the breeze: primum non nocere; first do no harm.

Certainly there is much to be said for not travelling to the Caribbean Island. What good could possibly come from sliding up to the stool in the pool bar and ordering another double mojito? As Bill implies in his column, broiling on the beach of an all-inclusive might be good for my Vitamin D intake, but hardly does anything to address the plight of political prisoners rotting away in Cuban jails.

"You can't have it both ways," Bill harrumphs triumphantly. "You either support democracy and human rights everywhere or you don't." And if the Cuban situation -- Hell, the world in general -- was made up of such false dichotomies, Bill would be right.

But, Bill, you're wrong. And here's why.

Suppose if doing something, like travelling to Cuba with your eyes wide open, would actually do some good, or at least more good than holding tight to your reedy personal boycott? Wouldn't doing something -- engaging in an ethically complex universe, say -- rather than doing nothing, be a moral obligation? I think so, or at least I think so in the case of Cuba.

Let's be clear: I'm not proposing that Bill break his boycott and join the swarm of Canadians parachuting into the isolated enclaves of Veradero. That isn't good for anyone's soul, period. Buying a Veradero all-inclusive package funnels cash into private foreign companies who have struck dubious partnerships with the Cuban government. They offer jobs to locals, to be sure, and purchase local goods as well. But the camion-loads of profits not dumped into the coffers of the Cuban government are squirreled away in off-shore tax havens.

Bill would do well to avoid such a moral quagmire, particularly those hotels wholly-owned by the government. (Note to Bill the oenophile: you can tell the government-owned hotels from the joint partnerships in Veradero by the quality of the wine list, or so I've heard.)

Nor am I proposing that Bill ignore the atrocities committed by the Cuban government over the years. One need not be a Cuban apologist, as Bill implies, to see the value of travelling there. Yes, Cuba has a laudable health care system and a similarly enviable education system, both of which they share generously with their Caribbean neighbours. But while there is much to be said for the country's adherence to the International Covenant on Economic, Social, and Cultural Rights, the government's track record on political and civil rights is abysmal.

But, Bill, not all countries are created equal, and Cuba is no North Korea. Those who have travelled to Cuba don't face the hopelessness prevalent in the Hermit Kingdom, and years ago in the former Soviet bloc for that matter. This, too, you would learn if you were to break your boycott. Besides, trod along, head held high, certain that all non-democracies are the same, and you might very well fail to see the struggling seedling of change thirsty for our support. Stomp, stomp.

In Cuba, for instance, there are tourism options that don't prop up the government directly; they may in fact put pressure on the government for change. Take the casa particulares. These are privately owned bed-and-breakfasts. Owners do pay a crippling licensing fee to the government, but the extra money the entrepreneurs pocket from the lodging, and particularly from the optional dinners, is theirs to keep.

With the safety net shrinking in Cuba, helping Cubans working in the tourism industry (if it can be called that) access foreign currency is like throwing them a lifeline. And, don't forget, the currency they get from tourists is spread through the local (albeit fledgling) private economy, with casa particulares owners paying for food stuffs, bedding, stereos, and the like, often outside of the confines of the stifling government controlled quota system. Pump enough currency directly into the hands of a growing middle class in Cuba, and who knows what trouble Canadian tourists could bring to Raul and Fidel?

What we do know is that faced with growing economic challenges (partially of the government's own making, partially a consequence of the global economic system, and most certainly because of the American embargo), the Castros have announced that 500,000 state employees are about to get axed. That means over the next six months, half a million Cubans are about to receive the pink slip, courtesy the government, with severance amounting to little more than the anemic advice: "Go start up your own business."

Or is it so anemic? Local artist and activist, Ester Rausenberg and her partner, artist Richard Tetrault, have just returned from Cuba where they completed a mural in Santiago de Cuba in partnership with a collective of Cuban artists over the holidays. In her view, with the cuts about to come, "there isn't a more important time to go than now, when these people will be struggling to become self-employed."

Support the Cubans, visit them

It's not enough to denounce the American embargo, Bill. Cuban people also need our active support, financial and otherwise. And if we are strategic in our travel choices in the country, we can do so while minimizing our unintended support for the Castro regime.

As Isaac Asimov once said, Bill, never let your sense of morals get in the way of doing what's right. I hope you'll join me on my next trip to Cuba. I'll even buy you dinner at my favorite casa particulares in Old Havana. But on one condition: I don't want to hear about the anti-HST campaign or Adrian Dix.