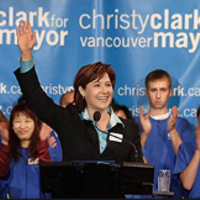 Christy Clark would be highly questionable as British Columbia's next premier.

And while as a talk radio host Clark may be adept at asking tough questions, answering them as a BC Liberal Party leadership candidate is much more difficult -- and perhaps politically fatal.

Clark claims she will "think very hard" about running for the nomination on her week off from radio station CKNW AM 980 duties as the afternoon talk show host.

But the only likely reason she wouldn't jump into the race is if contenders like George Abbott and Kevin Falcon have already sewn up too much of the BC Liberal caucus support and business community money needed to win.

If she does run, those asking the questions won't be as easy to cut off as a belligerent caller to her show.

And Clark's past political history will come back to haunt her along with four years of on-air commentary on a wide range of issues and her losing attempt to win the Non-Partisan Association's mayoralty nomination against Sam Sullivan in 2005.

Start with questions about her role in the B.C. legislature raid case, involving the $1 billion privatization of BC Rail to CN Rail in 2003.

For example, Christy, what is your position on holding a full public inquiry into the strange circumstances that saw the political corruption trial of former BC Liberal ministerial aides David Basi and Bob Virk suddenly halted by a guilty plea bargain?

Were you going to be a witness in that trial? Do you agree with the government paying Basi and Virk's $6 million legal fees?

Oh wait, it doesn't matter, because as premier, Clark would have to excuse herself from any cabinet discussion about an inquiry.

Why? How long have you got?

At the same time police conducted the unprecedented raid of the B.C. legislature, they also executed a search warrant on the home of Bruce Clark, Christy's brother and a one-time fundraiser for her campaigns.

According to an agreed statement of facts from the Crown and defence at the surprise end of the trial, confidential government information obtained from Basi and Virk was found by police at Bruce Clark's home and office.

Clark was a lobbyist working for the Washington Marine Group, which was a bidder on a second part of the BC Rail privatization, the sale of its Roberts Bank Port Subdivision, a spur line worth up to $70 million.

The RCMP advised then transportation minister Falcon to cancel the sale because it was "tainted" by the leak of confidential documents. Bruce Clark was never charged with any offences.

The statement of facts reads: "With respect to Count 10 of the Indictment and in relation to the Port Subdivision bidding process, the RCMP seized a number of documents from Bruce Clark's office and residence, which Basi and Virk disclosed to Bruce Clark between Jan. 1, 2003 and Dec. 28, 2003."

"Two examples of the documents that Basi and Virk improperly disclosed to Clark are:

"a) The draft Request for Proposals for the Port Subdivision bidding process, which was received by Clark prior to the RFP being finalized by the Evaluation Committee; and

"b) A 'confidential presentation' made by TD Securities to the Evaluation Committee dated Oct. 14, 2003 containing a detailed economic analysis of what BC Rail considered to be the value of the Port Subdivision."

Would she have been a witness?

But that's just the tip of the Basi-Virk iceberg when it comes to Christy Clark's conundrum.

Clark was deputy premier to Premier Gordon Campbell throughout the BC Rail privatization and was a highly probable potential witness in the trial.

She and ex-husband Mark Marissen, a key federal organizer for ex-Liberal prime minister Paul Martin and former leader Stephane Dion, had a home visit from the police after the raid. The police were looking for information about Basi and Virk and Marissen has made clear he cooperated fully -- there was no search warrant.

Defence lawyers alleged in Basi-Virk pre-trial court hearings that Clark may have been a cabinet source of information for Pilothouse Public Affairs, the lobbying firm run by Erik Bornmann and Brian Kieran that was retained by BC Rail bidder OmniTRAX.

Both Bornmann and Kieran became Crown witnesses and were not charged with anything, despite admitting to police they provided money and other benefits to Basi and Virk in exchange for confidential government BC Rail privatization information.

Bolton's allegations are just that -- they were never proven nor tested in court, since the trial ended long before any witnesses could be cross-examined or evidence introduced.

But Bornmann's long connections as an executive of the federal Liberal Party of Canada's B.C. branch, including strong links to fellow executive member Bruce Clark, are well documented, as are his connections to the BC Liberal Party and role as a provincial lobbyist.

And then on July 20, 2009, justice Elizabeth Bennett, the former Basi-Virk case judge, ruled that emails between Pilothouse lobbyists and Christy Clark were "likely relevant" and must be disclosed to the defence.

"The Crown concedes that any email communication between the lobbyists and Christy Clark, Richard Neufeld, Gary Collins, Judith Reid and Paul Taylor are likely relevant," she noted in her decision.

"Ms. Clark was the deputy minister and may have expressed concern over the CN Rail dealing at a cabinet meeting. Further, there is some evidence that indicates that she may have had some dealings with Pilothouse. Emails of Ms. Clark relating to the divestiture of BC Rail and the sale of the Roberts Bank, as well as any contact with Pilothouse, are likely relevant," Bennett’s disclosure ruling continued.

All of this may have been an impetus for Clark to lawyer-up for the first time in the lengthy pre-trial hearings, retaining John Esson to represent her in court starting in Aug. 2009.

But McDonald also has his own connections to the Basi-Virk case.

Again, according to unproven allegations made by defence lawyers in pre-trial hearings, McDonald was involved in supervising Basi's stacking of paid phony callers to radio talk shows, ironically including CKNW.

Virk's lawyer Kevin McCullough on April 23, 2007 read from what he told the court was a police transcript of a call between Basi and McDonald.  "'Dave's asking Mike if he wants to make some calls to CKNW after the MLA is on,'" McCullough alleged.   Justice Bennett interjected: "Is this a Liberal MLA? "  McCullough: "Yes."  Bennett responded, to laughter in the court: "I should have known that."

At another point McCullough alleges that McDonald and Basi discussed how Basi would organize calls to attack former B.C. premier Bill Vander Zalm during a radio appearance.

"Dave says they are going to give Vander Zalm a rough ride. [Mike] tells Dave to be careful, they don't want the phone numbers showing up from [government lines in] Victoria. Dave replies, 'Star 67, man,'" McCullough read from what he said was a police wiretap summary. (Star 67 refers to a caller identification blocking option.)

And there's much, much more to the tangled web of the Basi-Virk case that no doubt Clark would prefer was left undisturbed.

But with the trial concluded, there is no restriction on the media or others asking questions.

She's a fan of the HST

Plus, there are more unexploded bombs in Clark's recent past -- such as her steadfast defence of the despised Harmonized Sales Tax and her support for the overwhelmingly rejected Single Transferable Vote in 2009.

So if Clark finally admits she wants to be premier, expect her opponents both in and out of the BC Liberal Party to turn her candidacy into a walk in the hurt locker.