If the 492 Tamil asylum-seekers who recently arrived by boat on B.C.'s shores are "queue-jumpers", then I guess my parents were too. See, they came as Vietnam War draft dodgers from the U.S. in 1967. Like a couple of the Tamil women just arrived, my mom was pregnant with me. My parents did not seek advance permission from the Canadian government to immigrate. They did not fill out any paperwork before arriving. And they could no more seek permission to leave from their home government than these Tamils could, for what they were doing was, as far as the U.S. was concerned, illegal and would result in my father's arrest. 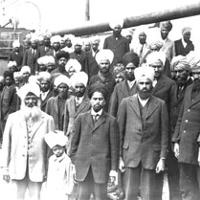 Why Tamil Boat People Should Be Let into Canada

Of course that's the thing about being an asylum-seeker -- you don't get into a queue. When you've got to go, you've got to go. Hell, my folks didn't even know Montreal (where they landed) was a predominantly French-speaking city.

So they just showed up. The difference, however, was that in those days, they got landed immigrant status in 20 minutes at the airport. Imagine that! Over the course of the Vietnam War, about 100,000 American war resisters came to Canada (many with less formal education than my folks and thus unlikely to score particularly well under today's immigration point system, and I suspect many had less education than many of these recent Tamil arrivals). Yet here we are setting our hair on fire about 492 people.

But those aren't the only numeric comparisons I find curious.

Among the common reactions to the arrival of the MV Sun Sea is the proposition that Canada's alleged lax immigration laws make us a global sucker -- a target for many of the world's migrants. This is an absurd notion.

World conflicts, environmental disasters, and a global economic system that keeps billions impoverished has resulted in millions upon millions of refugees and displaced people. In Pakistan alone, the current flooding is producing, we are told, 14 million internally displaced people. Globally, there are, according to the UN, about 43 million "forcibly displaced people," of which about 15 million are refugees. (You can find good UN statistics on displaced people here.)

But the vast majority of these globally-displaced people are being absorbed, not by wealthy countries, but either internally or by neighbouring poor countries -- the places least able to afford the costs and with the bleakest economic prospects.

Canada accepted fewer than 20,000 refugees last year -- a drop in the global bucket (about 0.1 per cent of world refugees) -- and our acceptance rate has been declining in recent years (and in contrast, Canada deported about 13,000 people). As Stephen Hume notes in an excellent piece in the Vancouver Sun, Canada does not rank as one of the top recipient countries for refugees: "Other developed countries are the destinations for most refugees and many more are granted asylum in those countries. . . Measured as a ratio of refugee claims to population, Canada doesn't even make the top 10 nations for asylum seekers."

Surely, when a few hundred people arrive on our shores, we can afford to treat these people with respect and grant them due process.

And here's another curious comparison: The real and much more significant Canadian immigration story of recent years (at least measured numerically) isn't about refugees or people arriving by boats. It's about the explosion in temporary foreign workers. Over the past few years, the number of temporary foreign workers coming into Canada each year exceeds 200,000, and now surpasses the number of immigrants.

But the Harper government hasn't been sounding the alarm about this. On the contrary, the federal government has been promoting and facilitating the massive growth in this category of migrants. Why? Because unlike regular immigrants and refugees, these workers are being specifically requested by employers, their indentured status makes them unable to exercise key employment rights and leaves them highly vulnerable to exploitation and unsafe conditions, and they are unable to make the same claims to the social and economic rights that Canadians take for granted.

Immigration is central to the story of Canada -- waves of people who came, mostly to meet a domestic need for labour, and sometimes fleeing harm and conflict. But historically, once people arrived, either as immigrants or refugees, they were, upon landing, met with a social contract: they could avail themselves of the social and economic rights Canadians enjoyed (such as health care and education for their families, and workplace rights and protections), and in a few years could be granted the full rights of citizenship.

With the explosion of temporary workers (set against a tightening of regular immigration and refugees admissions, and reactions such as those we see directed towards the Tamils), the government is effectively saying, 'that deal is off -- we're happy to have temporary indentured labour, but don't think you can be a Canadian."

When my parents arrived in the '60s, a small minority in Canada were keen to label the Vietnam war resisters with all manner of unwelcome labels (much as the Canadian government is currently doing with respect to the Tamil asylum-seekers today, quickly labelling them as terrorists, criminals and queue-jumpers). But for the most part, the Vietnam war resisters were welcomed, and went on to make a valuable contribution to Canadian society. Much the same can be said of the Vietnamese boat people who arrived in the late 1970s. Why can't these better receptions be the norm, rather than the xenophobia that characterizes more recent arrivals?

And here's what troubles me most. In a world still coming to terms with the reality of climate change, the truth is that the number of global climate migrants and displaced people will soon dwarf the UN numbers cited above -- a lot more people are coming, and our recent record does not bode well. Will this recent ugliness mark each new unexpected arrival, or can we chill out and have a rational conversation about what our moral obligations and humanitarian response should be to the global realities ahead?

(The group No One is Illegal has produced an excellent fact sheet debunking six common myths about the Tamil refugee claimants. It can be found here.)