"If recall is successful, people in government will make decisions based on whether they will be re-elected or recalled instead of what's best for the province." -- B.C. Liberal MLA Eric Foster 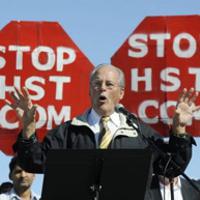 It's hard to underestimate the contempt and disdain B.C. Liberal MLAs have for the voters of this province.

But Eric Foster tries pretty darn hard to make it clear -- he knows better than you do what's best for the province -- so butt out!

What a concept. Elected representatives actually doing what the people who voted them into office want done, or lose their jobs.

Instead Vernon-Monashee MLA Foster and his B.C. Liberal colleagues are doing everything they can to overturn the will of the people.

And their financial supporters in big business are even trying to block democracy itself.

This week a coalition of big business groups who have given hundreds of thousands of dollars to the B.C. Liberal Party will be in B.C. Supreme Court in a legal action that could invalidate the Fight HST citizens initiative petition signed by 705,643 voters.

That's the initiative to kill the Harmonized Sales Tax -- the first-ever successful petition since the legislation was introduced in 1994.

I am very proud of my role working with Fight HST leader and initiative proponent Bill Vander Zalm to allow voters to democratically express their strong opposition to the tax.

But I am extremely saddened to see how the B.C. Liberal government, its business supporters and even Elections B.C. -- the independent body that regulates the initiative and all electoral issues -- have attempted to derail democracy.

Slamming the door to the legislature

Let's be clear. The initiative process cannot, unfortunately, force the government to kill the HST.

All this successful initiative does is require the government to either introduce the draft HST Extinguishment Act in the B.C. legislature -- or hold a non-binding province-wide vote on whether it should be introduced.

But once the HST Extinguishment Act has been formally presented in the legislature, the government need not even call it for debate.

Or the B.C. Liberal majority could bring the act forward for a vote and then defeat it.

Nonetheless, a coalition of B.C. business groups is intent on blocking the non-binding HST Extinguishment Act from even being presented in the legislature.

Why? The answer is obvious -- the businesses don't want B.C. Liberal MLAs to have to stand up in the legislature and vote in favour of the HST by killing the act.

And they are willing to spend tens of thousands of dollars in legal fees to spare their unpopular political party the embarrassment of publicly supporting the hated HST.

BC Elections halts the process

That's bad enough, and hopefully the court will quickly reject their arguments, but what's worse is that Elections B.C. won't even follow the initiative legislation that clearly states after the petition is verified it "must" be sent to a Select Standing Committee of the legislature.

Acting chief electoral officer Craig James, a clerk of the legislature filling in until a new CEO is appointed, verified the initiative by means of a letter to Vander Zalm but no public statement, despite the importance of the event.

And in that letter James said that in "deference" to the business coalition court case he would not send the initiative to the committee until "a final determination is rendered by the court."

It could mean months -- or even years if the coalition loses and then appeals the decision -- before the initiative gets to the legislature.

Just look at the seven years since the B.C. legislature was raided and subsequent political corruption charges were laid against David Basi, Bob Virk and Aneal Basi in a trial that resumes Sept. 13.

That's totally unacceptable and a violation of the Recall and Initiative Act, which gives no such powers to James to delay sending the petition.

The only possible grounds for a delay would be if a court injunction ordered Elections B.C. not to proceed -- but the business coalition has not even applied for one.

The B.C. Liberal MLAs who sit on the Select Standing Committee could correct Elections B.C.'s mistake by accepting Vander Zalm's suggestion that he send them the petition and HST Extinguishment Act to deal with directly, since it has been verified as passing.

"We should be the ones looking at it, not the courts. I think the committee could look at that and make sure everybody's got all the facts. Let's get it back to the Committee and move forward," he told the Kelowna Courier.

With NDP MLAs already in favour, Slater's support would mean half the committee agreed.

But Slater's enthusiasm only lasted one day. Likely until someone in Premier Gordon Campbell's office called the rookie MLA and straightened him out.

By Sunday, Slater was telling media that no, it was actually up to Elections B.C. and not the MLAs to send the initiative to the committee and he wouldn't accept it from Vander Zalm.

"It's got to come from BC Elections [sic]. We have no authority, period, without BC Elections being part of it. We've all heard the number, somewhere around 700,000 signatures, et cetera et cetera. And we've heard that BC Elections has said yes to all 85 ridings being complete. It's up to them to give it to us," Slater said, according to CKNW radio.

Ah yes, back to the independent Elections B.C. that won't follow its own legislative duties.

Go back to sleep?

But in case you are still worried about whether Elections B.C. can be trusted after verifying and then ignoring a petition duly signed by 705,643 voters -- one knowledgeable observer says just relax.

"I have complete confidence in Elections B.C.," he said.

We should all sleep easier now. Democracy is safe in B.C.