Former Premier Bill Vander Zalm and thousands of anti-HST petitioners made political history on August 11 when Elections BC verified that they satisfied the signature requirements for a successful initiative petition. 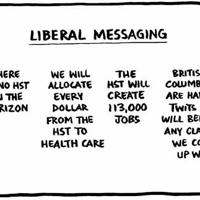 What wasn't expected by anyone except Vancouver Sun columnist Vaughn Palmer was that Elections BC would announce that it would not refer the petition to the standing committee on Legislative Initiatives until the court challenges are complete.

On August 10th Palmer wrote: "But the next step in the process will probably be hostage to the court challenge, which is scheduled to go ahead on Monday."

On August 11 he wrote: "But the law, which mandates specific timetables for most steps in the initiative process, is silent on how soon the petition should be forwarded to the committee. The lapse, whether intentional or not, has given rise to speculation about possible grounds for delay.

"Craig James, the interim chief electoral officer, has signaled a determination to remain "neutral" in the looming court battle over the HST and the initiative. On that basis, James may decide to hold off sending the measure to the committee, pending the outcome of the proceedings in court."

Palmer is a very insightful observer of B.C. politics. He may have realized on his own that James was about to frustrate over 700,000 British Columbians who signed the petition by refusing to forward it to the legislative committee, but it is also possible that someone whispered that suggestion in his ear.

No legal basis for delay

I beg to differ with Palmer's interpretation that the law is silent on how soon the petition should be forwarded to the committee. Section 10 of the act states that if the petitioner obtains the required signatures and satisfied the reporting requirements to Election BC, then "... the chief electoral officer must send a copy of the petition and draft Bill to the select standing committee."

Dictionary definitions of imperative include very important, vital, crucial, essential, urgent, of the essence and necessary. A delay of years while arguments wind through various appeals, perhaps to the Supreme Court of Canada, is a gross violation of the act and the meaning of must.

If this happened in France, there would probably be a general strike. In other countries, more violent results would be likely, but in Canada we will express frustration and ask the court to order the chief electoral officer to immediately exercise his duty. Meanwhile, thousands of volunteers who worked on the petition campaign will ready themselves for recall campaigns beginning in mid-November.

The front door to Elections BC proclaims, as does its website, that it is a "non-partisan Office of the Legislature". Thanks to the outrageous decision of the temporary chief electoral officer, who was appointed by the government without all party agreement, thousands of British Columbians may question whether the government and its business allies unduly influenced Elections BC.

Whether it did or not, the damage is done. Craig James is respected by both sides in the legislature, but he comes to the position of chief electoral officer after decades as a legislative clerk. Legislative clerks come from a culture where the government is always right; it always gets its way.

That may be the case when the opposition raises a point of order, but it shouldn't be the case for Elections BC.   We can only hope that the all party committee charged with finding a new chief electoral officer will do so before the critical recall campaigns get under way. It would not be healthy for B.C. politics to go through that process with the independence of Elections BC in doubt.  Whatever the thinking was behind the bizarre ruling of Elections BC to frustrate Section 10 of the Recall and Initiative Act, it will probably have the unintended consequence of making the work of recall much easier.