After the Deepwater well blew out, the first announcement from British Petroleum (BP) assured the public that "we have the best engineers in the world." Then they announced that the damaged well flowed at a rate of "one thousand barrels per day" (b/d). 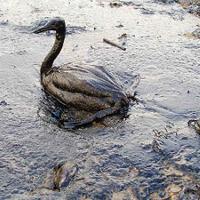 The Gulf Spill: Watch and Learn, BC Leaders

How do the "best engineers in the world" get this wrong by two orders of magnitude?

My father is a petroleum engineer. One of my earliest memories is sneaking into the Quonset hut near our home in Wyoming and tracing the swirling colours in drilling cores from thousands of feet under the earth. When I was a teenager, my father and his crew drilled the deepest producing gas well in the world at the time, 22,000 feet below the west Texas plains. He knows wells, and I've been writing to him for industry scuttlebutt about BP's Deepwater disaster.

Industry engineers have poured over BP's reports and correspondence, and the evidence paints a dark tale. Terry Barr of Samson Oil and Gas in Colorado published a summary of the analysis in the Wall Street Journal this week. These petroleum engineers know what they're talking about, have reviewed the data, both public and private, and have pieced together the following sequence of tragic events.

By mid-April, 2010, the BP Deepwater rig crew had tapped into an oil and gas reservoir, 18,000 feet deep, in 5,000 feet of sea water. At this depth, normal pressure would be about 8,000 pounds per square inch (psi), but actual "formation pressure" can build up to twice normal, so the rig crew would have been prepared for 16,000 psi. That is a lot of pressure. A typical fire hose operates at about 100 to 300 psi.

Having reached the oil and gas formation, the crew had to temporarily shut down the well while they replaced the drilling rig with a production rig. To do this, they need to seal off the bottom of the hole with a cement plug, called a "shoe."

The well is lined with "casing" pipe, seven inches in diameter at the bottom. This means the hole has an area of about 38 square inches, and at 8,000 psi, this amounts to about 300,000 pounds of pressure on the shoe plug. The world's strongest human can resist about 500 pounds for about two seconds.

According to documents released by the U.S. House Energy and Commerce Committee this week, BP officials had rejected a $7 million casing liner and a time consuming procedure to install more casing stabilizers. "It will take 10 hours to install them. I do not like this," a BP executive insisted. "Who cares, it's done, end of story, will probably be fine." Six days before the blowout, in an email, BP engineer Brian Morel called Deepwater a "nightmare rig" due to these cavalier safety risks.

To shut down the well, the crew ran a series of "casing integrity tests" to confirm the shoe is sealed, and no pressure is leaking from the oil and gas pocket into the well. While conducting these tests, the BP crew encountered three red flags that told them they had a "wet shoe," meaning that oil and gas were leaking into the well. The BP brain trust ignored these three warnings.

When the crew tried to fit on the top plug, it did not sit properly, a clear indication that the bottom cement seal could be leaking pressure into the well. This was Red Flag Number One.

The rig supervisor reportedly called his BP bosses, but someone along the chain of command decided it wasn't worth the time and expense to reseal the shoe plug. According to an Associated Press, Doug Brown, the rig's chief mechanic, witnessed a dispute among managers on the day of the explosion. Clearly, the rig engineers had conflicts with the BP executives. Some wanted to mutiny.

After the troubling top plug incident, the crew ran a standard "negative pressure test." They released pressure in the well to see if the pressure built back up. If it does, there's a problem. It did. They had a problem. The bottom shoe was not sealed and oil and gas was leaking into the well.

This was the second Big Red Flag. According to Terry Barr in the Wall Street Journal, "At this point, a decision should have been made to do a remedial cement job; this is an expensive operation, but having seen a 1,400 psi response, there was no choice." A cheaper option is a cement plug anywhere along the well casing, but once again, the BP brain trust decided to proceed without doing either of these things.

In a final stage of shutting down the well, the rig crew removed the heavy drilling mud, which holds the reservoir pressure down until the well is sealed. They replaced the mud with sea water, which is only about half as heavy. At 8:20 p.m. on the night of the explosion, as the well filled with water, the crew recorded that more mud flowed from the well than water going in. Red Flag Number Three!

"One can conclude," explains Barr, "that hydrocarbons were flowing." This means that pressure from the oil and gas reservoir was clearly leaking through the bad seal on the bottom. Safety and common sense suggest they should stop, plug the well, and seal it off. They did not do this.

By 8:34, for every three gallons of water going into the well, four gallons of mud came out. Gas and oil was clearly moving up through the well. They crew pushed on. The rationalizing may have gone something like this: "Oh, it's held so far. Maybe we're okay. Besides, we have blow-out preventers if the reservoir pressure pops the shoe."

But blow out preventers (BOPs) can fail and are intended as a last resort. Furthermore, the engineers did not know the reservoir pressure, so they could not be certain that the blow-out preventers would be enough. Finally, the pressure rose slowly -- like boiling a frog -- so the main BOP on the sea floor had already allowed some pressure to pass.

At 9:30 p.m. on April 20, the rig crew tested the water again and detected a pressure increase. This was Red Flag Number Three showing up again, so call it Red Flag Number Three B. At 9:49, oil and gas reached the rig, ignited, blew up the rig, killed 11 people, devastated the Gulf's coastal economy, and initiated one of humanity's worst ecological disasters.

In addition to 11 dead human victims, the blowout has killed thousands of seabirds, turtles, fish and other marine animals. Something like 50,000 to 150,000 barrels of oil per day (or more) pours into the Gulf of Mexico. That's two Exxon Valdez disasters each week. On top of this, BP has added over one million gallons of toxic Corexit dispersant, banned in the UK, which contains the neurotoxin 2-Butoxyethanol, arsenic, cadmium, cyanide, and mercury.

According to my father, "the relief wells are the best answer to control the blowout. But if not contained, the flow of oil and gas could continue for years." If the relief wells don't work, BP is considering a nuclear blast to close the hole. This however could just as easily make the situation worse. It is possible that the Gulf seabed has already been fissured and that oil and gas is now escaping from multiple locations. The nuke option could aggravate this problem.

BP, by all accounts, is guilty of criminal negligence, but it would be a mistake to pass this off as an anomaly. These safety violations reflect the habits of industrial culture. BP will send some scapegoat packing and claim they've learned their lesson. But we've witnessed this before at Bhopal in 1984, at Chernobyl in 1986, at the Marcopper Mine in the Philippines in 1996, in Seveso Italy, at Love Canal, Banqiao Dam in China, gold mines in Romania, and in Minimata Japan for four murderous decades, as Chisso Chemical poisoned an innocent fishing village.

This disaster isn’t just human error. It is the natural consequence of our society's practice of harvesting nature for profit. Corporations have demonstrated no ability to regulate themselves or operate on moral principles. Morality is too expensive. It is cheaper to cut corners on a hundred oil wells and pay the fines on the one that blows out. It is cheaper to dump mercury and cyanide and dioxins into rivers and bays, and then wait to see if the poor inhabitants have the muscle to make the company pay. It's cheaper to obliterate nature, finance your own "citizen group" to sign off on your treachery, and pay squadrons of lawyers to avoid liability.

We took the easy stuff first. Now we go higher into the mountains for lithium and copper, deeper into the forest for ancient trees, and deeper into the earth's crust for oil and gas. Damn the cost. The rich consumers will pay and pelicans have no lawyers.

The Deepwater blowout that now stacks up among the greatest ecological holocausts of all time was not just an accident. It is a symptom of a civilization's style.