The three most recent federal elections have resulted in minority Parliaments. There are a number of reasons for this. 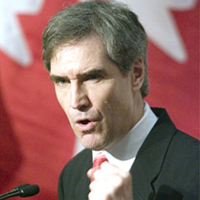 The Coalition Deserves to Live

One: Stephen Harper was able to merge the Reform/Alliance and Progressive Conservative Parties in 2003, ending the split in right-of-centre votes and the artificial stranglehold over Ontario's Parliamentary representation that the Liberals had enjoyed during the Chrétien era.

Two: The Bloc Québécois, which first burst onto the scene in 1993, has turned out to have staying power. It has garnered between 40-49 per cent of the Quebec popular vote and between 40-54 seats in most of the six elections since then. The result is that the Liberal Party, which had been able to count on a strong Quebec contingent when it was Canada's "governing party" through much of the 20th century, has been reduced to minority status in that province.

Three: The NDP has come back from its near-collapse in the 1990s and can now count on popular support in the 15-18 percent range and between 25-40 seats in the Commons.

Four: The Greens have made their presence felt on the federal scene. Though they have not been able to elect an MP to date, they have begun to poll something approaching 10 percent of the popular vote.

The split in opposition to the Conservatives -- four parties in Quebec, three in the rest of Canada -- plays beautifully into Stephen Harper's hands. Though the electoral vote for the Conservatives hovers around the 35 per cent range, the split in Opposition forces has allowed his party to achieve a plurality of votes and seats in the past two elections. The same pattern is likely to reproduce itself the next time Canadians go to the polls. Roughly 65 percent of Canadian voters do not want a Conservative government for a whole variety of reasons -- its contempt for Parliament and for an independent civil service, its poor environmental policy, its gutting of cultural programs, its weakening of Canada's international position as a respected middle power.

Yet they will find themselves forced to look on as the Conservatives continue to govern the country.

What is to be done? At the very least, the caucuses and leaders of the three opposition parties whose principal support lies outside Quebec need to discuss amongst themselves the possibility of not contesting a sufficient number of seats across the country so as not to split the anti-Conservative vote.

Much in common, much to gain

Although the Liberals, the NDP and the Greens have their own policies and programs, there is sufficient common ground amongst them to permit such cooperation.

One possible suggestion would be for the three parties in question to focus on 60-80 seats where a three-way split in opposition party votes has allowed the Conservatives to win ridings with fewer than 35 percent of the votes, or come within striking distance of defeating current Liberal or NDP sitting members. The party with the best-placed candidate in 2008 would then be able to run its candidate, with the others stepping down. To ensure the Greens some representation, in particular the seat where its leader chooses to run, the other two parties would give its candidate a clear run.

Agreeing to an electoral arrangement of this sort, or some variation thereon, would not mean that a formal coalition among the three parties would necessarily follow an election. But it would be important that the parties to the arrangement reach a modest set of agreed-upon common policies, even while continuing to differ on others.

On Jan. 23, 2010 thousands of Canadians took to the streets to protest the proroguing of Parliament by Stephen Harper for the second time in two years. Those same Canadians and millions more who support their views are looking for a workable alternative to an electoral system that allows a party with little more than a third of the popular vote to ride roughshod over the views of a clear majority of Canadians.

We call upon the leaders of the Liberal Party, the NDP, and the Greens to heed the call for an electoral arrangement amongst them prior to the next federal election.