It was extremely unlikely that the runoff election next weekend would have saved U.S. and Canada from the continuing catastrophe in Afghanistan but at least there was a chance. There could have been a sheen of legitimacy -- provided the second farce was a little less farcical than the first. 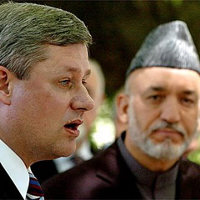 But it wasn't to be and now the whole picture is sure to become more grotesque than ever. With Abdullah Abdullah pulling out, the U.S. will have the worst of both worlds in President Karzai -- a man they detest and don't trust and who can claim virtually no legitimacy, but who they cannot get rid of. Declaring him president is actually illegal because there is nothing in the Afghan constitution that allows for it. But fearful of more violence and a voter turn-out that might go as low as single digits, the West had no choice.

Abdullah pulled out for both mischievous and legitimate reasons. He knew he would lose and this way he cripples the credibility of his rival and preserves his own stature and perhaps even enhances it. But what has not received much coverage -- or not enough -- is his demand that that the Afghan Independent Election Commission be purged of its worst Karzai sycophants, the ones who ensured that voting places be opened (and used for ballot stuffing) where everyone knew no one would vote. The whole commission was appointed by the government and were it not for the U.N.-backed Electoral Complaints Commission, the phony election would have gone unchallenged.

Were it not so tragic, were we not looking at several more years of carnage and misery. the whole situation would be comical. The most powerful empire in the history of the world has, from the start, been as dumb as a bag of hammers. An empire at its peak would hire the best talent to design its adventures; one in the late stages of decline thinks it can get by with ideology and bombs. The Taliban, whatever else they are thinking, must be shaking their heads at the breathtaking incompetence of their adversary. This what Canada has signed on to.

For the next five years, the U.S. has to accept Karzai because, of course, he is no longer just an appointee of the empire, he is the elected president. Well, sort of elected. The Canadian government has to accept as legitimate someone who literally nobody else believes has any moral authority. It doesn't get much worse than that. Stephen Harper and Obama "warned" Karzai that he would have to deal with corruption. And if he doesn't? Short of assassinating him or allowing him to be killed (I am sure it is an option on the intelligence table), there is nothing they can do. Any of the ways of punishing Karzai for non-performance would just make the situation worse.

And you can hardly blame Karzai. He was given an impossible job: create a democracy out of total chaos, ancient tribal hatreds, and a total lack of civil society institutions and tradition without which pluralist democracy is next to impossible. To maintain even the semblance of governance, Karzai had to enlist the only people who could actually claim to control the country -- the murderous war criminals of the Northern Alliance and other warlords around the country. The "mayor of Kabul" facing a nation with no loyalty to a central government has few tools at his disposal -- bribery, forbearance of the drug trade, and acquiescence to hard line Islam. Most people educated enough to even understand the role of government let alone play a role in it, left the country after the Taliban took power.

There is only one way out now, and according to some analysts Obama is already designing the exit strategy by initiating talks with so-called "nationalist" Taliban as opposed to the more fundamentalist version. These negotiations could focus on what Obama has said repeatedly: that his principal goal is to ensure that al Qaeda does not return to Afghanistan and once again set up its "training camps" to plan attacks on the U.S. That would mean a deal with the Taliban allowing them a major role in the governance of the country and acceptance of the continuing dominance of the warlords in the North, in return for the Taliban breaking ties with al Qaeda and their foreign fighters.

That might actually appeal to most Afghans, who are intensely nationalist and suspicious of foreigners, even Muslim ones. But handing power over to the Taliban is not much easier than fighting them. The U.S. will want something for the lives and treasure lost -- at the very least a contract for a U.S. gas pipeline through the south of the country. And there is the sticky problem of Mr. Karzai -- the "legitimate" president, symbol of American democracy. Just how the U.S. will now justify negotiating with the enemy, if it means Karzai losing authority, is unclear.

As if we needed another symbol of just how impossible this war has become, five British soldiers were killed this week by one of the policemen they were training. This training is the key element to the only exit strategy the West has. As for the Canadian government, it is acutely aware of the incredible mess it is in. But Harper will not lose face and his dedication to the empire runs deep. And so far the whole political elite, Liberals and Conservatives, are taking the line that in order to do development you have to have security. In other words, keep doing what we have been doing and hope for totally different results.

According to Steve Staples of the Rideau Institute, that will mean the death of approximately 60 more Canadian soldiers and the expenditure of another $4 billion up to December 2011, when the current mission is supposed to end.