The British Columbia government has released more documents that show it considered firing the large technology company that’s under contract to build the new BC Bid website.

Until recently Citizens’ Services Minister Lisa Beare has consistently claimed the $16.3-million project by Canadian tech firm CGI Information Systems and Management Consultants Inc. was on track. But since it was first announced in 2017, the new site has had its launch date delayed at least three times and its budget increased by 80 per cent.

A presentation that Victoria company 7 Consulting Inc. prepared as a briefing for the associate deputy minister of Citizens’ Services outlines a choice between “Performance Manage Vendor” and “Terminate Relationship.”

If the government continued on the path it was on, it would need to “Put measures in place to performance manage vendor and project, and keep team critically focused on delivery,” the presentation said.

Or it could begin the process of getting out of the contract. That would mean it would have to “Engage with litigation lawyers to assess termination options” and “Develop plan to wind down project.”

The presentation, dated Feb. 25 and likely from 2020 though no year is specified on the document, lays out a choice for the ministry between getting CGI to meet its commitment to deliver the new BC Bid system within six months, or getting out of the contract and starting over with a new procurement process to find another vendor with a different product.

It listed questions that needed to be addressed:

That the questions needed to be asked at all is an indication of just how poorly the important project had gone.

Each year public bodies including provincial ministries, Crown corporations, health authorities and municipalities make some 9,000 purchases through the BC Bid system for goods and services worth about $7 billion.

As far back as 2010 government officials believed the dated BC Bid system needed to be replaced. In 2017 the government announced the replacement project, saying at the time that it was a first step towards overhauling the provincial government’s approach to procurement.

When CGI won the initial three-year $8.9-million contract to manage the project it committed to work with California company Ivalua Inc., using its off-the-shelf “procure-to-pay” application and customizing it for the province’s needs.

Headquartered in Montreal, CGI is a publicly traded company worth around $24 billion and had some $12 billion in revenue last year.

The BC Bid replacement was originally supposed to be ready in 2019. The government has since moved the deadline to 2020, then to 2021, and now to this June.

In late 2020, with sources saying the project had been badly bungled, The Tyee filed a request under the Freedom of Information and Protection of Privacy Act seeking key documents. The government released some records earlier this year, enough for The Tyee to confirm that the project was struggling and facing rising costs.

Then in late April an FOI analyst wrote, “After the closure of this file, the ministry identified supplemental records which have been deemed responsive to your request” and released another 46 pages.

Some parts of the new batch of records were censored under the section of the act that allows public bodies to withhold records if their disclosure would be harmful to the business interests of a third party.

Despite the severing, the records show that ministry staff were looking at the procurement systems used elsewhere in Canada, including by provinces, utilities and municipalities. Many used a competing product, SAP Ariba, and found it satisfactory despite it having its own challenges.

Ivalua is more commonly used in the United States and was seeing improving ratings, the Feb. 25 presentation said. “Once implemented the product performs as it should,” it said. “Development, configuration and change management is best supported when internal client teams are Ivalua Certified and learn the tool intimately, significantly saving money and time.”

It found that the “feel is rather bland/old” and noted that “Ivalua acknowledges the need to find ways to support public sector clients better.” The product is more commonly used in the private sector, it said, and in an appendix noted that many clients find it smart, flexible and easy to use.

There were, however, issues with CGI and its inability to deliver what it had promised the province using Ivalua’s product.

“What was bid is not necessarily reflective of what CGI and vendor are capable of — which will likely result in the Province paying for functionality that should have been part of the contracted scope,” the presentation said.

Nor was CGI likely to meet the deadline and there were issues with the arm’s length relationship that would likely cause more issues and was “not ideal for long term sustainment.”

But despite the problems, the contract would be difficult and expensive to get out of, the presentation said. “The upfront conditions of the contract make the options for terminating complicated and costly.”

It concluded: "Are there other options? Yes, but not without significant cost, policy considerations, and potential legal ramifications.”

A second presentation in the response package was titled “Action Plan: Getting to Go Live.”

Dated March 2, 2020, it said it had become necessary to delay the deadline and lower expectations. “Project success will require acceptance of a new timeline and deferral of scope to post go-live,” it said.

The ministry would also need to have a firmer hand on the project. “Strengthen governance structure, processes, reporting and decision-making,” it advised. There was a need to “investigate what CGI is working on, strengths and weaknesses” and to create more direct communication between Ivalua and the government’s project team.

Despite all the shortcomings of the project, it advised, “Declare victory on Project Team accomplishments to date, communicate and celebrate.” 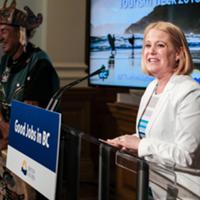 When the presentation document was created the plan was to decommission the old BC Bid and launch the new one by the end of 2021.

The initial contract finished at the end of 2021 and earlier this year the ministry negotiated a two-year extension to the contract with CGI that will add $7.4 million to the money the province has already spent, bringing the total cost to over $16 million.

On April 12, the government announced businesses and suppliers could begin registering on the new BC Bid site.

Public sector bodies were to start creating their accounts later in April, it said, and would begin posting opportunities on the site “as early as” June.

During the debate of her ministry’s budget in April, Beare was asked if she’s satisfied with CGI’s performance. “In terms of where we are today, I’m happy with the work we are doing today with BC Bid,” she said.