The changes come as the BA2 Omicron sub-variant now accounts for about 75 per cent of cases in B.C. It’s 20 to 30 per cent more transmissible than the original Omicron variant which ravaged hospitals and sent record numbers of health-care workers home this winter.

Henry confirmed the BC Vaccine Card program will end on Friday. People will no longer need to show proof of two vaccine doses to eat at restaurants, see movies, attend indoor concerts and sporting events or go to the gym.

Vaccines will also no longer be required in post-secondary residences, and businesses no longer need COVID-specific safety plans.

COVID-19 data reporting on cases, hospitalizations and deaths will move from daily to weekly.

The changes, originally announced last month along with the March 11 end to the mask mandate, come as modelling suggests another wave of BA2 could push hospitals and health-care workers to the brink.

“We are in a relatively good place,” Henry said today. “Hospitalizations and deaths in B.C. continue to decline… and we continue to see a really low death rate.”

B.C. has seen declines in all these metrics, but those trends have slowed and begun to plateau in recent weeks.

People continue to die of COVID, with 575 people dying in the first three months of 2022. That’s just under one-fifth of recorded deaths since the pandemic began in March 2020.

Test positivity rates among the individuals eligible for PCR testing have risen from 5.6 per cent on March 20 to 7.3 per cent, and reached 18.4 per cent on Vancouver Island on March 31.

Henry acknowledged “we are likely to see a slight increase over time in the next two or three months,” but said B.C.’s high level of protection from vaccines would help temper future transmission, hospitalizations and deaths.

Experts have warned that the growth of cases in B.C. depends on how quickly immunity from booster shots wanes in those most at risk of hospitalization and death.

Last week, the U.S. Centers for Disease Control and Prevention recommended a second booster shot for all adults over 65 and those older than 50 with chronic conditions.

In B.C., second boosters will be made available to residents of long-term care and assisted living, as well as seniors in the community over 70 and Indigenous people over 55 in the coming weeks. Clinically extremely vulnerable people will also have access to another shot soon.

While two doses of vaccine provide strong individual protection against severe illness and death from Omicron in younger people, boosters significantly reduce infection and transmission, particularly for people over 70.

But only 59 per cent of the eligible population in B.C. have received two shots and boosters. Immunity for many elderly and vulnerable people who received their boosters more than four months ago is already waning.

When asked by The Tyee why protective measures like the mask and vaccine mandates were being lifted when modelling outlined a potentially serious sixth wave, Henry said high population protection and lowered transmission made it a safe time to do so.

“There's no magic time when there will be zero risk,” she said. “We have been through a very traumatic period of two years now… we’ve always had to balance those risks.”

Last week, human rights commissioner Kasari Govender published a letter to Henry, asking her to reinstate the mask mandate to protect the most vulnerable.

And members of public health advocacy group Protect Our Province BC have said dropping protections right now is reckless. 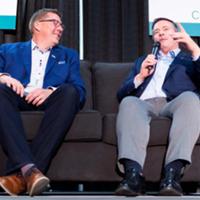 Don’t Be Fooled by the Great Pandemic Denial

“Without focusing our efforts on stopping viral transmission, we will continue to see wave after wave of COVID-19 infections with the attendant toll it takes on our health-care system, our citizens and our economy, not to mention the devastation of long COVID disability each wave leaves behind,” Lyne Filiatrault and Brenda Hardie, both doctors, wrote in a recent open letter.

BC Green Leader Sonia Furstenau also criticized Henry and the government’s approach, stating they had failed to adequately educate British Columbians on the risks and mechanisms of COVID-19 infections.

“Prince Edward Island and Quebec have both extended their mask mandates until the end of the month in order to manage rising cases,” she said in a statement. “It’s clear that the BA2 variant has taken over in B.C., and yet we continue to pretend that we are somehow going to avoid the impacts we’re seeing elsewhere.”

Henry defended the strategy and said B.C. was in a better position to ease measures than ever before.

“It will be a transition period for all of us,” she said.