Between 2016 and 2018, I wrote a lot of stories about renters who were facing eviction from the homes they’d rented for decades. There was the 60-year-old woman who had been living in her car in North Vancouver for a year, the 79-year-old Costco worker who was facing homelessness in Coquitlam, and the 69-year-old actor who signed a move-out agreement while he was struggling with a serious head injury and his wife was in hospital.

People often cried on the phone as I interviewed them, terrified they would become homeless or have to move far away from the community they’d lived in for years. Some were experiencing serious health issues from the fear of losing their housing.

Back in 2016, soaring home prices impacted the rental market. That year, Metro Vancouver home prices jumped 32 per cent while rents saw a 6.4 per cent increase — the highest ever recorded by the Canada Mortgage and Housing Corporation.

Now, based on data pulled from rental listings posted on Craigslist, it looks like the region could again be about to experience another big jump in rents.

Plotting the trajectory of rent costs

Data from Craigslist rental listings for the Metro Vancouver area shows that between Dec. 2020 and Dec. 2021, rents listed on that site climbed by 10 per cent. Landlords started listing units at higher rent rates in May 2021, and the trend continued into the fall and winter.

The increase over just a few months is similar to what happened in 2016, when Craigslist rental listings provided an early warning that rents were skyrocketing. Between June 2016 and June 2017, listed rent rates on Craigslist rose by 11 per cent. The next year, they jumped another 11 per cent.

Just like in 2016, the escalation in rents is happening alongside a rapid spike in home prices. According to the Real Estate Board of Greater Vancouver, home prices in the Lower Mainland rose by 28 per cent between February 2021 and February 2022.

CMHC’s annual rental market survey is considered the gold standard of rental data for Canada, but the survey is completed just once a year and published in January or February. Tracking Craigslist data is messier, but it’s one of the few ways to get timely data on what’s happening with rent rates from month to month.

The data in the chart above includes both furnished and unfurnished apartments for one, two and three bedroom apartments; keep in mind that furnished apartments are usually more expensive. Craigslist rent listings also show what landlords hope to get for their suites. For a couple of months in 2020 (August and September), the data scraper program built for me by a colleague (OK, actually by my husband, thanks honey!) was blocked from grabbing that data. The program also hasn’t been able to scrape any data since January 20.

Between 2016 and 2019, CMHC’s annual rental market survey showed rents rising between 4.7 and 6.4 per cent per year. But for the past two years, CMHC’s survey has shown rent increases slowing down a lot. In 2020 — when pandemic restrictions caused a slow-down in the rental market — year-over-year rent growth slowed to 2.7 per cent. It fell further in 2021, to 1.9 per cent.

Those years coincided with pandemic-era restrictions on rent growth and evictions, as well as a general slowdown in market demand, with fewer immigrants and international students arriving in the region because of COVID-19 impacts.

Because of concern about shaky economic conditions caused by the pandemic, the provincial government placed a moratorium on evictions from March to August 2020. In 2021, the annual allowable rent increase — normally around two per cent — was set at zero per cent. In 2022, the annual allowable rent increase, which applies to existing tenancies, has been set at 1.5 per cent. (In B.C., rent control only applies to existing tenancies, meaning that when tenants move out, landlords can raise the rent by an unlimited amount for the next tenant.)

CMHC’s latest rental market survey was published in February, but the survey actually takes place in the first two weeks of October, and reflects market conditions at that time. We’ll have to wait another year for CMHC’s 2022 survey, but in the meantime, the Craigslist data gives us a look at what’s been happening since the CMHC surveyors put down their phones.

It’s a scary picture for vulnerable renters, especially those who live on fixed incomes and can’t afford to pay market rents. People who rent in the secondary market — like condos or basement suites — are also at a disadvantage, because they have fewer protections against eviction.

Some protections against ‘renoviction’

Still, there have been a number of changes that might help protect renters this time around.

Between 2016 and 2018, the lure of higher rents created an incentive for landlords to try to evict tenants, often by claiming they needed buildings vacant in order to renovate. Some cities like New Westminster and Port Coquitlam put extra protections in place to try to prevent that behaviour. The provincial government has also made changes: landlords who want to evict tenants to complete renovations now have to apply for an order of possession from the Residential Tenancy Branch, and an RTB arbitrator will decide if ending tenancy is the only way to complete the work.

Owners of secondary market properties often evict tenants by saying they need the suite for their own family member, but that reason for eviction was often being abused and landlords were simply re-renting the suite at a higher price, according to rental advocates. In October 2017, the B.C. government changed B.C.’s Residential Tenancy Act to increase the amount of compensation tenants can get — from two months of rent to 12 months — if they can prove their landlord didn’t actually use the rental for their own use after the eviction.

The Metro Vancouver region as a whole has been building new purpose-built rental, with 10,000 units added in the past 10 years. That’s a positive for renters, said Jill Atkey, the CEO of the BC Non-Profit Housing Association. 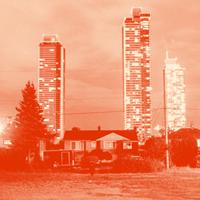 But take a closer look at those numbers, and a concerning trend emerges. We’re still losing older, more affordable rental buildings in neighbourhoods like Marpole in Vancouver and Metrotown in Burnaby. In total, Burnaby lost 602 rental units between 2020 and 2021, while 88 units were lost in Marpole and East Vancouver, and 128 units were lost in the City of North Vancouver.

While Vancouver more than made up for those lost units with new builds, it’s unlikely that people who were renting in older buildings will be able to afford the market price of a newly-built apartment.

“When we look at these numbers, we see that less than a quarter of market purpose-built rental units are affordable to households earning less than $48,000 a year, which actually is the median renter household income in the province,” Atkey warned.

“So there's an incredible squeeze there. And we know that there is no new market rental supply that will be affordable to this group.”