Managers of an outdoor overdose prevention site in Vancouver’s Downtown Eastside are worried about how they’ll continue to offer the lifesaving service after learning they need to vacate their space by the end of March.

For the past year, the Overdose Prevention Society has operated the site at a parking lot at 99 W. Pender Street. At the site, trained staff and volunteers are on hand to perform first aid and administer the overdose reversal drug naloxone to anyone who overdoses.

The site is the only outdoor site in Vancouver that welcomes people of all genders and allows smoking as well as other forms of drug consumption.

Vancouver Coastal Health says it asked the property owner, Kenstone Properties, for a lease extension, but the request was denied. Leasing the site for use as an overdose prevention site was always intended to be a temporary arrangement during the COVID-19 pandemic, said Ming Lim, an employee of Kenstone Properties who spoke to The Tyee at the company’s office.

The 11,800-square-foot site at the corner of Pender and Abbott streets is valued at $25 million, according to BC Assessment.

“It is a development site, there’s no denying that,” said Lim. “Whether that takes form under our ownership or another owner, we don’t know.”

Sarah Blyth, executive director of the Overdose Prevention Society, said it’s unclear where the outdoor site will move to, but she warned the relocation could lead to more overdose deaths.

Last year, 2,224 people died of overdoses in B.C., more than any other year in the province and a 26 per cent increase from the number of deaths in 2020. Blyth said around 500 people currently access the site daily. Vancouver Coastal Health said the outdoor site at 99 W. Pender is the busiest inhalation site in the region covered by the health authority, with 3,000 to 5,000 visits per week.

“People will certainly die when we move. People will be confused about where to go, and some people are red-zoned from certain areas,” Blyth said, referring to court-ordered conditions that can limit where people are allowed to go.

“It’s so complicated — moving us can be tragic. My preference is that when we find a place, it’s a place that we can stay until the [toxic drug] crisis is over.”

Blyth and other community volunteers opened Canada’s first overdose prevention site in a vacant lot next to 58 E. Hastings in 2016, as overdose deaths were climbing. The model provided a lower-barrier alternative to safe injection sites, which at the time took a long time to get approval for. 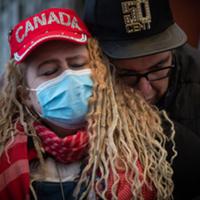 The Overdose Prevention Society later operated an indoor overdose prevention site at 58 E. Hastings with an outdoor space next door. In 2020, the indoor site moved across the street to make way for new housing developed by BC Housing, and the outdoor site found a home at 99 W. Pender.

Blyth said the location of the current outdoor site at 99 W. Pender works well for clients who use the site. She worries that if the outdoor site is moved too far away from the heart of the Downtown Eastside at Hastings and Main, people will stop coming, will use drugs alone or in the alleyways, and will be more likely to die of an overdose before help can arrive.

The outdoor site has also been used to host memorials every Monday, giving people a chance to remember and grieve loved ones lost to the overdose crisis.

The city says staff are working with Vancouver Coastal Health to find a permanent home for the outdoor site, “including outdoor inhalation tents and safe access to washrooms.”