A small northern B.C. First Nation is calling on the province to provide booster vaccines immediately as COVID-19 infections surge across the North.

The Wet’suwet’en First Nation, a community near Burns Lake that is part of the Wet’suwet’en Nation and also a member of the Carrier Sekani Tribal Council, has lost four Elders and one younger community member in less than a year, says Chief Maureen Luggi.

They included Luggi’s mother, Hereditary Chief Nagwaohn (Sophie Ogen), who died Oct. 9 after testing positive for the illness. Since her mother’s death, Luggi said four additional matriarchs have tested positive in the tight-knit community of about 250 people, who live both on and off reserve.

All had received their first two vaccine doses, Luggi said.

But she believes that the effects of the first two shots may be beginning to wear off and that boosters would help to keep residents safe.

Luggi said boosters were originally promised by September but that the province is now saying they are expected early in the new year.

On Friday, the First Nation released a statement calling on the province’s Health Ministry to immediately begin administering COVID-19 booster shots to eligible members of the community, citing the recent spike in cases.

It also implemented strict COVID-19 protocols and is working closely with Carrier Sekani Family Services to perform testing and contact tracing, Luggi added. Those tests are expected to reveal more cases this week.

“We don’t understand the rationale for bringing the booster in January when we’re in wave four, and we understand we haven't reached the peak yet, yet there’s people dying and the hospitals are full,” Luggi said. “At this point in time, we have sent it to the minister of health [Friday] morning, and we have had no reply as of yet.”

In a statement to The Tyee, provincial health officer Dr. Bonnie Henry said she and First Nations Health Authority acting chief medical officer Dr. Shannon McDonald continue to review vaccine efficiency and that First Nations with recent transmissions have been prioritized for first and second doses, in addition to boosters for Elders and seniors.

In the email sent late in the day Friday, Henry said public health had not received a formal request for booster doses from the Wet’suwet’en First Nation.

“Early in the immunization campaign, we prioritized First Nations communities for vaccination,” she said, noting that Indigenous communities are at a higher risk of COVID-19.

Henry added that third doses are currently being delivered to those who don’t have a strong immune response because of a health condition or because of certain medications.

“We are also providing a booster dose to those living in long-term care to provide further protection to this vulnerable population. Some Indigenous peoples are included in both groups,” she said.

The region surrounding Wet’suwet’en First Nation to the west of Prince George has experienced among the highest COVID-19 rates since numbers began to soar across the North last month. It has also seen slow vaccine uptake, with vaccination rates in the region 10 per cent below the provincial average.

The high case numbers have affected other small Indigenous communities in the area.

On Oct. 8, Lake Babine Nation to the west of Wet’suwet’en First Nation declared a state of emergency. It implemented a four-week circuit breaker lockdown until Nov. 5 designed to curb rising COVID-19 numbers in its five communities. Restrictions included banning non-essential travel and gatherings.

At the time, the nation said two to three community members were testing positive each day and there were at least 12 lab-confirmed cases, with many others awaiting test results. The nation has more than 2,500 members, most of them living on a reserve within the municipal boundaries of Burns Lake.

The rate of spread had eased by Monday, according to Emergency Operations Centre director Bernard Patrick, but new cases are still occurring regularly in the community. Patrick blamed gatherings over the October long weekend for fuelling transmissions.

On Oct. 21, Witset First Nation shut down local organizations and education facilities due to rising COVID-19 numbers in the community. 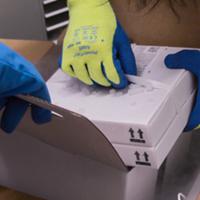 My Home Community Urgently Needs the Vaccine. Who Will Hear My Call?

“We have really close-knit communities and some of our Elders are living with family members... so it's really critical and they’re at risk,” she said, adding that it’s important they receive the third shot as soon as possible.

“It’s really critical. When an Elder passes the history goes with them, and it’s very critical that we get those boosters.”

Mueller added that in the Saik’uz First Nations, vaccinated members were getting less severely ill and then passing the virus onto those who remain unvaccinated.

But she said numbers of those getting their first and second doses have increased with the recent outbreaks.

The nation has been putting some members up in hotels to keep them safe, Mueller said.

“Some of them who got sick came in as soon as they were well and they got their first shot,” she said. “We’re working 24-7 to try to make sure that our communities are protected. We definitely need that extra support from the province.”

Between Oct. 14 and 20, Nechako and Burns Lake, local health areas directly west of Prince George, had among the highest per-capita COVID-19 rates in the province, with 80 and 84 cases respectively per 100,000 residents, according to the BC Centre for Disease Control. They were closely followed by Peace River South in the northeast and Quesnel in the Interior.

Far surpassing those communities was the Nisga’a local health area, in the province’s northwest, which logged more per-capita cases in the same time period as Nechako and Burns Lake combined, at nearly 200 cases per 100,000 residents. 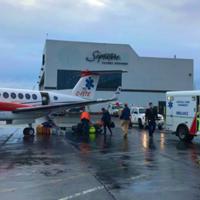 In an update posted Friday to the Nisga’a Lisims Government website, the nation’s health authority was reporting at least two COVID-19 clusters in the Nass Valley, with 29 active cases. All the nation’s villages are affected, it said.

The nation also fought to be prioritized for vaccinations earlier in the pandemic.

At the time, the province also said it was prioritizing communities experiencing high rates of the virus, with Kitselas First Nation bumped up the queue when there was a cluster in the community near Terrace.

On Sept. 2, the province implemented restrictions specific to the North, which included limiting indoor gatherings to five guests or one additional family. Despite the move, the province announced Sept. 21 that it would begin transferring critical care patients out of the region in an effort to relieve the strain on northern hospitals.

A week ago, the province doubled down on initial restrictions when it banned all gathering amongst unvaccinated residents in the North in an effort to deal with the “enormous challenge” the virus was presenting to a strained medical system.