The province is preparing to fly intensive care patients from northern B.C. to other parts of the province as COVID-19 cases surge in the Northern Health authority, filling hospitals and putting strain on local health services.

“When we talk about moving people, we do that with great reluctance,” Health Minister Adrian Dix said at Tuesday’s provincial COVID-19 briefing.

“We need to reduce pressure on the North and, as such, we’re adding additional capacity outside of the North so we can provide the care to the patients who need it.”

That capacity includes 10 beds in the Lower Mainland and five on Vancouver Island designated for patients from Northern Health, where vaccination rates have lagged well behind the rest of the province.

So far, Dix said, 12 patients have been transferred out of the region, nine of them positive with COVID-19.

“Clearly, this is less than ideal. It will be difficult for those patients and their families and their loved ones,” he said. “But these are necessary steps to ensure people in the North have access to quality care, and to support our health-care workers in the North.”

Across the province, 156 people with COVID-19 are in intensive care, 20 of them in the Northern Health authority. That number does not include six patients transferred out of the region Monday, Dix said.

Provincewide, there are 510 ICU beds, in addition to about 230 surge beds.

On Tuesday, the province said 76 per cent of ICU cases and nearly 85 per cent of hospitalizations between Sept. 6 and 19 were people who were not fully vaccinated.

In the North, 53 people are hospitalized with COVID-19, surpassing previous highs from the spring when hospitalizations hovered at about 45 for those battling the virus, Dix said.

Northern Health has more than 17 per cent of B.C.’s hospitalized COVID-19 patients, despite having only six per cent of the population.

Dix cited the University Hospital of Northern British Columbia in Prince George and the Fort St. John Hospital as facilities stressed by high COVID-19 caseloads. But other parts of the region are also struggling.

Last week, three local health areas in the North — Nechako, Smithers and Fort Nelson — were leading the province’s per capita case numbers by a significant margin.

In Smithers, that led to the Bulkley Valley District Hospital temporarily diverting those in labour and C-section deliveries to Mills Memorial Hospital, two hours away in Terrace.

Darren Jakubec, a Smithers family physician and anesthetist, said the hospital’s resources were stretched over the weekend with an influx of COVID-19 patients, the majority unvaccinated.

“Some seem really surprised that they’re sick. The majority of people I saw don’t really appreciate that although some vaccinated people do get sick, vaccines are really effective at keeping young, healthy people out of intensive care units,” he said. “It’s particularly frustrating because this was completely preventable.”

“Over the weekend, the Bulkley Valley District Hospital maternity unit was impacted both by the additional pressure on the hospital, as well as some staffing challenges,” Collins said. “BVDH remained ready and able to manage any urgent or emergency maternity patients, but a small number of patients were advised to (or decided to) work with their care providers to plan for potential delivery at an alternate site.”

Over the past seven days, Dix said the northern region has averaged 41 new COVID-19 cases per 100,000 population residents, compared with 19 in Interior Health, 11 in Fraser Health, nine on Vancouver Island and seven in Vancouver Coastal Health.

That’s despite additional health measures implemented for the region on Sept. 7 that restrict indoor gatherings in the North to one additional household of five people.

Northern and Interior health authorities are also leading the province in cancelled surgeries, Dix said. More than 500 non-urgent but medically necessarily surgeries across the province were postponed between Sept. 12 and 18 due to COVID-19 pressures.

Nearly 70 per cent were in the North and Interior.

“This is obviously not where we want to be during our B.C. pandemic. It’s not where we needed to be. These pressures experienced by our hospitals right now were preventable and can still be reduced,” he said, encouraging all residents who are eligible to get vaccinated.

Dix added that hospitalizations in the North are likely to drop as vaccinations increase, but that has been slow to happen.

Currently, 65 per cent of eligible people in the North are fully vaccinated compared with nearly 80 per cent provincewide, Dix said.

“The consequences of these vaccination rates are clear. We see them in our hospitals, and they put our health-care workers and our health-care system to the test,” he said. “I want to be clear — we treat everybody with the best health care in the world. Our outcomes in ICU are the best in the world. We are going to continue to do that... but we need people to understand the critical importance of vaccination.” 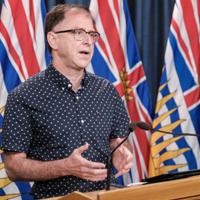 BC Promises Change as COVID-19 Surges in the North

Dix added that there are large regional differences in vaccine rates. He noted that Kitimat, in the northwest, is one of the most immunized communities in B.C. at nearly 96 per cent. However, the province’s northeast has only 50 per cent of its population fully vaccinated.

When asked about the regional differences, provincial health officer Dr. Bonnie Henry said access can be an issue in rural areas and the province is working to address those challenges.

But she added that there are a variety of reasons why some hesitate to get the vaccine, which was fully licensed by Health Canada last week after initially being approved for emergency use.

“We hear that there’s a small proportion of people who are still in denial, even when they’re in hospital in ICU, that it actually is COVID-19 that is making them sick.”

The Tyee reached out to BC Emergency Health Services for information about how ambulance services have been impacted but did not receive a response before publication time.