A giant log that became an internet sensation came from an old-growth spruce felled on northern Vancouver Island shortly before the B.C. government introduced a regulation to protect trees like it.

The tree was cut down sometime between March and August of 2020, according to an emailed statement from B.C.’s Ministry of Forests, Lands, Natural Resource Operations and Rural Development.

Western Forest Products transported the tree in August of that year, a month before B.C.’s Special Tree Protection Regulation came into effect on Sept. 11.

“Government brought in this regulation to protect exceptionally large trees of all species throughout the province,” the ministry statement said. “Today, a tree of this size might well be illegal to harvest under the regulation, and fines of up to $100,000 could be imposed if it was.”

Under the regulation, with a few exceptions, it is illegal to cut down a standing Sitka spruce with a diameter at breast height of 2.83 metres or greater.

The regulation sets size limits for harvesting 11 species of tree, in some cases with differing sizes depending on what zone they are growing in.

“Due to the date of harvest, there is no contravention of the Special Tree Protection Regulation,” the ministry said.

Jens Wieting, senior forest and climate campaigner for the Sierra Club BC, said he’s unconvinced the regulation would have actually protected the tree even if it had been in force.

For four of the species the regulation covers, including Sitka spruce, trees can still be cut down that are too big to fit on the largest trucks. In B.C., the maximum load width is 2.6 metres, he said.

“This photo is a shocking example of the size of trees that can still be logged today even after the B.C. government came out with this Special Tree Regulation,” Wieting said, adding that the regulation was written in a way that would ensure it wouldn’t significantly affect the industry.

While the government says the regulation protects some 1,500 exceptionally large trees, he said, it leaves unprotected hundreds of thousands of really big trees.

The log came to public attention this week after Nanaimo resident Lorna Beecroft photographed it Monday on a truck trailer and posted it on Facebook.

Beecroft’s post was widely shared, and many people weighed in on it on Facebook and other social media, some condemning the provincial NDP government and connecting their criticism to the ongoing dispute over old-growth logging in the Fairy Creek area near Port Renfrew on Vancouver Island.

As of Wednesday, RCMP officers had arrested at least 127 people while enforcing an injunction against blocking logging and road building in TFL 46 where Teal-Jones Group is the licence holder.

“I have never honestly in my life seen a tree that big on a truck ever,” Beecroft told The Tyee.

“We hear all about they’re wanting to log old growth, and you think, ‘That really sucks, it’s not a great idea,’ but when you actually see a tree like that on a truck, it’s beyond imagination,” she said. “You can’t ignore it. It’s so in your face.”

According to the Ministry of Forests, after it was cut down the tree was taken to a log sort in Coquitlam where it was stored in water until it was sold, which it says is common practice.

“The tree was sold and was being transported to Port Alberni for processing,” the ministry said. 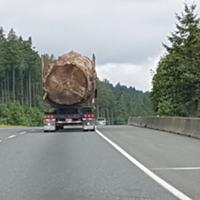 A Giant Old Growth Tree Rolling Down a BC Highway Went Viral. What’s Its Story?

A spokesperson didn’t respond to followup questions about who was doing the processing and whether the log could be exported raw.

The Tyee was able to confirm that the log passed through a log sort in Nanaimo owned by Coastland Wood Industries Ltd. and that Dumas Trucking Ltd. delivered it somewhere in Port Alberni.

So far none of the mills in Port Alberni have confirmed that they received the log.

Records for the Port Alberni Port Authority show it is a common exit point for logs shipping to foreign ports.

They include the Mount Rainier, a Hong Kong flagged vessel belonging to Pacific Basin Shipping Ltd., which was berthed from May 23 to 27 to be loaded with logs for export.

*Updated at 6 a.m. on May 28: The Sitka spruce log in Lorna Beercroft’s photo was bought by Acoustic Woods Ltd., a small, family-owned sawmill near Port Alberni, Chek News is reporting. The mill ships the acoustic guitar soundboards and other musical instrument parts it makes to customers around the world. Chek quoted Ed Dicks from Acoustic Woods saying the log is about 2.12 metres in diameter and will make about 3,000 guitar soundboards.