All eligible British Columbians will be offered a second COVID-19 vaccine dose by the end of August as B.C. accelerates its immunization program, which has already seen three million doses delivered.

The interval between doses in the age-based rollout will drop from 13 to eight weeks due to increased vaccine supply through June and the summer, provincial health officer Dr. Bonnie Henry said Thursday.

Priority for second shots in the age-based rollout will be given to those over 70, Indigenous people and those considered clinically extremely vulnerable, who were already being invited to book Thursday.

“Second doses are incredibly important for all of us, and we need to ensure that those of us who are most at risk get it as soon as they can,” said Henry.

Due to potential shortages of the Moderna vaccine, some people who received Moderna for their first dose may be offered Pfizer for their second, based on recent guidance from the National Advisory Committee on Immunization.

For those who received AstraZeneca, details on plans for the second shot will be released in the coming days and supply has already been set aside. “Hold tight,” Henry advised.

Henry and Health Minister Adrian Dix urged British Columbians who haven’t yet registered or received their first dose before April 15 to register online with the provincial vaccine system so they can be contacted for their second dose as soon as they are eligible.

Registering is “your ticket to getting your second dose faster as well,” said Henry.

The province’s four-stage reopening plan is contingent on at least 70 per cent of British Columbians getting at least one shot, as well as continued declining case numbers and hospitalizations.

As of Thursday, 65.8 per cent of adults over 18 and 62 per cent of all those eligible over 12 had received at least one dose of a vaccine.

The rolling average of new cases increased slightly as B.C. reported 378 new cases of COVID-19 on Thursday, but hospitalizations dropped with 286 people hospitalized, 88 of them in intensive care.

Seven people died of the virus in the last 24 hours, including one person in their 60s, three in their 70s and three people in their 80s or older. “We know that age is the biggest determinant for serious illness and death,” said Henry.

The next and second stage of reopening could begin as early as June 15 if 65 per cent of people over 12 are vaccinated.

But second shots, which some studies have shown to be particularly important in fighting off certain variants of concern, are not considered a benchmark in the plan.

Henry previously said the decision recognizes the importance of single doses to quell transmission risks in the community and the unique role of second doses to provide enhanced personal protection.

Second doses “ensure you have maximum protection for the maximum amount of time,” said Henry. 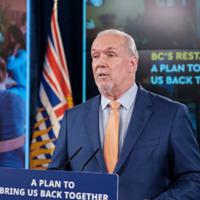 BC Officials Share ‘Light’ at the End of a Long, Dark COVID Tunnel

While the strategy for second doses effectively mirrors that for the first, that approach was criticized by disabled, chronically ill and high-risk patients and caregivers who said the definition of clinically extremely vulnerable was too narrow to protect all those who need it.

The Tyee and others reported that many people with rare conditions or who are immunocompromised weren’t on the priority list despite bearing the highest risk during the third wave and into the reopening.

“I have real misgivings about this pursuit of ‘normalcy’ if it comes at the cost of disabled people,” Corin de Freitas, a disabled and immunocompromised person, told The Tyee in March.

Henry acknowledged on Tuesday that many at higher risk may need to continue taking precautions longer than others as the province reopens.

However, vaccines and potential boosters remain essential to protecting people, “as the virus is still circulating globally,” said Henry.

“It’s the key to getting our lives back again.”