When Cody and Aja Sayers think about their dad, there’s a memory that immediately comes to mind. They’re at the PNE, and their dad is posing for a photo behind a plywood cutout of Superman.

In Alan Sayers’ Vancouver studio on Terminal Avenue near Main Street, his presence is everywhere. Drawings and photographs cover a drafting table by the window, and more are taped up on the walls: a drawing of John Lennon, a skull, a half-finished sketch of Donald Trump and Kim Jong Un. This is where Sayers’ office mate, Geoff Skinner, found his friend the morning of March 10.

“He didn’t look right,” Skinner said. “I got closer, and then I screamed his name three times from right here because I started to get scared.”

For 30 years, Sayers had a habit of having a few drinks and then smoking crack cocaine late in the evening. He’d stay up through the night, working on his art. But on March 9, the crack he smoked was contaminated with fentanyl and carfentanil, two powerful synthetic opioids. He died at age 63.

British Columbia’s unregulated drug supply has become increasingly dangerous during the COVID-19 pandemic. With land borders closed and port schedules disrupted, opioids have become more heavily contaminated with extreme concentrations of fentanyl and carfentanil as well as benzodiazepines, a class of drugs that act as a depressant and can cause dangerous blackouts when added to opioids.

Fentanyl and benzos have also been showing up more often in stimulants like cocaine and methamphetamine. It’s a dangerous mix because people who use stimulants don’t expect their drugs will include opioids, and often don’t have the same level of tolerance.

As the pandemic drags on, illicit drugs are becoming more and more contaminated, said Sam Tobias, a senior drug checking technician at the BC Centre on Substance Use. In March, 19.4 per cent of opioids tested positive for benzodiazepines, compared to 15.5 per cent in February, 15.9 per cent in January and 14.4 per cent December.

Over the Easter long weekend, a sample of what appeared to be crack was tested in Vancouver and found to be fentanyl with no cocaine in it at all, Tobias said. Tobias is urging drug users to get their drugs tested before using them.

Trey Helten, a family friend of the Sayers and the manager of an overdose prevention site in the Downtown Eastside, had begged Sayers to use his drugs at the prevention site.

“How many times have I dealt with someone who’s primarily known as a stimulant user, who uses crack only or crystal meth only, and I found them and they’ve overdosed. They’re blue and they got a crack pipe crushed in their hand,” Helten said he told Sayers.

“And I can revive them if I get to them early enough and I give them naloxone. They come back, and they’re always shocked because they thought they were getting crack.”

But Sayers, a father figure to Helten, would wave those concerns away, assuring Helten he knew where his drugs were coming from and what was in them.

Their dad had always seemed so strong to Cody and Aja, a charismatic artist who loved playing soccer and hockey. When they were young kids living in a big suburban home in Richmond, he was the stay-at-home parent who would drop them off at school and make their lunches while their mom worked in an office.

A freelance artist who worked at home, Alan spent hours with Cody and Aja teaching them to draw, playing soccer with them and jumping on a backyard trampoline.

“My good memories of my dad are his energy that he just devoted to me specifically, drawing and teaching me his craft in a really happy, non-threatening environment,” Cody said.

But things changed as Cody and Aja reached their early teens. Their parents separated and Alan moved to Vancouver. For the rest of his life, he would live and work in the Downtown Eastside, where he found a community of artists and musicians.

Cody and Aja continued to visit their dad, although sometimes it was hard to maintain a relationship because of his substance use.

“He turned into my best friend instead of a father,” Cody explained. “That was just from years of being the older brother and having to deal with the good and bad of our relationship.”

Helten was a friend of Cody’s in high school and met Alan as a teenager. Later, when Helten had dropped out of high school and was living in the Downtown Eastside, Alan was a comforting presence during a five-year period when Helten’s life was spiralling out of control. After his own father died, Alan became like a second father to Helten.

“Al was the one person that I had a connection with from when I was a kid,” Helten said. “It was hard for him to see me like that, see me strung out and doing crimes and breaking into places and begging for change and flailing around in the alleyway with a staph infection.”

Even though Alan struggled sometimes to make ends meet, he’d never hesitate to give Helten money or hand him a sketch Helten could sell on the street.

Later, when Helten stopped using drugs, Alan was so proud. “He never stopped telling me how proud he was that I did that.”

Cody and Aja want others to know how high the risk is, even for casual drug users or people like their dad who have used drugs for decades and think they know what they’re buying. 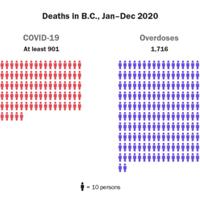 BC’s Deadliest Year for Overdoses and a ‘Shameful,’ ‘Unconscionable’ Response

They’d also like to see more action from the provincial and federal government to provide safe supply — pharmaceutical-grade drugs that aren’t contaminated — and to decriminalize drugs. While B.C. has moved to increase access to safe supply during the pandemic, the effort remains stalled, even though over five people are dying every day from poisoned drugs.

The last time Cody and Aja saw their dad was March 9, the day he died. They met in a restaurant on Commercial Drive to celebrate Aja’s birthday. Cody remembers telling his dad to pipe down, a common occurrence, because his dad was so boisterous and always got carried away with telling stories.

“He was talking so loud and showing us his art,” Cody said. “I’m sad I won’t be able to say that to him again.”