As speculation swirls about a federal election, the major parties are already offering pre-campaign promises. The New Democratic Party dangled a carrot for current and past post-secondary students last month by pledging to cancel up to $20,000 of people’s federal student loan debt.

“Young people are making student loan payments the size of mortgage payments — spending years under crushing debt not able to get ahead. And the COVID-19 pandemic only made matters worse,” said NDP Leader Jagmeet Singh in a recent press release.

In Canada more than half of students who earn a bachelor’s degree leave school in debt, with the average debt $28,000. In addition to federal student loans, some of that debt may come from loans from provincial governments or private lenders.

Last year the federal government announced it wouldn’t charge interest on student debt during the 2020/21 school year. Many provinces, including B.C., have stopped charging interest on their portion of student loans. And B.C. has a program that offers student loan forgiveness in exchange for work by graduates in certain fields.

While the NDP press release was scant on details, Global News reported the plan would start with a five-year delay on repaying loans after graduation. Then they would offer up to $20,000 in debt forgiveness for graduates with annual household earnings of $60,000 or less, phasing out altogether for households earning over $100,000.

This isn’t an original idea. While running for president, Joe Biden proposed cancelling $10,000 in student debt and said student loans should charge zero per cent interest. Now he’s asked for a legal opinion on whether he can cancel up to $50,000 in student debt without approval by Congress — a move urged by some members of his party.

But is it a good idea? Reactions are mixed.

University of British Columbia economics Prof. Giovanni Gallipoli says no. The idea sounds progressive, but in practice he argues it would hurt taxpayers, many of them working class, left with the tab.

“If the government goes in and pays the $20,000, it will relieve this burden from people who chose to go to college, who disproportionately come from privileged backgrounds. From families with parents who have at least one college degree between them, if not both,” he said. (Biden, in fact, has said he’s against forgiving loans of students who attended wealthy elite schools.)

Public post-secondary education is already a government-subsidized education, Gallipoli added. B.C. post-secondary institutions, for example, receive just over 43 per cent of operational funding from government transfers, down from 90 per cent in the 1970s.

If students aren’t paying off their government debt, the cost will come out of general taxpayer revenue, he said, the majority of which comes from taxes paid by the working class.

“Effectively the street sweepers and the cleaners and the people on low incomes are actually paying their taxes to subsidize the acquisition of a very valuable investment that in many cases still has a very high return,” Gallipoli said.

“A purely frictionless world, without credit friction, would allocate the people with the highest ability to the jobs with the highest return. What do you think would happen to inequality in that scenario? Inequality would go up.”

For students unable to pay off their debts due to conditions beyond their control, like graduating during a global pandemic or financial crisis, Gallipoli suggests deferring or cancelling interest on the loans. Or pin the start of loan repayments to graduates earning above a certain income threshold.

While Gallipoli sees student loans as a necessary and complimentary system, he says the best government investment for improving access to post-secondary education would be through non-refundable merit and needs-based student grants.

“Merit-based grants are extremely effective in facilitating the allocation of students to courses, universities and effectively to outcomes that are socially beneficial,” he said, pointing to his own study that found a $1,000 annual increase in all student grants in the U.S. leads to almost a one per cent increase in gross domestic product long-term.

The UBC economist believes removing loan repayment would also remove the incentive for students to self-select into degrees that would help them make the income required to pay off their debts.

But Tanysha Klassen, chair of the BC Federation of Students, pushes back on that point, saying students are going into debt to pay for these lucrative degrees, sometimes to escape intergenerational poverty. Yet even with a job in their field they are not necessarily making enough money to pay what they owe.

“Regardless of what incentives or potential threats to their credit are being held over people who have student debt if they don’t have the money to pay it off, there really is no incentive,” she said.

Government budgets are about choices, Klassen added: they could choose to put money into students instead of another program, and benefit from graduates putting their money into the economy instead of paying off their debt.

“Debt is something that only holds people back and is not going to incentivize people to try and get a better job to get out of debt. They’re going to deal with being in debt until such time that they’re able to pay it off — or they won’t pay it off.”

But it’s not enough to make post-secondary accessible and affordable. And that’s where they agree with Gallipoli: more student grants are needed.

“It’s great to see increased discussion around student debt in Canada, and I think this will definitely be a policy that goes a long way to support students,” said Alliance chair Bryn de Chastelain of cancelling student debts. 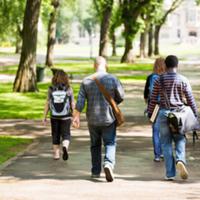 “But it’s not necessarily going to eliminate the problem entirely, and I think targeted investments towards upfront, non-repayable grants are still the best option in terms of increasing the accessibility and affordability of post-secondary education.”

Currently in B.C. you have to take out a student loan in order to be considered for a non-refundable grant, which Klassen said needs to change.

Other changes she suggests to make post-secondary more accessible and affordable include lowering tuition fees and raising government operational funding, which must happen in tandem to work.

“Institutions are relying so heavily on tuition fees that if they were told to lower those tuition fees, institutions would be in a real tough place to try and provide the same services and infrastructure,” Klassen said.