Even though British Columbia is intervening in a Supreme Court of Canada case in an attempt to limit the power of municipal governments, Attorney General David Eby said Monday it would be better to negotiate the relationship between cities and provincial governments.

“The relationship between provinces and municipalities is an ongoing dialogue between the province and our cities, and it’s an issue that should be decided in our discussions with the cities rather than through BC Supreme Court or Supreme Court of Canada,” Eby told The Tyee. “It’s an important issue, and we wait for the court’s decision on that.”

In February, B.C. filed a 20-page factum as one of 18 intervenors in a dispute between the Ontario government and the City of Toronto. The case dates back to 2018 when, just two months ahead of the Toronto election, Doug Ford’s Ontario government passed Bill 5, the Better Local Government Act, to reduce the number of wards in the city from 47 to 25.

The city challenged the law in court, and Ontario’s Superior Court of Justice ruled against the Ford government, ordering the election to go ahead with 47 wards. But the Court of Appeal for Ontario reversed the ruling in a 3-2 split decision.

The election was held with the reduced number of wards, but the court battle over whether the changes violated voters’ and candidates’ rights to freedom of expression continues and is headed to the Supreme Court of Canada with a hearing scheduled for March 16.

B.C. is the only provincial or territorial government to intervene in the case.

In its submission to the court, it argues that municipal governments and institutions like school boards “are creatures of provincial governments with no constitutional status” and that finding in Toronto’s favour would encroach on provinces’ power.

Martha Jackman, a professor of constitutional law at the University of Ottawa, said B.C.’s argument relies on an “extremely regressive” reading of the Constitution. “I’m disappointed to see a social democratic government proposing the same very regressive, conservative and narrow reading of charter rights,” she said. 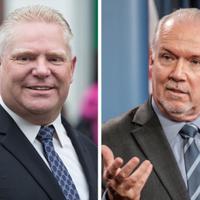 Margot Young, a professor in the Allard School of Law at the University of British Columbia, said the B.C. government is acting to advance its own interests even though it seems to contradict the NDP’s political principles.

“It’s a good illustration of how governments talk out of both sides of their face often,” she said. “They say some things politically, then they turn up and argue in court against fuller, expansive, generous interpretations of charter rights.”

Asked about those criticisms, Eby said he’ll have more to say after the case is finished.

“The matter’s still in front of the court, and once we have a decision I’ll be happy to go into more detail,” he said. “We look forward to the court’s decision and we think it’s an important issue, the distribution of powers between the province’s and cities, which is why we intervened.”