A Downtown Eastside advocate says it’s unacceptable that Vancouver Coastal Health failed to inform the public about a dysentery outbreak that has sickened 24 people and sent 16 of those patients to hospital.

Karen Ward, a Downtown Eastside resident and advocate, says she first learned about the outbreak of shigellosis from a doctor who began messaging her on Twitter in the early morning hours Friday.

The doctor was concerned: at that point, 11 patients with shigellosis had been hospitalized, all from the Downtown Eastside. The shigella bacteria causes diarrhea, fever and stomach cramps and some people can become severely ill and need treatment with antibiotics to recover. Shigella is a major cause of dysentery.

The doctor who messaged Ward was worried that information about the outbreak wasn’t getting out.

“He said, ‘Can we talk tomorrow?’ And I said, ‘Of course.’ He got ahold of me the next day and said he was scared," Ward said.* What the doctor was worried about, according to Ward, was that information about the outbreak had not yet been made public.

Ward has a contract to work with the City of Vancouver on drug policy and often advocates for Downtown Eastside issues.

Ward said she took her concerns to the health authority, then early on Saturday morning, to the City of Vancouver.

“VCH wouldn’t even answer me, so I went to the city: I emailed the mayor, council and senior managers.”

On Saturday, Vancouver Coastal Health sent a notice about the outbreak to organizations that operate housing and shelters in the Downtown Eastside. Doctors were told on Friday, according to the health authority. The notice outlined causes, symptoms and measures organizations and individuals could take to prevent the spread.

But Ward said VCH has still not communicated anything to the wider public, meaning some people may not know to seek medical help if they have symptoms or take extra precautions to protect themselves.

Shigella is a bacteria present in feces that can spread when people don’t have access to proper hand washing options, safe food preparation or clean bathrooms.

“People here are not in the best of health, but if they catch these symptoms early and get tested, get diagnosed and they get prescribed a round of antibiotics, it could clear up in three or four days,” Ward said.

“If they don’t get to it quickly, it will spread. They will get sicker. It could turn into a very serious blood infection.”

Carmen Lansdowne, the executive director for First United, confirmed her organization received a notice about the outbreak from Vancouver Coastal Health on Saturday. She said the facilities First United operates, including a shelter and several residential buildings, have not been affected by the outbreak.

Lansdowne said she sent the notice to shelter staff and asked them to remind residents to wash their hands thoroughly.

While VCH initially reported “over 10” people had been hospitalized, those numbers are now at 24 total cases and 16 hospitalizations, according to a staff update Lansdowne shared with The Tyee.

In response to questions from The Tyee, Vancouver Coastal Health communications staff said in an email that the health authority had been getting reports of isolated cases of shigellosis in the Downtown Eastside for the past few weeks.

Ward says the first case was diagnosed at St. Paul’s Hospital on Jan. 31.

In its statement, VCH said it became aware of a cluster of shigellosis among people hospitalized at St. Paul’s Hospital, and “immediately began investigating the cases in order to determine the source of transmission, to identify further cases, and to provide information to residents and housing providers in the community about how to limit the spread of the bacteria.”

Local doctors were alerted on Friday, and that alert was posted to Vancouver Coastal Health’s website on Saturday, according to the health authority. The alert says doctors should consider that shigellosis may be the cause of gastroenteritis if patients are “homeless, under-housed, or part of the social network of the Downtown Eastside.”

Ward said many Downtown Eastside residents have very low incomes and are in poor health, and the health authority needs to do a better job of giving residents health information directly.

“This is not a palliative care ward, this neighbourhood, and it’s not your laboratory either,” Ward said.

People who live in the Downtown Eastside have been hit hard by the COVID-19 pandemic and the ripple effect of pandemic restrictions. Drug poisoning deaths and homelessness have both increased in the neighbourhood, and many residents struggle to access bathrooms and places to wash their hands with soap. 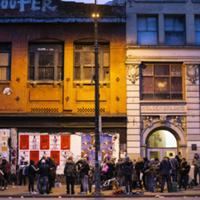 Those challenges are not limited to people who are homeless: many residents live in single-room occupancy hotels with shared bathrooms.

The Tyee previously reported on complaints that one SRO building, the Gastown Hotel, was not being cleaned properly and soap was not available in washrooms. A tenant who lives in the Hazelwood Hotel, where at least 20 residents have tested positive for COVID-19, also said cleanliness could be improved in her building.

Those include building staff smoking with clients or each other; residents and peer workers cleaning with limited training and personal protective equipment; staff double-masking but putting less effective cloth masks on the bottom; inadequate PPE and unsafe PPE removal; staff eating and travelling together; and poor ventilation.