The City of Vancouver will use part of a $51.5-million federal rapid housing fund to buy a hotel just off Victoria Drive on Kingsway to convert into 65 housing units for people who are homeless or at risk of homelessness.

Mayor Kennedy Stewart said the city has successfully purchased the Days Inn at 2075 Kingsway after some “bumps” with attempting to purchase other hotels, but having the sellers raise prices. Stewart said he could not reveal the purchase price of the Days Inn.

“We can’t disclose the amount because we’re still negotiating with other property owners,” Stewart said. “Eventually I think the approximate numbers will come out, but while we’re negotiating with this particular funding, we won’t be disclosing the amount.”

The hotel will need some renovations, the mayor said, and won’t be ready for new residents to move in until November.

While a press release put out by staff for Canada Mortgage and Housing Corp. mentioned the announcement would have something to do with Strathcona Park, where a large tent city has been located for nine months, Stewart stressed the newly bought hotel won’t just be for those residents.

“My focus has always been to get as much federal money as I can and then approach it generally,” he said.

The news comes as homelessness has risen in Vancouver and other Canadian cities alongside the COVID-19 pandemic. On Saturday, Vancouver Coastal Health warned organizations working in the Downtown Eastside about an outbreak of shigellosis, a gastrointestinal illness that has hospitalized 10 people over the past two weeks. It is caused by unsanitary conditions.

The $51.5 million for Vancouver is part of a $1-billion rapid initiative administered by the Canada Mortgage and Housing Corp. The money for Vancouver was previously announced in October, when Stewart said he hoped some new housing units would be available before Christmas 2020.

While the city is continuing to eye hotel and motel properties, one city-owned property is already out of consideration for use as rapid housing. The city has decided not to move ahead with converting another city-owned property, the Jericho Beach Hostel, for use as housing for people who are homeless.

“After touring the space and consulting with BC Housing and potential operators, the decision has been made to not activate this space as a shelter,” city staff told The Tyee.

“The City and its partners believe that due to the location of the building, the Jericho Hostel would not be a suitable space due to lack of access to transit and services, and that the age and design of the building mean that it would be inaccessible for people with mobility issues.”

A decision has not yet been made on another property the city already owns, the 2400 Motel at 2400 Kingsway.

Jamie Maclaren, a Strathcona resident who has been calling on the city to rapidly house the people living in the Strathcona Park tent city, said the Days Inn announcement is welcome, but 65 units is not going to be enough to put a dent in the homelessness crisis in the city.

Maclaren said he was disappointed the city decided against using the Jericho Beach Hostel, located on Vancouver’s higher-income westside, given that it would be quicker and there would be a lower cost to the city to use a building it already owns. 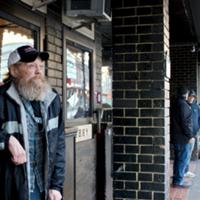 Once Homeless, Residents of a Granville Street Hostel Are Now Thriving

“They gave the excuse there are no support services around there and that transportation is an issue for people,” Maclaren said.

David Eby, the provincial minister responsible for housing, has promised that residents of the Strathcona Park tent city will be moved to shelters or housing, and the camp will be dismantled by April.

The province and the City of Vancouver recently announced two buildings will be converted into shelters as part of the effort to house people: the empty Army and Navy building at 27 W. Hastings St. and an industrial building at 875 Terminal Ave.

In the early months of the pandemic, the province moved to buy or lease hotels and motels in Vancouver and Victoria and attempted to remove large tent cities that had formed in those two cities.