Trans, non-binary and gender divergent immigrants and refugees living in British Columbia now have a support group to call their very own.

Beyond Borders and Binaries, a peer-support group run by MOSAIC settlement and employment services agency and the Vancouver Association for Survivors of Torture, began meeting online in September after MOSAIC heard from the trans community that they needed a support group just for them.

Initially what trans people — a label that includes but is not limited to non-binary, gender non-conforming, gender queer, trans men and trans women — said they needed from MOSAIC when coming to Canada was information about the process of getting here in the first place.

“So, for example, if they’re flying and they need to carry their hormones, people were wondering how they could do that: if they could bring it on through their check-in luggage, or if they could carry it on their carry on,” said Kiana Reyes, a MOSAIC program facilitator.

But the only peer support available for the trans newcomer community at the time was through I Belong, MOSAIC’s peer-support and counselling group for lesbian, gay, bisexual, trans, queer, intersex, asexual, two-spirit and more community, created in 2014.

In 2020, Trans Care BC and MOSAIC held focus groups with trans immigrants, refugees and newcomers to identify successes of the resource hub, as well as gaps that needed to be filled.

The group heard “that there was a need for the actual community to connect, to bring it on a community level, and to have peers support one another through different processes within the settlement process in Canada,” said Reyes.

The feedback led to the creation of Beyond Borders and Binaries, a peer-facilitated online monthly meeting where members of the newcomer trans community gather to take advantage of community support, advice from people with lived experience of being trans in Canada and abroad, and have a social outlet in an isolating pandemic.

Beyond Borders and Binaries meets on Zoom every third Monday of the month from 6:30 to 8:30 p.m. with peer facilitator Norma Lize and two counsellors from the torture survivors’ group always in attendance.

Lize, a former refugee from the Middle East who came to Canada in 2018, says the group meets the needs of trans people in a way that broader queer spaces cannot.

“The need to feel more comfortable in a space where people share similar experiences to you, if not the same one,” she said. “We felt that we were represented in the I Belong sessions. But we wanted something to be focusing more on trans folk.”

Beyond Borders and Binaries’ meetings so far have attracted a dozen or so trans people, mostly living in the Lower Mainland or in Victoria. Some are newly arrived, while others may have been in the country for years, says Lize.

Each meeting has a different discussion topic, from surgeries to employment, housing, hormones, chosen families and stereotypes. They play music, talk about their lives and end every meeting with a reflection period led by participants themselves.

“They will wrap up the session with reflections, with one word, with how do they feel? What did they gain from this evening and looking forward to next time?” said Lize.

While trans rights have been enshrined in both B.C. and federal human rights laws, as well as the Criminal Code of Canada, trans people in Canada are still at higher risk of experiencing violence than cis-gender people.

On top of that, many immigrants and refugees fled persecution in their home countries to come to Canada, including from their former home’s police and government. 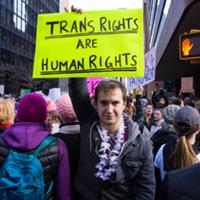 BC Is Becoming a Trans Rights Leader. Don’t Take It for Granted

That’s why, in addition to the usual confidentiality forms signed by those accessing MOSIAC’s online services, potential participants go through a discussion and vetting process with Reyes before they can join a meeting.

“We state it right at the beginning of the group that confidentiality is important,” Reyes said. “As well as giving the option for folks to write in or type in the chat without having to share their video or their voice if they don’t feel comfortable doing that.”

That said, Beyond Borders and Binaries offers trans people a chance to show their whole selves and be accepted for who they are, Reyes added.

“And it’s really just a space for folks to create community.”