We all know the sensation. You’re deep into a book and suddenly realize that you have jumped three pages ahead, yet you can’t remember a single thing you read on those pages. Your mind has gone off-track, ambled into some other realm. You may feel embarrassed for zoning out like this, but what has happened is perfectly normal, healthy even. Daydreaming, an activity often disparaged in popular culture as the product of a lazy mind, is now believed by cognitive psychologists to actually be an indicator of an active and clear-thinking brain.

Kalina Christoff is solidly in that camp. A pioneer in the scientific study of mind-wandering, the UBC psychologist has been prominent in the campaign to prove that daydreaming is not simply an odd quirk of the mind, but rather a beneficial brain function associated with elevated levels of creativity, higher intelligence and more efficient thought processing.

Christoff describes mind-wandering as an important cognitive state where we unconsciously turn our attention from immediate tasks to sort through important issues in our lives. She says that what transpires during mind-wandering is similar to what occurs during sleep when the brain organizes our experiences and memories into meaningful connections and helps us arrive at new conclusions.

Christoff traces her interest in daydreaming back to her childhood in Bulgaria where she spent summers wandering through fields and orchards, letting her mind roam at will. After earning a PhD at Stanford University and doing postdoctoral work at the University of Cambridge, Christoff came to UBC and founded the Cognitive Neuroscience of Thought Laboratory, where she and her colleagues investigate several types of mental phenomena, including mind-wandering, dreaming and meditation, using a combination of neuroimaging techniques and behavioural testing.

The lab’s work has played a key role in advancing scientific understanding of mind-wandering, an area of inquiry that has only emerged from the shadows within the last 15 years. Before then, says Christoff, “The prevailing feeling was that the mind had to be producing all the time. Science treated the human mind as a resource to be exploited.”

Nothing to worry about

Even influential thinkers such as Sigmund Freud were disdainful of daydreaming. Freud went so far as to suggest that daydreaming and fantasy were early signs of mental illness. This scientific viewpoint was reflected in popular culture, where daydreaming was branded as a type of moral failure as reflected in such proverbs as “An idle mind is the devil’s workshop.”

The bias persists today. “For many people, there is a guilt associated with mind-wandering. If you engage in it there is a feeling that you are wasting time, that you are not being a good citizen,” says Christoff.

Attitudes toward daydreaming began to change in scientific circles after the invention of sophisticated machines that could track metabolic activity in the brain. One method, known as positron emission tomography or PET, uses the injection of radioactive substances in the bloodstream. Another technique, known as functional magnetic resonance imaging or fMRI, uses a powerful magnet to detect hemoglobin, which is carried by the blood. Both techniques deliver detailed structural images of the brain with the movement of blood superimposed on top of these images.

The ability to peer inside the human cranium and observe the fizz and buzz of neurons has revolutionized brain research. Neuroscientists now know that our brains house more than a dozen operating networks that handle various cognitive tasks. These tasks are not performed by individual brain regions working in isolation, but rather by networks consisting of several regions said to be “functionally connected.”

One such circuit is the executive network. “It is used when you want to apply your mind to a specific task, such as focusing on a boring lecture. I equate it with force of will,” explains Christoff.

Another of these circuits, which links several different sections of the brain, is known as the default mode network. It is activated when the mind enters a relaxed state and drops its focus on the outside world. During these times we might be daydreaming, recalling memories, envisioning the future, thinking about the intentions of others, and so on — all things that we often do when we find ourselves just “thinking” without any explicit goal of thinking in mind. It was once assumed that when the brain entered this mode, brain activity ceased. Instead, scientists have learned that the opposite is true — brain activity increases.

Christoff was able to demonstrate the link between mind-wandering and the default network in a lab experiment. Study participants were shown numbers zero to nine and had to press a button whenever any number except three appeared. When they inevitably lost their focus during this tedious task, Christoff’s researchers could spot the exact moment when their attention tapered off. Just before an error, activity in the default network of the brain soared, and surprisingly the executive network was also ignited.

It also was apparent that the less subjects were aware that their minds were wandering, the more both networks were activated. When fully engaged, this activity is symphonic in nature. “Signals fluctuate together going up and down in concert,” says Christoff. The researchers concluded that people struggling to solve complicated problems might be better off switching to a simpler task and letting their mind wander in random patterns.

The discovery that the executive network is also active when we daydream was a revelation to Christoff and her team. “Previously, scientists have thought they operated on an either-or basis — when one was activated, the other was thought to be dormant,” she says.

It has also become evident to neuroscientists that mind-wandering or spontaneous thought is something the brain engages in constantly and automatically and that we do this far more than we might imagine — from one-third to one-half of our waking hours. In fact, the only activity in which people’s minds do not drift into mind-wandering is lovemaking.

For our brain to devote this much time and energy to an activity it’s reasonable to assume there is some type of payoff. “Mind-wandering has huge benefits in terms of arriving at new ideas,” says Christoff. “It’s by virtue of free movement that we generate new ideas and that’s the basis of creativity.”

A key to creativity

The notion that daydreaming can be a source of creative inspiration has long been recognized by artists, and by prominent scientists as well. Albert Einstein was a documented daydreamer. In fact, he was expelled from school because he rebelled against prescriptive learning, choosing instead to pursue his own ideas. Einstein’s Theory of Relativity was supposedly sparked by a daydream he had about running alongside a sunbeam to the edge of the universe.

When our minds are allowed to move freely, we are less likely to dismiss seemingly unrelated or bizarre ideas. “The power of the wandering mind,” notes Christoff, “is precisely the fact that it censors nothing. It can make connections you would otherwise never make.”

The ability of daydreaming to boost creativity has been demonstrated in several experiments. In a 2012 study conducted at the University of California Santa Barbara, researchers gave participants a creativity test in which they were asked to imagine novel uses for an everyday item, such as a paperclip or a newspaper.

As the authors of the study wrote: “The findings reported here provide arguably the most direct evidence to date that conditions that favor mind-wandering also enhance creativity.” In fact, they add, mind-wandering may “serve as a foundation for creative inspiration.” 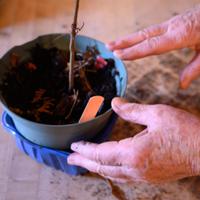 In addition to boosting creativity, Christoff says that the self-reflective nature of spontaneous thought helps us to better grasp the narrative of our lives by connecting the past, present and future. “This allows us to map our own space of experiences and get to know our internal environment. We are better able to understand ourselves and the causal nature of the world because we can see the bigger picture.”

Christoff’s investigations have led her and others to conclude that a keener understanding of the mysteries of default network may have practical medical applications, including possible prevention and treatment strategies for diseases of the mind such as obsessive-compulsive disorder, anxiety and depression. In each of these ailments the default mode network has been found to be overactive, locked on a repeating cycle of negative thoughts, a condition that Christoff calls “daydreaming gone awry.”

As she explains: “Sometimes the mind moves freely from one idea to another, but at other times it keeps coming back to the same idea, drawn by some worry or emotion. Understanding what makes thought flow freely and what makes it constrained is crucial because it can help us understand how thoughts move in the minds of those diagnosed with mental illness.”