Except in kindergarten to Grade 12 schools, which aren’t considered public spaces, Henry said when she announced the mask rules.

“[Schools have] individual COVID safety plans that meet certain criteria — you’re with the same people every day, you don’t have people walking in and out,” Henry said. “Masks are an important part of some areas of schools, in particular when you’re in common areas when passing by people in other cohorts.”

But not all parents and teachers believe the rules make sense.

Students in middle and secondary schools are required to wear masks on the school bus and in common areas like hallways, bathrooms and lunchrooms. But they don’t have to wear them in the classroom.

Elementary school students don’t have to wear masks at all. Public health experts believe younger students will touch their face more frequently if they wear masks, increasing the chance of transmission.

Earlier in November, Henry estimated there had been less than a dozen cases of COVID-19 transmission in schools. Only one official outbreak — with proven in-school transmission — had been declared, at a Kelowna school. A few clusters, where several people have COVID-19 but it’s not clear it was caught at school, had occurred.

But in mid-November, three schools in the Lower Mainland were temporarily closed due to outbreaks, and one Surrey music teacher landed in intensive care.

And on Nov. 24, Vancouver police were called to McBride Elementary School after a man unknown to the school entered a classroom and refused to leave, casting doubt on Henry’s assertion that strangers don’t just walk into schools.

Teachers, as well as some doctors, say the province’s rules on masks in schools need to change.

Schools are organized into cohorts of students: a maximum of 60 students in elementary and middle schools and 120 secondary school students who attend classes and eat lunch together.

Cohorts are one of the preventative measures in schools, along with additional hand-washing stations, some online classes for secondary students, more cleaning and upgrading school ventilation systems.

Teri Mooring, president of the BC Teachers’ Federation, said limiting students to cohorts isn’t enough. The union is calling for rules similar to Ontario’s, which require all students age 10 and up to wear masks everywhere in school, including classrooms.

“We are consistently told that cohorts serve two purposes. One is contact tracing. We totally understand that,” she said. “The second that has been a consistent claim, I would say, is that they also serve a protective measure by reducing the number of contacts that students have.”

When the new school semester last month began and secondary cohorts changed to group students together by their new subjects, no new precautions were put in place to ensure the change didn’t result in in-school transmissions, Mooring said.

The teachers’ union asked Henry and the Education Ministry for a two-week mask mandate for secondary students. The day before the new semester began, the teachers received their answer: No.

“The decision was that nothing needs to be done, which doesn’t make any sense to us if it is true that cohorts serve to reduce the number of contacts that students have in school,” Mooring said.

Not only does the union want masks in schools and class sizes limited to 15 students to allow physical distancing, it wants the public release of provincial data on the number of school exposures, clusters and outbreaks, and how many students and teachers have come down with COVID-19.

“It needs to be shared at one of the briefings, and I’m really struggling to understand why that hasn’t been the case,” Mooring said. Provincial data should not involve privacy concerns, she said.

Earlier in the pandemic, children were considered low risk for transmission, infection or serious consequences.

But as the pandemic wears on, the science around kids and COVID-19 is changing.

Children “are not the driver, i.e. the superspreader, but I think to say that there’s no transmission is also erroneous,” said Dr. Amy Tan, a palliative care and family physician in Victoria who co-founded Masks4Canada to encourage mask-wearing during the pandemic.

“If it’s somewhere in the middle where they do spread, but they’re not responsible for excessive spreading, I still think that mitigating the risks is important.”

Tan points to a recent study out of the University of Alberta that showed one-third of children who tested positive for COVID-19 in the province were asymptomatic, meaning there would be no way to know they had COVID-19 had they not been tested.

“Even if they’re not excessive spreaders, they are spreading to some degree. And I think, why not put in all measures? If every added layer is going to help with safety, why not add this?” said Tan, who would like to see masks mandated for students in kindergarten to Grade 12.

Tan says schools should be seen as important as hospitals during a pandemic, and every possible prevention measure should be in place to prevent them from closing.

“There are going to be kids in school who can’t [wear masks] for developmental reasons or behaviour reasons, absolutely,” she added. “And we should absolutely be kind, and be working out and expecting exemptions.”

The Tyee asked for an interview with Health Minister Adrian Dix and newly appointed Education Minister Jennifer Whiteside for this story. Neither were made available.

Tyee health reporter Moira Wyton asked Henry during Wednesday’s COVID-19 briefing why masks were still not mandated for all students in all school settings, despite the fact that cohorts are often breached.

Henry reiterated that masks are part of school safety protocols and have been since schools reopened in September — just not in classrooms.

“We encourage of course that young people learn how to wear a mask appropriately, that it’s safe for them to do it, and we encourage parents, teachers and everybody to wear a mask in those situations where they can’t maintain distance with people outside their learning groups and cohorts,” she said.

“The mask mandate that we put in place very recently talks about those public indoor places. And yes, children are required to wear masks in public indoor spaces as well as in their schools.”

Unless they’re in a classroom.

Elaine, a Grade 3 teacher in the Lower Mainland, considers herself fairly lucky. Her class is in a newer portable, which means her classroom windows open to let in fresh air.

Her school’s ventilation system was one of the ones upgraded to prevent COVID-19. And her class is small enough that the $200 air purifier she bought with her own money makes a difference.

But Elaine still eats lunch in her car every day to ensure the only time she spends without her mask on is isolated from her students and colleagues. (We agreed not to use Elaine’s real name to avoid reprisals.) 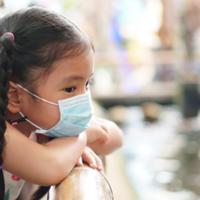 What’s It Like Being a Kid During COVID-19? Not Good

Elaine’s students are seven and eight, younger than those the teachers’ union would like to see wearing a mask. Only four of her 21 students join her in putting on a mask every day. But she’d like all of them to wear one.

“I have fibromyalgia, and I also share my home with my mom who is going to be 79 and is a breast cancer survivor,” said Elaine. “That’s another reason why I am never without my mask.”

So does Tan, who thinks of her three-year-old niece living in Boston where masks are mandated everywhere outside of your own home.

“She wears a mask in the park outside, and she wears it to daycare, as well,” Tan said.

“She takes it off for a snack, she puts it back on. She’s a pandemic baby. She’s the one who will say, ‘Why are they not wearing masks to help not spread germs?’ So part of it is the behaviour and normalizing it for young children.”