Health Minister Adrian Dix added to his long list of COVID-19 catchphrases on Thursday, this time turning his attention to house parties.

“Don’t throw, don’t go, say no,” quipped the minister about in-home gatherings, which officials say have been driving transmission of COVID-19 in British Columbia.

An order from provincial health officer Dr. Bonnie Henry last Monday has limited private gatherings to no more than one household plus their “safe six” guests, but partying captured on video over Halloween weekend continued to alarm officials.

Some on social media loved the catchiness of the minister’s Thursday rhyme. “Thanks Dr. Seuss! But seriously if everyone could just stay home. Period. Unless it is absolutely necessary,” read one reply to the minister on Twitter.

But others found the lyric similar to “just say no” messaging around drugs and alcohol that has proven ineffective in influencing the behaviour of youth.

Experts in health communication say this kind of messaging doesn’t work. Instead, a harm reduction approach to pandemic partying would more likely get through to youth and save lives.

“Mainly because of the messaging not resonating with them, youth are ignoring it all together,” said Lauren Holmes, founder of Ontario-based online resource Party Responsibly. “They’re being shamed, so a lot of it is just going right over their heads.”

“It’s very hard to drop one thing without an alternative,” said Alice Fleerackers, a PhD student and researcher in health communication at Simon Fraser University. “You can’t just tell us not to do something, without giving us some suggestions of what we can do.”

Young adults under 39 make up about half of COVID-19 cases in B.C. despite accounting for only around 30 per cent of the population, according to the province’s most recent modelling presented on Oct. 5.

Fleerackers noted young adults are more likely to be frontline and service workers, to take transit and to live with roommates or in situations that make limiting contacts very difficult, which could account for their disproportionate share of cases.

“Obviously they’re still a core part of our society and of how this virus can spread,” said Fleerackers.

But she and Holmes say young adults aren’t being treated as equal partners in fighting COVID-19, instead being blamed for transmission even when messaging doesn’t speak to their specific circumstances.

“They’re being demonized, but if messaging gave them guidelines in a positive way on how they’re able to follow restrictions and see their friends, it would make a huge difference,” said Holmes. “Because they haven’t been doing that.”

That information should include tips for gathering that reduce the chance of transmission, such as not sharing drinks, vaping devices and cigarettes or joints, gathering outdoors, and keeping the group small.

“I think youth would be willing to do that if government changed their tune and spoke directly to them,” said Holmes. “Saying it’s a personal responsibility isn’t working.”

Holmes knows this first-hand. Party Responsibly started in the spring, when her classes at Western University went online and the whole campus seemed to shut down.

But as the 22-year-old looked at her Snapchat and Instagram feeds, she saw people were still gathering and partying even as numbers climbed.

“And then I realized it wasn’t just the people on my Snapchat, it was people around the country.”

The recent graduate has seen great engagement with the site’s resources to reduce the harm of partying right now but says it’s still hard to get the message out there. 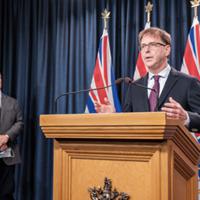 BC Sees a Spike in COVID-19 Cases, but No New Rules Yet

Government could engage liquor and cannabis distributors, as well as community peer leaders on university campuses to encourage safer partying in the same way the “drink responsibly” initiative took off with the help of liquor stores, Holmes said.

Fleerackers added that speaking to youth and young adults about who they go to for guidance in their communities is also an important step to getting the message out there.

“I think the government needs to get over their phobia that they’ll be perceived as encouraging partying,” said Holmes.

It’s already happening, she said, so why not make sure it’s as safe as possible?

“‘Party responsibly’ as a rallying cry is no different than a ‘drink responsibly’ or ‘safer sex’ campaign,” said Holmes.

“Youth want to see their friends and they can do it in a responsible way.”