Hannah Lando heard a lot about politics when she was growing up in Vancouver. Her parents watched programs like The Daily Show and Last Week Tonight. She spent summers attending a social justice Jewish camp on Gabriola Island.

But it was in 2016 that she started taking a deeper interest in politics, when Donald Trump began dominating the screens.

“I started getting my own social media accounts that year,” said Lando, who turned 14 that year. “There was this chart that ranked all the different Democratic and Republican candidates about their policy. It was super easy to read, a perfect resource for teens on the internet. I started paying attention way more.”

She began discussing politics with her parents more often at the kitchen table, and with classmates at her high school. She took part in last year’s climate strikes in Vancouver in solidarity with youth around the world. And in the 2019 federal election, older friends who turned 18 before her even asked for advice on who to vote for.

This year, the B.C. snap election will be Lando’s first chance to vote. She turned 18 in August, just in time to cast her ballot. Aside from climate change, housing affordability and the overdose crisis are top of mind for her.

Ask her why she’s voting, and she’ll say it’s not because of her parents or because being political is cool.

Her answer? “It is necessary.”

Lando is a member of generation Z, which is generally defined as those born between 1995 and the early 2010s. So far, they’ve shown greater willingness to acknowledge, understand and confront societal problems than millennials. However, older generations still lump them in with millennials as being politically apathetic.

The average turnout for a Canadian federal election is 71 per cent. In 2001, the first federal election that millennials voted in, only 28 per cent of the 18 to 24 age group cast ballots. Reasons that young Canadians have given for not voting include not feeling heard and viewing it as a choice rather than a duty.

But this is changing. Turnout among the cohort has improved over the years, hitting a rate of 57 per cent in 2015.

Young Canadians played a key role in replacing Stephen Harper’s Conservatives with Justin Trudeau’s Liberals. And B.C. saw a similar jump in voter turnout for the 18 to 24 age group in that same period.

Gen Zs are only beginning to reach voting age, but they’ve already been making their voice heard in other ways. Aside from the climate strikes, young British Columbians have participated in Black Lives Matter protests and rallies in solidarity with Wet’suwet’en hereditary leaders.

Participation in these movements, according to a young Green candidate, is spurred by her generation’s anxiety and urgency.

Kate O’Connor, who turned 18 on Oct. 9, is running in the riding of Saanich South. She worked for Sonia Furstenau’s Green leadership campaign in September and decided to run after the snap election was announced, while still believing B.C. Premier John Horgan’s decision to hold one is irresponsible. In 2017, the Greens came third in Saanich South with 25 per cent of the vote, losing the seat to New Democrat Lana Popham.

Like Lando, O’Connor was also shocked by Trump’s victory. “That’s when I started looking at politics more closely,” she said.

She saw how national politics can have a global effect. Realizing elected leaders had the power to “change things from the inside,” for better or for worse, she took the chance to put her name forward for a Green candidacy.

“There’s a cycle of older people criticizing and blaming young people for not being involved in politics. But when they do and step forward, they’re told that they’re too young and not serious. I want to be a part of breaking that cycle,” O’Connor said.*

“I want to show young people that it’s important for our voices to be heard in government. Youth provide a different perspective, and we need diverse perspectives to make legislation.”

There are a handful of young candidates running this election, and a few other teens like O’Connor among them.

Twenty-six-year-old NDP candidate Tesicca Truong in Vancouver-Langara has spoken on the importance of electing young MLAs who personally face challenges like housing affordability, climate change and disruptions in the job market, with the rise in contract work and less union support. It’s important for a legislature that “understands our changing reality,” she said.

Young candidates credit the example of the NDP’s Bowinn Ma. She was the youngest MLA in the most recent government, elected at 31. At the end of her term, she was 35.

If Justin Trudeau was so concerned about having a cabinet with gender parity, why not consider other factors like age to better represent citizens? The young MLA hopefuls note that 40 per cent of British Columbians are under 35 and could do with someone who relates to them in the legislature.

Aside from lived experience of the issues, the ability to communicate a youthful and less stuffy vision of politics is also important.

Younger MLAs might be in the minority, but their online and creative campaigning “lend well to a COVID world,” said political scientist Prest.

Ma, for example, was known for short video breakdowns of key issues and biking around on what she called her BowinnMabile to keep constituents informed.

“Someone who’s not as invested in B.C. politics can find out what’s happening and have a sense of who she is and what she’s about,” said Prest.

As much as this generation hopes to change the times, it’s also the times that change a generation.

“Early adulthood experiences shape the worldview of a generational cohort as it goes through the political system,” said Prest.

Events like wars and sweeping government initiatives play a role. For many in gen Z, keen awareness of the climate crisis has solidified their environmental values. Trump’s win showed the fragility of a democratic nation.

And the pandemic this year could encourage gen Z to embrace a more social democratic government in the post-COVID years to come, said Prest.

As for how gen Z might affect the outcome of this B.C. election, it’s hard to say.

The Sustainabiliteens, the group of young people who helped organize last year’s climate rallies in Vancouver, are planning to endorse candidates in an attempt to translate the mass in-person participation they’ve seen into votes. However, while the climate agenda that’s top of mind for young candidates might be well received in urban areas, it’s less important to voters in some suburbs and smaller towns.

“In some ways, [B.C. has] the regional divisions of the country in miniature,” said Prest. “A portion of the province is resource-dominated, resource-extractive... those areas tend to be more skeptical of putting climate action ahead.”

And while the smoke in southwestern B.C. might’ve been a tangible climate alarm, COVID-19 and its effects are dominating as an election issue.

Nonetheless, many vocal young people believe that simply showing up on the political scene is important.

Harrison Johnston, the 21-year-old Green candidate in North Vancouver-Seymour, recommends that people who are too young to vote ask the adults in their lives to consider their future at the ballot box. 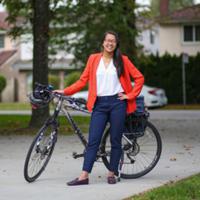 “I’m highlighting my experience as a young person when I’m talking to parents and grandparents,” he said. “This is the experience their children are having too, both this threat of climate catastrophe coming and being unable to afford to live in a community that they love.”

Johnston, who helped organize last year’s climate strikes, is currently studying to be a teacher and said that on a teacher’s salary he likely won’t be able to live on the North Shore where he grew up.

The Greens previously ran a young candidate in the same riding in 2017, 19-year-old Joshua Johnson. He came in third place, losing the seat to the BC Liberal Jane Thornthwaite.

But Johnston doesn’t view that as a loss: his young predecessor proved he could make an impact by racking up 18 per cent of the vote.

* Story updated on Oct. 13, 2020 at 8:30 a.m. An earlier version of this story incorrectly attributed this quote to Hannah Lando.