As Donald Trump gives Americans reason to fear that his loss in the November election will trigger mayhem propagated by racist thugs, a key catalyst for such concerns is a Canadian: Gavin McInnes.

The son of Scottish parents who immigrated to Canada when he was a child, McInnes attended Carleton University, helped start Vice magazine, parted company as his political views veered way right, and went on to found the hate-spewing Proud Boys in 2016.

You might have seen them on your television screen just last weekend when they caused Oregon’s governor to declare a state of emergency because, yet again, a rag-tag phalanx rolled into Portland to rally against Black Lives Matter protesters.

McInnes left the Proud Boys in 2018 after several members were charged with assault. Watch the video below, though, and you’ll hear many times he made no bones about the intended role of the shock troops he spawned.

“We will kill you. That’s the Proud Boys in a nutshell.”

”We will assassinate you.”

“Don’t listen to what he has to say. Choke him.”

“Can you call for violence generally? Cause I am.”

“We need more violence from the Trump people. Trump supporters.”

“Get a fucking gun.”

During Tuesday night’s debate, hapless moderator Chris Wallace of Fox News lobbed Trump a chance to quell worries that his election strategy is to foment civil war. “Are you willing to condemn white supremacists and militia groups and say they need to stand down and not to add to the violence in these cities as we saw in Kenosha and in Portland?” Wallace asked Trump.

In response, Trump gave a shout-out to McInnes’s creation. “Proud Boys, stand back and stand by. But I’ll tell you what, somebody has to do something about antifa and the left.”

On social media, Proud Boys members erupted with joy at such affirmation. In no time flat they were selling T-shirts proclaiming “The Proud Boys, Stand Back and Stand By.”

The Proud Boys are ecstatic tonight about getting mentioned in the debate tonight.

"Trump basically said to go fuck them up! this makes me so happy," writes one prominent Proud Boy. pic.twitter.com/hYA7yQVAOn

The Southern Poverty Law Centre has labelled the Proud Boys a "general hate" organization. McInnes is suing, claiming the designation is defamatory and damaged his career.

The FBI classifies the Proud Boys an “extremist group” that has “ties with white nationalism.” The news site Vox explains, “the Proud Boys are a strange amalgamation of a men’s rights organization, a fight club and what some may see as a hate group — one that loves Donald Trump, hates Muslims (and Jews and trans people), but permits non-white membership.”

McInnes moved Vice and himself to New York City in 2001, but he never really left Canada. He found a home for his toxic slurs on Ezra Levant’s Canadian platform, the Rebel. Even when McInnes was hired away in 2017 by a bigger-spending U.S. outlet, Levant declared him “a friend” who “was key to our growth.” Last year, Levant proudly announced that McInnes was back on board the Rebel.

One thing McInnes and Levant share is a tendency to shrug away perfectly fair conclusions about what they say and do. After the Unite the Right nightmare in Charlottesville, N.C., in which a white supremacist deliberately plowed into peaceful protesters with his car and killed a woman, some Rebel contributors resigned, prompting Levant to issue a staff memo claiming to be shocked that the alt-right movement had taken such a turn, led by the likes of neo-Nazi “Richard Spencer, and other white nationalists.”

Just earlier, Levant had crowed of the big money the Rebel was pulling in on YouTube. As the National Post reported: “Its growth was fuelled in part by broadcasting some of the far-right personalities and themes prominent at Charlottesville — including Spencer (whom McInnes interviewed) and others who were at the rally.”

McInnes, for his part, has laughably denied he is white supremacist or even far-right in his views — though as far back as 2002 he was spouting, “I love being white and I think it's something to be very proud of. I don't want our culture diluted. We need to close the borders now and let everyone assimilate to a western, white, English-speaking way of life.” 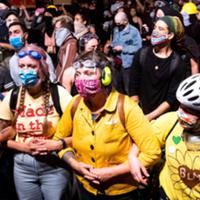 Letter from Portland: Mom Is Pissed at Trump’s Secret Police

Confused? Well, bear in mind that McInnes self-identifies as a “provocateur.” Which is just how Levant’s legal team characterized him in a failed libel defence. Fighting that suit, brought by Saskatchwan lawyer Khurrum Awan, Levant’s lawyers explained their client could not be convicted of libel because, as an "outspoken provocateur and troublemaker" rather than, say, a journalist, no one really should take him seriously.

Similarly, after McInnes posted on the Rebel a segment titled “10 Things I Hate about the Jews” he passed off the whole sickening rehash of anti-Semitic tropes as comedy. “He’s not to everyone’s taste,” Levant said of McInnes in a note to Canadian Jewish News, but he should be seen as merely a “provocative commentator and humourist.”

The video further up this article capturing quote after quote by Canada’s noxious export says otherwise.

It’s all fun and games until some defeated president dog whistles the brown shirts and the United States is embroiled in bloody civil war.