It’s a clear September day as Mary Nicholas and her family arrange white plastic chairs in a well-spaced circle.

The view from the roadside pullout on the southern flanks of Hudson Bay Mountain spans the Bulkley Valley, where trees are beginning to take on hues of gold and yellow. The family spent the previous day cutting back weeds and picking up garbage at this spot 10 minutes from Smithers, B.C.

Today, they busy themselves steadying signs that read “Justice for Jessica” and “End Violence Against Indigenous Women and Girls.” They prop up cardboard displaying the smiling face of a young woman as they prepare for an intimate gathering of remembering.

Two years ago, this is where Nicholas and her husband discovered the body of her 18-year-old niece, Jessica Patrick. They’re still asking questions about what happened and when someone will be held accountable.

Patrick, who also sometimes used the last name Balczer, was 18 when she went missing on Aug. 31, 2018. A member of the Lake Babine Nation, she grew up in Fort Babine, 100 kilometres northeast of Smithers. After her parents split, she moved to Smithers and spent time in foster care.

Patrick often crashed with friends and family, Nicholas says — her sister, an auntie or her boyfriend. So when Patrick dropped off her 18-month-old daughter with the child’s paternal grandmother and said she was going to a party at a local motel, no one immediately thought to sound the alarm when she didn’t return in the morning.

It was the last time her family saw her alive.

After several days, Patrick’s sister began asking if anyone had seen her. The grandmother noted it was unusual for her to not check in on her daughter. Everyone began to worry. No one knew where to turn.

“People were asking around but not doing a search party or anything. They did call the RCMP, but I think the RCMP didn’t take it seriously,” Nicholas says. Days after contacting police, the family realized Patrick hadn’t been added to a missing person’s list.

“So, we did everything ourselves,” Nicholas says. “I gathered everybody and said, ‘OK, we’ve got to start looking.’ Basically, we’re doing the investigation ourselves.”

Two years later, Nicholas is stoic as she looks out over the valley and remembers the two weeks Patrick was missing. She took time off work and, with friends and family, walked the streets, knocked on doors and talked to people who knew her niece.

They chased false leads an hour away and delved into a darker side of this idyllic northern B.C. town as they retraced her final steps.

Everyone was tired when Nicholas put out a call for searchers on the morning of Sept. 15. Only her husband and nephew responded. Nicholas was beginning to sense that something horrible had happened.

“We were talking that morning and I said, ‘What if somebody accidentally hurt her? Where would they get rid of her?’” Nicholas remembers. The small search party decided to head up Hudson Bay Mountain to the roadside lookout, where they could have a wide view of the valley. They took binoculars.

Nicholas’s husband was gazing out across the valley, looking for clues about where Patrick might be. But Nicholas couldn’t take her eyes off the ground. A narrow path through the weeds led from where she was standing straight down a slope. Probably an animal track, her husband insisted. Nicholas was persistent and demanded he check it. With difficulty, he began descending the steep bank.

Near a cluster of conifer trees, about 15 metres down, he found Patrick.

“I don’t remember anything after that,” Nicholas says, falling into silence and wiping away tears. “It still hurts.”

Two years after that day, the family still wonders why they had to search for Jessica and what the police were doing.

And why there have been few answers since then. The information they gathered during their search was passed along to investigators. No one has been charged.

“We didn’t know what we were going to find, if she was going to be deceased or alive, and a family member shouldn’t have to go through that,” Nicholas’s daughter, Jacquie Bowes, says. “When we were looking for Jessica, we only had my close friends and associates and some family members that did every step. And that’s how we ended up finding Jessica. On our own.”

Smithers is the midpoint on the infamous Highway of Tears, a stretch of road named for the disproportionate number of women who have gone missing or been murdered along the route, most of them Indigenous. From Smithers, it stretches nearly 400 kilometres in each direction, to Prince George in the east to Prince Rupert in the west.

Bowes grew up in Houston, an hour east of Smithers, and can easily list several women she’s known who have gone missing along the Highway of Tears, their cases still unresolved: Frances Brown, Laureen Fabian, Ramona Wilson. Her cousin, Jessica Patrick.

These are just a few of dozens. Officially, RCMP say there are 18 unsolved murders and disappearances along the Highway of Tears. Unofficial tallies put that number at more than 50.

After Patrick’s body was released from the BC Coroners Service in Prince George, her family drove her back to Smithers. Supporters lined the highway, not just in the communities they drove through, but those beyond — in Hazelton, Terrace, Prince Rupert and even along the Nisga’a Highway to the north.

People along the entire Highway of Tears came out to honour her.

In the years that have followed, people have not forgotten, Nicholas says, but the pandemic has made it harder to raise awareness. That’s why today’s gathering will be an intimate one.

The family was supposed to meet with RCMP investigators on the same day, but that meeting was cancelled when the investigators had nothing new to report, she says.

Bowes says she’s not giving up.

“I told them, I refuse to have a cold case,” she says. “They are setting precedent saying that these murderers can get away with murder. Now they’re overwhelmed with cases, and they can’t even keep up or they don’t have the manpower to keep up.”

Although she says police were initially investigating her cousin’s death as a homicide, she fears the delays may be an indication that the case has been downgraded.

In an email to The Tyee earlier this week, RCMP Cpl. Madonna Saunderson said there has been “a large investigation that has involved multiple investigators” and the file remains under active investigation.

When asked about the nature of the investigation and whether police have any suspects, she said she had no further information. “More information may be released as it becomes available,” she wrote.

Bowes says she last heard from the RCMP’s Major Crimes Unit in March, six months ago.

“They contacted me and said ‘We have not forgotten about you. Jessica is still first on our list. We’re trying our best to put everything together,’” she says. “It’s been like a broken record throughout the last two years, saying that Jessica’s first on their list and that they’re almost done, and still nothing. It feels like they’re giving us the runaround, and nothing is being done.”

For three years, Canada’s National Inquiry into Murdered and Missing Indigenous Women and Girls heard from families across the nation who had lost loved ones, including at a stop in Smithers in September 2017. Its final report, released in June 2019, called Canada’s treatment of Indigenous women “deliberate race, identity and gender-based genocide.”

More than a year after the report’s release, many of its 231 recommendations — including establishing Indigenous civilian oversight of police investigations in cases involving Indigenous people — have yet to be implemented.

In May, the federal government blamed the pandemic for delaying the release of its much-anticipated action plan.

“It is urgent, very urgent, that we have a civilian body,” Audette told the Canadian Press, describing stories about crime victims not being supported and families not being taken seriously when a loved one disappears. 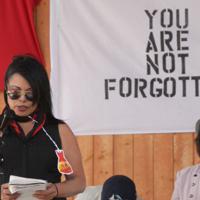 For the family preparing to grieve their lost loved one at the Hudson Bay Mountain lookout, any bit of information would have been a gift today.

“I was really upset,” Nicholas says about the cancelled meeting with investigators. “I was hoping to hear something positive. To me, it sounds like a runaround.”

It took a long time, but Nicholas can finally sleep again. Yet, last night, after a day spent cleaning up the lookout, she awoke from a nightmare, the sound of hers and her husband’s screams the day they found her niece ringing in her ears. Sitting alone, outside, she felt a darkness surround her.

She’s determined to bring light to what happened to Patrick.