Sarah Lindsay moved to her apartment in a three-storey house in Vancouver’s Mount Pleasant neighbourhood 17 years ago. Now she’s facing eviction and the threat of homelessness in the middle of a pandemic.

The building owner, developer PortLiving, has given her notice that she’ll have to leave the apartment in two months because the building is being converted to condos.

Lindsay’s not alone. A wave of change is coming to the neighbourhood as the Broadway Subway Project attracts developers and investors.

She received her first notice four months ago, but a pandemic eviction ban halted the process. The province eased the ban on July 2, and now she is struggling to find a new home.

“On Aug. 1, they sent me the eviction notice saying that I'd have to move out by Sept. 30, but they previously told me that I wouldn't be evicted during this pandemic. But, the pandemic is still going on. I’m very scared,” she said.

Lindsay, 38, is immunocompromised. Because of her autoimmune disease, she is very sensitive to noise, which limits rental options. She’s been considering relocating to Vancouver Island, but travelling adds to her health risks.

“Because of the eviction, I’m really stressed,” she said. “I’ve been feeling a lot of shortness of breath. I’m not sleeping well. I’ve lost 10 pounds in one week, and I’m vomiting up my food due to the stress. The stress dreams are the worst — like I wake up in a cold sweat and I will be crying and I can’t do anything about it.”

Lindsay’s space is full of valuable possessions as she used to run an antique shop, which also closed due to an eviction and COVID-19. Now she is facing the challenges of packing an entire house and moving out.

Her apartment has been affordable because rent increases have been limited by provincial regulations. Any move will bring a major rent increase.

She is not alone in the struggle. Her next-door neighbours, Nelia and Wilfredo Guevara, are also facing eviction. The 67-year-olds have been in their apartment for 24 years and say they are now on the verge of homelessness.

Vince Tao from the Vancouver Tenants Union, a grassroots organization of renters fighting for political change, has been working with the couple.

Tao said Vancouver’s Tenant Relocation and Protection Policy fails to protect renters. It provides compensation for long-term renters, and moving expenses and help finding a new place. But it’s not enough, he said.

“The Guevaras are being offered just a package of around $6,000 for their 24 years of living there, and when PortLiving says they've been helping them with relocation, that just means their property manager has been emailing them Craigslist listings every two weeks of apartments which are double their rent,” he said.

Tao said PortLiving has offered the couple six months’ rent in compensation. But the most recent version of the city’s Tenant Relocation and Protection Policy, which was updated in June to increase payments, says renters in an apartment for 20 to 30 years are entitled to 12 months’ rent, he said. That’s up from six months under the previous policy.

Nelia Guevara is living with a disability, Tao noted. In 1986 she had a traumatic brain injury and has lived with depression and PTSD.

Even with the new policy, the amount isn’t “an adequate compensation considering Nelia’s vulnerability and the magnitude of harm this eviction will inflict upon her,” Tao said.

Guevara worked as a nurse and a teacher in Vancouver and always thought she would die in her apartment in the neighbourhood where she raised her two kids.

“She says that the developer has not only purchased the building, but also purchased her life,” Tao said. “She is living on a pension and if she is kicked out of her apartment, she will have to pay double rent and essentially be at poverty levels of living, at threat of ending up on the streets.”

Tao said he sought help from the city, which sent representatives from homelessness services. It’s almost like they have accepted that they will be homeless, he said.

Nearby commercial tenants have also been affected.

Andrew Lee, who has been running a recycling bottle depot for the past six years, said he has been given two months to leave.

Lee has found a new place down the block, but he is paying the rent for both spaces. He has to apply for his business licence again and get a building permit — which he says could take four months — and complete renovations on the new space.

“I also need to get upgrades, like to meet building code requirements, which will be like another $60,000-70,000. I'm already hooked up for the 10-year lease of the other place, and if everything doesn’t go well, I might be bankrupt,” Lee said.

He acknowledged the developer had made its plans clear. “When they took over a year and half ago from our old landlord, they told us you will have to leave in a few months,” he said. “We should’ve understood their intentions then.”

Lee said he has been calling the developer to seek a delay, but received no support. Lindsay said prospective landlords have said they can’t get a response from PortLiving when they request a reference, hurting her chances to find a new place.

Tao sees this to be a part of a larger problem.

“There's tons of development happening,” he said. “I'm two blocks away from Main and Broadway. I'm going to get this kind of eviction very soon too.” 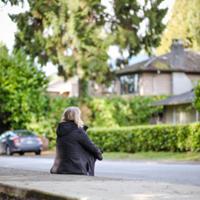 He has been seeing the essence of the neighbourhood disappear over the past few years.

“Community relationships are disappearing as these tenants are being forced to leave. We’re losing the dense social network of relationships between people like Nelia and Sarah and the shops, restaurants and grocery stores that used to be in this neighbourhood before getting ripped up.”

Tao is working with Lindsay and the Guevaras in advocating for their rights and assisting them in finding suitable accommodation.

But Lindsay is worried sick. She has already begun selling off her collected antiques. If nothing works out she is hoping to move all of her remaining stuff into a 20-by-20-foot storage unit.

“I can take my 19-year-old cat and live in my van... I’ve just accepted that I’ll have to live through the heart of the second wave of the pandemic in my van. It is terrifying but what else can I do now?”

The Tyee reached out to PortLiving by email and telephone but did not receive a response.