“Burnaby RCMP officers rocking the distribution line this morning at our Winston Street location,” the food bank said on Twitter. “We love it when our community comes together!”

But not everyone felt as upbeat about the idea of armed police handing out food to society’s most vulnerable.

“I’m absolutely stunned,” said Paul Taylor, who’s worked in the food justice world in Vancouver and is executive director at Food Share in Toronto. The presence of police officers at a food bank could be traumatizing for users, many of whom may be people of colour.

“It completely ignores the realities of Black and Indigenous people in this country who are terrified of the police, who see people who look like them get beaten and murdered at the hands of the RCMP,” he said.

Food bank use has surged across Canada during COVID-19, though it’s not clear who is accessing services at the moment as there isn’t any data available. Past research has shown that people of colour disproportionately require access to food bank services, and a Toronto study by Food Share and Proof found that Black households were 3.6 times more likely to be food insecure than white households.

Taylor, who is Black, said he feels terrified when he walks down the street and sees a police car.

There is already stigma associated with using food banks, he added, and the sight of a police officer handing out food would make some users fearful.

“This is exactly what happens when we don’t have people who are most affected by the issues that are working on addressing them,” Taylor said. “They think that they have good intentions but have no systemic analysis that recognizes anti-Black racism, anti-Indigeneity, that’s embedded in this issue and in our food system.”

Graham Riches, emeritus professor and former director of the School of Social Work at University of British Columbia, agreed that police presence at food banks is problematic.

“They are in their uniform, which is likely to intimidate Black Canadians and Indigenous populations,” he said. “If you’re a police officer and you wish to volunteer at a food bank, you should be out of your uniform and be doing it because you’re just a citizen who wants to do something. But when you institutionalize it and wear your uniform, that’s problematic.”

Riches wants food banks eliminated and says the police presence is another example of the need to move from a food charity model to a food justice model.

Food insecurity is a political problem, he said, and millions of Canadians should not be relying on charity for the food they need to survive. The fact that income assistance leaves people unable to afford food is a serious issue, he added.

Sarah Kim of the Vancouver Neighbourhood Food Networks, a network of groups that work on food security across the city, says the sight of a police officer at a food bank can be retraumatizing to vulnerable groups.

She said food banks should be more sensitive to the needs of their clientele, adding that she’s known new immigrants, especially those who’ve faced police violence in their home countries, who have felt terror at the sight of any police officer.

“Indigenous people and Black people have histories of police brutality with RCMP. They’re going to feel harmed and traumatized,” said Kim. “Most likely, either they’re going to leave or never come back again. And if they don’t come back, where do they go then to access food?”

Kim said food banks should be wary of the messages sent when they collaborate with police or corporations and make their clients the priority.

Audrey Tung, whose master’s thesis at the University of British Columbia focused on food insecurity in Richmond, said food insecurity disproportionately affects people of colour because of institutional discrimination. She, too, was critical of the RCMP presence at food banks.

“For the RCMP, it is a way of evading accountability for violence through superficial initiatives that maintain systems of oppression,” she said. “These are ways of cloaking unjust practices under a PR banner.”

“We want communities to be able to come and speak to us and have a relationship with us, so that when they need help, they feel comfortable speaking to a police officer. We just want to be approachable,” he said.

Kalanj said that’s his personal goal too. He wants community members to see RCMP officers as a part of their communities.

Feezah Jaffer, executive director of the Surrey Food Bank Society, agrees that the point is to build trust in communities.

“The reason why the RCMP or any kind of police force does these things is to establish the trust,” she said. “So, if they come to an organization like us, that actually gives them a face to be there in their uniform and help out in handing out food.”

Jaffer said she wants people accessing food to feel closer to RCMP officers and safer in dealing with them.

“The picture of a police person in uniform serving you food has the connotation of breaking the barrier. It tells them that they’re not here to harm you. They’re here to help you. It fosters trust.” 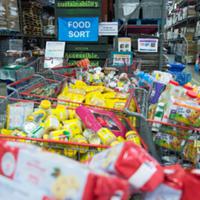 How Food Banks Prop up a Broken System

Jaffer says there has been a long history of police brutality, but now is the time to rebuild relationships, foster a sense of rapport in the community and tackle food insecurity together.

Dan Huang-Taylor, executive director at Food Banks BC, an organization supporting the food bank networks across the province, said every food bank needs to decide what kinds of partnerships are appropriate.

“At the local level, how food banks are partnering with other community agencies lies in their full discretion,” he said. “We leave it to them who they partner with, but we always hope that we wouldn’t see any detrimental impact on any individual’s ability or comfort level in accessing a food bank.”

He said there’s always room to improve, and if RCMP are involved it’s up to food banks to ensure that clients are able to access services with safety and dignity.

The Tyee reached out to the Greater Vancouver Food Bank for a comment but did not hear back by deadline.