Migrants and international students are breathing a sigh of relief after the province extended temporary provincial health coverage at the eleventh hour.

B.C. expanded its Medical Services Plan to include some migrants and temporary foreign workers at the pandemic’s height, but the changes were set to expire today.

The decision came just hours after two dozen advocates and allies gathered outside his Vancouver constituency office, chanting “Health care for all!” over the roar of passing trucks along Joyce Street.

The initial MSP changes included coverage for temporary foreign workers on short-term visas as well as people who have “implied status” while they apply for or renew their work permits.

The normal three-month wait period for new B.C. residents to become eligible for MSP was also waived earlier this year, but it will be reinstated Saturday, Dix said.

But health advocates say the government must go further than this partial expansion amid a pandemic that has hit migrant and temporary foreign workers hard and brought immigration services to a near halt.

“This decision is not enough,” said Omar Chu, a member of the Sanctuary Health collective. “We’re demanding health care for all. Nobody should have to fear going to the hospital or going to see a doctor.”

Chu says the number of people without benefits, which the government estimates at 30,000, will only grow with the immigration backlog the pandemic has caused.

He wants to see eligibility for temporary foreign workers on contracts less than six months and those awaiting work permit renewal made permanent.

The waiting period — between two and three months — for medicare benefits should be abolished, he said.

While Kaoruko Sasaki is relieved she can again extend her coverage, the threat her insurance would end today was a nightmare.

The Japanese national recently finished a graduate program at Royal Roads University and is in the process of applying for her post-graduate work permit, meaning she has implied status until her application is processed.

But when she learned her coverage was set to end today, she immediately stopped working at her position at a non-profit in Burnaby for fear she wouldn’t be covered if she became ill. “There would be no one to cover my housing or medical bills.”

“I’m legally allowed to stay here and work full time in this country, and they’re excluding us, like we’re nothing,” she said from the rally outside Dix’s office. “Even if they had informed us on July 1, I could have made other plans.” 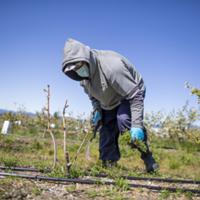 “It’s like all of the sudden, when we finish our program, they just throw us under the bus like they don't care.”

Sasaki and her partner Shane Fraser spent the last week calling more than 20 offices and elected officials asking about the change, which was not communicated to them in any way.

Fraser said at the rally he was hung up on by a government staffer when he told them what he needed help with.

Sasaki says the ordeal shows a lack of caring for international students and migrant workers caught in the immigration slog.

She hopes the extension will be made permanent, at least until the backlog of immigration is cleared and the brunt of the pandemic has passed.

“Just care about us,” Sasaki urged.