Zero Avenue in Abbotsford, B.C. is not your typical romantic destination.

Then again, nothing feels typical when we’re four months into a global pandemic that has shut down international borders.

Photographer David Tesinsky was in Abbotsford visiting a friend when he spotted umbrellas and camping chairs set up in mirrored pairs along the U.S.-Canada boundary. Though there’s no physical barrier, hulking metal markers declare one slice of roadside grass is British Columbia, and everything south of that is Washington state.

This, Tesinsky discovered, was the necessarily distanced setting of at least two couples on cross-border dates.

Though they only live a 45-minute drive away from each other, Julia (American) and her date Lynt (Canadian) have yet to visit each other’s houses. In an email to Tesinsky, Julia said they began chatting online in early 2020 and met for the first time at Surrey’s Peace Arch Park in May. “It has been such a special park for us,” Julia said.

The new couple spent two or three afternoons a week together until the park closed over COVID-related safety concerns. When the Peace Arch closed, they relocated to what Julia calls the “border ditch” in Abbotsford.

Tesinsky said the couples he met took extra precautions to avoid scrutiny from police and border guards. They each brought their own snacks, beverages and places to sit. Tesinsky said he saw very few people passing by, except for the occasional police cruiser. When nobody is around, at least one of the couples admitted they have held hands, and even kissed.

The novel coronavirus has changed dating in significant ways on both sides of the border. Instead of loud bars or movie nights, first dates have mostly been happening in parks and on video conference platforms. 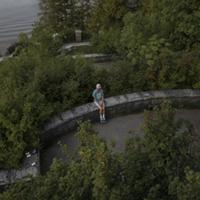 ‘Inside Stanley Park, It Doesn’t Feel like a Pandemic Anymore’

In B.C., where new COVID-19 cases have been hovering in the single digit range for more than a month, restaurants and businesses are starting to open their doors. But for couples separated by an international border, the return to normalcy is still a long way off.

“We’re anxiously awaiting for the border to open so that we can freely drive back and forth to each other’s houses,” Julia told Tesinsky. “It’s so hard to realize how close we are, but that we can’t cross the border line between our countries — even though it’s an invisible line.”

Julia told Tesinsky that the recent reopening of the Peace Arch has been a huge relief. “We are very thankful to have found and met each other and are so happy we can meet at the park and still spend time together in this place for now.”