Canada’s largest outbreak of COVID-19 swept through two meat-packing plants in southern Alberta two weeks after the provincial government ignored union requests to temporarily close both of the plants.

And it mirrored a series of recent, well-documented hot-zone eruptions in meat plants in the United States.

More than 600 immigrant workers and community members have been infected while the disease has killed at least three people at Cargill's High River plant and the JBS food plant in Brooks, Alta.

“The real issue here is a moral issue,” charged Thomas Hesse, president of the United Food and Commercial Workers Local 401, which represents workers at the plants. “How do we as a society want to bring food to our tables?”

Rachel Notley, the former premier of Alberta, has called for a full public inquiry.

"It is unconscionable that we now have a situation where hundreds of people have contracted a deadly virus," said Notley, who leads the NDP Official Opposition. “What kind of concerns put the lives of workers so low?” she asked on CBC Radio yesterday.

Alberta’s growing outbreaks follow in the wake of deadly events in the U.S. where meat-packing plants have become COVID-19 incubators.

The U.S. recorded its largest single cluster of cases at a pork-processing facility in Sioux Falls, South Dakota in early April. By the time the Chinese-owned facility closed for two weeks there were nearly 900 cases.

In the U.S., rates of coronavirus infection are 75 per cent higher in rural counties housing large beef, pork and poultry-processing plants, a USA Today investigation found. But leading up to meat-plant outbreaks there, as in Alberta, government authorities largely ignored warnings from workers, unions and immigrant groups.

“Initially our concern was long-term care facilities,” said Gary Anthone, Nebraska’s chief medical officer, last week. “If there’s one thing that might keep me up at night, it’s the meat-processing plants and the manufacturing plants.”

The Alberta outbreaks should have caught no one by surprise, University of Ottawa public health expert Amir Attaran told The Tyee.

“It definitely should have been predicted by the health and safety inspectors that these would be hot spots,” said Attaran. He noted that “Alberta was doing inspections by video,” raising questions whether there was “an effort to prevent the inspectors doing their jobs.”

In mid-March the union representing Alberta workers at meat plants called upon Cargill and JBS Food to prepare to shut down in case of an outbreak.

Cargill’s food plant, which is located in High River, and JBS Food in Brooks, are both high-volume kill factories. They control 85 per cent of the nation’s beef slaughtering capacity. A smaller Cargill plant in Guelph, Ontario does the rest.

Cargill slaughters up to 4,500 beef cows a day and JBS 4,200 daily. Nearly all beef sold in Canada’s grocery stores comes from one of these three foreign-owned plants.

In response to the union’s questions about preparations for shutdowns, Cargill replied it was going to keep “our facilities open and operating because now, more than ever, families across Canada and around the world are relying on us to deliver safe, affordable protein.”

JBS said, “We are allowing employees age 70 or older, employees who are pregnant, and employees who [are] currently being treated for cancer, to go on a voluntary leave of absence and receive short-term disability benefits during that period.”

And then the first cases emerged at Cargill in early April.

Workers at the plant say they were unable to avoid infection risks at the Cargill plant located just north of High River, a community of 14,000 people.

At the Cargill plants, which disassemble beef cows into steaks and roasts, employees, many of whom are immigrant labourers from 50 different countries, work shoulder to shoulder. While Cargill implemented some new measures to limit virus transmission, physical distancing is a near impossibility in a modern meat-packing plant.

Among such operations in the U.S., there have been scores of COVID-19 outbreaks. One at a massive JBS plant in Greeley, Colo. infected hundreds of workers and killed at least four in early April. The plant, which slaughtered 5,400 cattle a day and employed 6,000 people, eventually closed for two weeks.

Meanwhile the contagion in Alberta continued to grow. After more cases emerged at Cargill in early April, Alberta Health Services inspected the plant on April 7.

Thomas Hesse asked for a written report but was told there was none, and that the Calgary regional arm of health services relied on “verbal reports” from its staff that the plant was safe.

But by Easter the virus had continued to spread and as many as 38 cases had appeared among workers.

On April 12, Easter Sunday, the UFCW’s Hesse formally requested that the province shut down the Cargill and JBS plants for two weeks.

“That week my mind was squirming like a toad because I had seen all these places close in the United States and the government had said one in six Albertans were going to carry the virus,” Hesse told The Tyee. “My grandmother told me an ounce of prevention is worth a pound of cure, but with this pandemic there is no cure so we need more protection.”

His letter argued that temporary shutdown would save lives and would not affect the flow of beef significantly. The letter also referenced outbreaks at meat-packing plants in the U.S.: “The numbers that are emerging from comparable plants in North America have now reached a tipping point so as to obviously necessitate new preventative action in your plants. There are now reports of 30 North American UFCW member deaths. Employees are scared. Your employees are scared. It is time to act. It is time to protect life.”

At the same time, 267 members of the Filipino community in High River sent a letter to High River Mayor Craig Snodgrass requesting his help to convince Cargill to close its plant for two weeks. “We are mentally bothered and anxious,” they wrote, “even paranoid about the fact that even mildest symptoms spreading day by day thinking would somehow lead to the conclusion that they might be already positive carriers of the virus.”

The signers added that the company had ignored their pleas. “They don’t even care to provide masks for their workers, they told them to provide their own if they wanted to. It is very sad to know that the health of the employees are definitely not their concern. They are only after PROFIT!”

In response to these entreaties, Dreeshen said plants like Cargill have to remain open. He told CTV News that he was confident that changes the companies had made, including Plexiglas barriers, temperature checks and protective equipment would protect workers.

“These plants need to be operational in order for our food-supply system to operate,” pronounced Dreeshen on April 14.

Cargill accused Hesse of being “inflammatory” and scaring workers away from the plant. (Read the letter here.)

After Easter, UFCW Local 401 filed a formal complaint with Alberta Occupational Health and Safety about conditions at Cargill’s High River plant and concerns about the virus. OHS then performed a virtual inspection involving visuals provided by a cell phone on April 16.

No workers were interviewed, and the inspector never stepped into the plant.

“We have a staff of 70 at the union, and they didn’t ask any of us to participate,” said Hesse. He called an inspection of the massive facility via cell phone “ridiculous.”

On April 15, Alberta Health Services set up a dedicated testing facility in High River and it soon recorded hundreds of positive cases. The AHS attributed some of the cases to carpooling at the plant and the fact that a high number of Cargill workers shared living space.

Authorities, Cargill and government ministers again tried to reassure employees that their workplace was safe during a telephone town meeting on April 18.

That was followed the next day by a union telephone conference where 2,000 members were asked if they were afraid of going into work because of the outbreak: 85 per cent said yes. The union informed its members of their basic right to refuse dangerous work.

“They are only closing because people weren’t coming into work,” explained union spokesperson Michael Hughes. “They refuse to call it a shutdown. They call it idling.”

The head of the U.S. conglomerate that owns Cargill’s Alberta plant announced the closure in a statement. “Considering the community-wide impacts of the virus, we encourage all employees to get tested for the COVID-19 virus as now advised by Alberta Health Services as soon as possible,” said Jon Nash, president of Cargill Protein.

The JBS facility, owned by a Brazilian conglomerate, is still operating one shift of 1,000 workers despite several hospitalizations and one death. “Increased absenteeism” forced the change, said the company, despite increased wages of $4 an hour.

When Cargill finally closed, Alberta Premier Jason Kenney downplayed the event at a daily press conference, saying that Alberta had 200 meat processing facilities and that only one per cent were affected. He did not mention that the two plants combined, Cargill and JBS plants, slaughtered most of the beef in the country.

Hesse remains critical of the province’s response as rates of infection and deaths rise. Neither the government nor Cargill “adequately protected workers, and now our members are getting sick and dying. If our members’ work is essential, they shouldn’t be treated like they are expendable.”

Hesse says the province needs to make changes to protect workers at meat plants as well as grocery stores. “We are calling for an independent, worker-centred review of health and safety in food processing facilities and grocery stores, to create a clear, effective and well-enforced regulatory regime for Alberta’s food sector.” 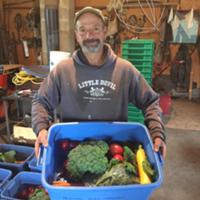 Yesterday, April 24, the government of Alberta announced that Occupational Health and Safety would investigate conditions at both plants by sending inspectors inside their walls.

But Hesse says that it may be too late to repair trust. “Our members have lost faith in the ability of OHS to protect workers,” he said.

The UFCW Local 401 is the largest private sector union in Western Canada and represents 32,000 Alberta workers mainly in the food processing and retail sector.

To some ranchers and farmers, Alberta’s outbreaks illustrate the fragility of an industrial food system focused on bigness, efficiency and foreign ownership.

“Excessive concentration of ownership and centralization of beef processing, supported and encouraged by our federal and provincial governments, has now put the health of workers, the beef supply and the livelihoods of thousands of farmers in jeopardy,” said Iain Aitken, a member of the National Farmers Union and Manitoba beef producer.