The pandemic is throwing a spotlight on those most vulnerable in Canada’s economy, and emboldening governments to take measures long urged by critics of the nation’s widening wealth inequality. The Tyee interviewed two economists who say the crisis could spur further policy shifts designed to shrink the divide.

People who are poor are most affected by the pandemic, noted Lars Osberg, an economics professor at Dalhousie University and author of The Age of Increasing Inequality: The Astonishing Rise of Canada’s 1%. And the pain is just beginning. “There's going to be quite a likelihood of a severe recession and it could last some time.”

“People in the homeless population typically have a lot of health problems, partly because their life is so stressful, so they're quite susceptible to all sorts of ailments,” Osberg said. “And, one of the things that a pandemic reminds us of is that their health affects our health, if they get sick, we get sick.”

Don Davies, the NDP MP for Vancouver-Kingsway, made similar points in a recent Facebook Live town hall. “I think we have to pay particular attention to the Downtown Eastside and vulnerable populations, like people that are living on the street who find it very difficult to self-isolate, and find it very difficult to keep social distancing,” Davies said. “So I think we have to put more resources and we have to try extra hard in order to assist those populations.”

“Public health and the prevention of epidemics and pandemics is just a good reason why you have to have a decent standard of living for people at the bottom of this society,” said Osberg. “And to pay for that, you need taxes on people at the top.”

He suggests taxing not just the earnings of wealthy people, but their holdings. Such wealth taxes, he said, “are useful ways of preventing the ever-increasing concentration of wealth.” Without such interventions, the stratum of people who make most of their money from increasing values of assets such as real estate and stocks will steadily pull away from wage earners in the percentage of overall wealth they control, the French economist Thomas Piketty has documented.

The pandemic will only hasten that divide, argued Osberg. “At the top of the income pyramid, if you've got a big salary, if you've got a lot of dividends coming in, [the pandemic does not much] affect you. But many, many people are working paycheque to paycheque and so it's a really big deal when suddenly paycheque dry up and that was what the welfare state was supposed to be all about, giving people a sense of economic security about their future.”

Osberg also expects to see renewed efforts to tax the money people leave behind when they die. “Canada is one of the few countries in the world that doesn't have an inheritance tax. Even the United States has an inheritance tax,” he said. “Historically, that was always a major initiative of social reformers to prevent the emergence of an inherited elite who just passed the fortunes from one generation to the next.”

“I think there was a sort of manufactured crisis in the mid-1990s about the debt levels [of provinces] and the debt level of the federal government,” Osberg said. “So [social welfare] programs were cut back dramatically in the mid-1990s, and then they were never restored, and that produced an increase in economic insecurity which amounts to a decline in our quality of life.”

Facing the post-pandemic recession, governments will have to weigh any criticisms about accumulating debt against the economic survival needs of many citizens. “Resentments build up when people can plainly see that they're not participating in the growth of incomes that they observe,” Osberg said.

“The last few weeks has clearly shown that you don't have to balance the budget, if government wants to spend a few hundred billion dollars, they can spend a few hundred billion dollars,” he said. “That's what they've just done right, in the space of like, a couple of weeks, these entirely new social programs have just appeared, right? Yeah. That could have been done at any point in time.”

“One way that the elite can kind of keep a lid on it is by looking for scapegoats,” Osberg continued, pointing to the immigrant-bashing tactics of U.S. President Donald Trump.

Expanding and strengthening the rights of employees

Kevin Milligan, an economics professor at the University of British Columbia, says he would like to see a change in how we talk about essential workers.

Given the shortage in coronavirus-fighting supplies such as masks, ventilators and testing kits, MP Davies believes that Canada should be making those products within its borders. “I have been calling on our government to ramp up domestic production of all of these to better ensure that we can produce these essential supplies and the equipment we want,” he said.

Osberg agreed, predicting “more of an emphasis on building this stuff here, because, you never know when the trade routes will get disrupted again.” 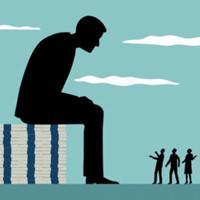 Talk Is Cheap: On Capitalism, Mental Health and Taxing the Rich

But Milligan offered a caution. “I think it makes sense to have some domestic productive capacity for emergency supplies but I would not want that to lead to a broad retrenchment of global supply chains which benefits so many of us in so many ways. If we shut that down, it would immiserate us all.”

Raising the floor for workers as higher unemployment becomes the norm

Canada’s employment rate fell to 58 per cent in March, the lowest since 1997. Rather than a blip, it may be a sign of what becomes normal in the future, said Osberg. “It's not just this downturn, it’s also the long-term thing we have to worry about when we have more and more technological unemployment.”

Osberg said the COVID-19 crisis provides a lesson we should not ignore, by illustrating “the need for a much stronger social safety net. Part of that is an unemployment insurance system that's worthy of the name. Part of that also is a guaranteed annual income.” To learn about how a guaranteed annual income could work, watch The Tyee’s short video explainer at the top of this piece.