The B.C. and Canadian governments’ pandemic response plans, last updated in 2018, anticipated that many health-care workers would be unavailable when most needed during the peak of a global pandemic. And not just because some would fall ill. As nurses and doctors in hard-hit hospitals in New York, Italy and Spain have attested in recent weeks, the pandemic fight is akin to war. Canada’s response plan writers knew from survey research and previous pandemics that many health-care workers — including nurses, doctors, cleaning staff and care-home workers — would quit the battlefield rather than risk their own lives or their families’ lives.

The risk they face is real. During the 2003 SARS outbreak in Toronto, 44 per cent of all infections were in health-care providers, three of whom died. The idea that many might march off the field during the COVID-19 pandemic was horrifyingly affirmed last month in Spain, when soldiers mobilized to support care homes found some were completely abandoned. Closer to home, a California nursing home was evacuated after its staff didn't show up.

Experts such as UBC bioethicist Judy Illes said the B.C. government has taken important steps to support health-care workers and thus minimize absenteeism. Steps so far include a raise for care-home workers and providing childcare to ease the burden on workers’ families. But they worry that a shortage of personal protective equipment in the weeks and months ahead may play into health-care workers deciding whether to work or stay safe at home.

Just how much job avoidance is happening in British Columbia and Canada is hard to document. Few health-care workers or institutions are eager to discuss it. Abandoning the front lines clashes with the prevailing health-care-worker-as-hero and national unity narratives of COVID-19.

When asked if British Columbia’s government was doing enough to reassure nurses and keep them on the job, Katherine Kitts, communications officer for the BC Nurses’ Union replied by email: “We are not interested in... criticizing the government on this. We feel that it is important, at this time more than ever, to be working together.”

Off the record, however, others confirm that workplace avoidance has begun. A source at a different B.C. union representing health-care workers said they are hearing from members who were off work — or considering that option — because they feared for their mental and physical health or wished to protect vulnerable family members.

More such absenteeism was to be expected, said that union official, as the pandemic intensifies: “This is coming,” she said.

That this is a real possibility was bolstered by interviews for this article with several health-care workers who left their jobs in the past two weeks or know colleagues who are off work because of health concerns. They include a phlebotomist at a private medical laboratory in Victoria, workers at Victoria-area care homes, and a front-line professional for a community clinic in Washington State.

How bad could things get? Canada’s 2018 plan assumed that 20 to 25 per cent of health sector workers would be off the job due to a mix of illness and “unwillingness to report” during the worst two weeks of a moderate pandemic. It did not quantify anticipated absenteeism for its “high impact” pandemic scenario — one akin to COVID-19 — but stated that “high absenteeism would put all sectors and services under extreme pressure.”

Research suggests the impact could be higher. In a 2010 survey of hospital workers at Johns Hopkins University in Baltimore, Maryland, “28 per cent indicated they would be unwilling to respond to an influenza pandemic,” according to study coauthor Daniel Barnett, a Johns Hopkins health policy expert. “Even more concerning, one-third indicated they would be unwilling to respond in a more severe pandemic scenario,” he said. Over three-fourths of health-care workers may be unwilling to work in certain circumstances according to survey data included in a 2015 meta-analysis by U.K. researchers.

Barnett called these research findings “extremely relevant” to COVID-19 given the concern health-care workers are expressing about access to PPEs such as masks and face shields. He cited the Spanish case as a worrisome signal that health-care workers’ “valiant and altruistic” response to date “could become compromised, particularly as the pandemic wears on.”

In the United States, many hospitals have instructed doctors and nurses not to speak out about their concerns, and some have fired employees who spoke out. Barnett called that “counterproductive.” He said multiple studies, including his own, find that making workers feel safe increases their willingness to work.

A front-line community clinician in Washington state said lack of protective equipment as well as the clinic administration’s reluctance to adopt other protective procedures contributed to her decision to resign.

Another factor was that she lacked family nearby, and feared there would be nobody to take care of her if she became sick. “I had no support besides co-workers who were already overwhelmed, and I felt like my life was in danger,” she said. “Everyone has a breaking point. I reached mine,” she said.

The B.C. pandemic response plan includes a 50-page “psychosocial support plan for health-care workers and providers” identifying emotional and psychological impacts of a pandemic and strategies for combatting them. The document advises that successfully managing a pandemic requires that health-care workers show up to work, and that rests on the workers’ knowledge and resilience:

“In order to increase the likelihood that [health-care workers] will be able and willing to continue working in a pandemic... [they] must trust that they and their families will be cared for, that their work environments will be made as safe as possible, that their voices and concerns will be heard and addressed as issues arise, and that they will have access to the resources they need to ensure they can effectively and safely perform their professional responsibilities.” 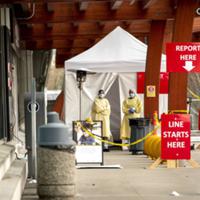 Illes, a UBC professor of neurology and Canada Research Chair in neuroethics, said the B.C. plan’s emphasis on ensuring that health-care workers feel safe speaks to the ethics of what workers are facing. Whereas nurses and doctors take an oath to serve their patients, and all hospital workers have some duty to do their part, Illes stressed that society has a duty to ensure that workers are safe. As Illes said, “The ethical duty turns on an analysis of the risk and benefit to the individual and to society. Institutions cannot compel somebody to put themselves in harm’s way.” (Though she noted that employment contracts often include “duty to work clauses” that seek to do just that.)

Illes said she hoped that most B.C. health-care workers would not have to face the ethical quandary of whether to work without protection thanks to the leadership from provincial health officer Dr. Bonnie Henry and Minister of Health Adrian Dix. “I have been watching them with awe and admiration for the forthrightness and the resilience they’re modelling in a challenging time,” said Illes.

The daily updates by Henry and Dix are really working to create trust, said Illes. She noted that trust enhances workers’ willingness to keep showing up in a pandemic according to research such as Barnett’s. “It’s almost like they’ve read these papers and know what it takes to get people to go to work and to do risky work. Transparency. Openness. That is really working right now in B.C.,” said Illes. As she put it: “Engendering public trust engenders good public behaviour.”