Be prepared for a long public health emergency with extended periods of social distancing perhaps lasting as long as 2022.

That’s one of the sobering conclusions from three different reports from some of the world’s top disease modellers and epidemiologists in England and the United States.

London’s Imperial College COVID-19 Response Team calculates that a gradual decrease in the number of reported deaths in Italy indicates that social distancing and a national lockdown has slowed the progress of the virus through the population.

There is an approximately three-week lag between the start of social distancing and its impact on cases and alleviating stress on hospital care.

The college estimates that dramatic changes in social behaviour in 11 European countries have probably already saved 59,000 lives as of March 31.

To date, the attack rate has been “highest in Spain followed by Italy and lowest in Germany and Norway, reflecting the relative stages of the epidemics.”

In addition, the modellers estimate that, across all 11 countries, “between seven and 43 million individuals have been infected with SARS-CoV-2 up to March 28, representing between 1.88 per cent and 11.43 per cent of the population.”

That means 90 per cent of the population due to successful social distancing still has no immunity and will be vulnerable to the next wave of the pandemic.

“It remains critical that current interventions remain in place,” concluded the researchers.

Now, for some bad news.

Another group of modellers and epidemiologists at Harvard University warns that a single period of social distancing will not be sufficient to quell the pandemic in any given community because the virus will come roaring back once restrictions have been eased.

On and off periods of social distancing, of course, “present a substantial social and economic burden” said the researchers.

(Most pandemics come in waves. The Spanish flu came in three waves between 1918 and 1920. It infected a third of the population and killed as many as 55,000 Canadians. The second wave killed the most people.)

Communities that successfully “flatten the curve” for the first wave of COVID-19 will not be able to abandon their vigilance, added the researchers.

A successful social distancing summer campaign might keep hospitals functioning but it will prolong the pandemic by creating “a high density of susceptible individuals who could become infected in an intense autumn wave.”

For the next two years, intermittent social distancing might have to be imposed for 25 to 70 per cent of the time depending on the seasons in order to “keep hospitals from being critically overloaded.”

For communities that have flattened the curve, the biggest risk will remain “re-introductions of SARS-CoV-2 from locations with ongoing outbreaks.”

The modellers suggest that new drugs or aggressive contact tracing and isolation of the infected — a strategy hampered by shortages of tests in most jurisdictions, “could alleviate the need for stringent social distancing to maintain control of the epidemic.”

A third study by Kiesha Prem at the Centre for the Mathematical Modelling of Infectious Diseases in London, England, underscores that the emergency will be long.

Her team developed a model that tracked the effect of physical distancing over time based on the number of social contacts individuals engage with every day by age group at home, school, work and other locations in Wuhan city.

Prem and her fellow researchers found that if Wuhan relaxed restrictions on social distancing in March, the virus would come roaring back three months later in June peaking in August. 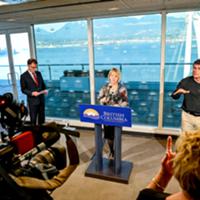 An easing of restrictions in April would buy two months before the virus re-emerged in August with a peak in October.

In other words, an additional month of physical distancing after an outbreak will only buy two months of relaxed measures before the reinstatement of lockdown to protect hospitals from being slammed by the virus.

But there is no doubt that social distancing takes the edge off the virus and has “a strong potential to reduce the magnitude of the epidemic peak of COVID-19 and lead to a smaller number of overall cases.”

“Premature and sudden lifting of interventions could lead to an earlier secondary peak, which could be flattened by relaxing the interventions gradually,” warned Prem’s study.

Gabriel Leung, an infectious disease researcher at the University of Hong Kong recently summed up our collective predicament in the science journal Nature:  “The tension between health, protecting the economy and emotional well-being will vex every government for the foreseeable future.”