The fact that huge numbers of British Columbians don’t have a family doctor won’t likely be a factor in dealing with the growing COVID-19 health emergency.

There will however be major stresses on the health care system and the people working in it, and the province is beginning to take steps to address them — though it isn’t yet accepting every offer of help.

“I don’t think that our absolutely crumbling, completely inadequate, primary care system is necessarily going to make COVID worse,” said Rita McCracken, a family doctor who practises in East Vancouver, provides care in a nursing home and teaches at the University of British Columbia.

“Right now the best thing that almost everybody can be doing for their health is to stay home,” McCracken said. “Not being able to go to a doctor that you don’t have doesn’t really present a problem.”

At the time the provincial government said some 760,000 British Columbians, nearly 17 per cent of people in the province, lacked access to a family doctor or other primary care provider. More than half of British Columbians said they couldn’t get an appointment the next day when they sought one and nearly three quarters were unable to get care on evenings or weekends without visiting an emergency department.

Nearly two years later, The Tyee’s attempts to get updated numbers through the ministry’s communications department and the freedom of information process have so far been unsuccessful.

“It is unlikely there’s been any change from a year and a half ago,” McCracken said, noting that lack of access to primary care is a long-standing issue. “We’ve known for a long time, I would say at least a decade, that we have had inadequate primary care resources to provide continuous community-based primary care.”

That kind of care is proven to reduce both mortality and costs, she said. “You need to have a place, not necessarily a human, but you need to have a primary care clinic where somebody is attached and known as a person, not as a set of illnesses.”

In the case of COVID-19, however, while better primary care might have meant more people were healthier going into the crisis, there are better ways to access care than going to see your family doctor.

“The thing that’s really unusual about this is it’s a viral illness and so the vast majority of people who become affected by it, it’s really the good old TLC, lots of rest, fluid, staying at home, and riding it out,” McCracken said. “The people for whom it is not, it’s not going to be your family doctor that’s going to help you. It’s that you are potentially going to need special drugs and special machines to help your body’s organs work.”

If you think you have the virus

The advice from public health officials to people seeking medical help for possible COVID-19 infections has been to call the 811 Health Link number or to call ahead to a doctor’s office or clinic, rather than just showing up. For anyone experiencing shortness of breath, they should call the 911 emergency number. The government has also set up a toll-free number — 1-888-268-4319 — for people seeking information about COVID-19. And it's created an online self-assessment tool to help people determine if they need testing.

“You should avoid going to your family doctor to just check in,” McCracken said. “You should be trying to connect with them virtually rather than coming in. Even though we sent all of our patients an email, and we called all of them yesterday, we still had some showing up today who were symptomatic to say ‘we just wanted to come in.’”

The province announced Monday it is changing the billing system so physicians can be compensated for providing virtual-care services like consultations with patients over the phone or internet.

That’s a good move that will relieve pressure on primary care clinics, McCracken said. “If that hadn’t have happened, I can’t even imagine.”

Steps by the province

The province is taking other steps to prepare the health care system for a surge as more people become ill.

It is postponing all non-urgent scheduled surgeries, buying long-term care beds to move people into from hospitals, setting up a dedicated COVID-19 unit at Lions Gate Hospital in Vancouver and allowing pharmacies to provide prescription refills or emergency supplies of medication without a patient first seeing a physician.

The goal is to increase the capacity in the system to deal with the expected bulge in the number of patients needing treatment for COVID-19. B.C. has fewer intensive care beds and ventilators (1,272 for a population of five million) than most other provinces.

The province has “requested all health regulators to begin emergency registration of non-practising or retired health-care professionals, including professionals from other jurisdictions and the armed forces.”

One group of physicians who could be available are International Medical Graduates, people who have graduated from medical schools in other countries but who have not finished qualifying to practise in Canada.

“We ask to be accepted to help working with the group of hospitalists, or in small teams with other doctors, or help in any part of the system, as we know it will be [in] overflow soon,” Heidi Chable, the president of the Association of International Medical Graduates of B.C., said in an email. She noted that Spain is using IMGs in its response to the crisis.

There are about 220 International Medical Graduates in B.C. who have passed the exams needed to practise in Canada, but who may not have completed residencies or other requirements. The association says it’s receiving many calls from IMGs wanting to help and has been compiling a list of those available to help. It has offered their services to the provincial government, but so far the offer hasn’t been accepted. 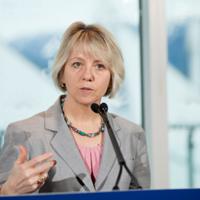 As well as bringing diverse language and cultural backgrounds that could be useful for reaching various communities, IMGs tend to be younger than retired doctors. Chable questioned the wisdom of bringing older people back to work, noting they may be more vulnerable to the virus. The United States’ Centre for Disease Control has said physicians over 60 should stay home.

A health ministry spokesperson referred questions about IMGs to the province’s College of Physicians and Surgeons.

Retired doctors could be recruited

A spokesperson for the college said it has not considered recruiting International Medical Graduates who have never been registered to practise in the province.

“At the moment the college is only considering B.C. physicians who have been retired from practice for no more than two years,” they said Tuesday. “Physicians will be re-registered only if the health authorities identify a need to address health-care system shortages. As of today, none have been called into service.”

Asked about concerns with retired people returning to work to help with a pandemic that is more dangerous for older people, they responded, “The physicians who are selected will be screened, and they will be under direct supervision in the health authorities doing very specific tasks such as working in assessment clinics, and they will need to take all of the necessary precautions. They won't be working alone in private practice.”

McCracken said B.C. may yet find it needs to draw on IMGs. “If we run out of health care workers and we need them then yes, absolutely, and I’m sure there will be some great innovations that will evolve to allow us to do that,” she said. “I think at this point, especially within primary care, there’s not a need for that.”

As of Thursday, there were 271 cases confirmed in the province and there have been eight deaths. The experience of China, Italy, Iran and other jurisdictions suggests those numbers are likely to keep growing.