An Anna’s hummingbird zoomed past as I entered our backyard the other day and proceeded to hover directly in front of my face, its head and throat glowing an electric fuschia. The tiny bird showed no fear — it looked calm, even arrogant — hanging in the frosty air like a miniature Clint Eastwood.

It’s always a bit of a shock to see these iridescent, tropical-hued birds in the depths of winter, but the Anna’s is a year-round Vancouver resident, a surprising fact perhaps, but necessary for a creature that owns the title of Vancouver’s official bird.

The Anna’s hummingbird, which was named after Anna Massena, a 19th century French duchess, easily defeated the northern flicker, varied thrush and spotted towhee in balloting to earn the title of Vancouver’s official city bird in 2017. Unlike previous winners, who held the honour for only a year, this is a permanent designation. The stability allows the bird to be used in branding initiatives by artists, community groups and businesses eager to promote their affinity with nature.

The press release issued by the city that heralded the Anna’s triumph described it as “classy, urbane and stylish, with the heart of a tiger,” which sounds suspiciously like the sort of lingo used to sell cars. It‘s certainly not an accurate depiction of the bird, which is a far more complex mixture of muscle, feathers and buzzing electrons. A more truthful description would be “tough, pugnacious, beautiful, smart, sex-crazed, sugar junkies.”

Make no mistake, hummingbirds are serious badasses, a fact recognized by the Aztecs, who named their most powerful deity, Huitzilopochtli, after the diminutive bird. In fact, when Aztec high priests drew their obsidian knives and made human sacrifices to Huitzilopochtli, they wore sacred cloaks made entirely of shimmering hummingbird skins.

Revved to the max

Like all hummingbirds, the Anna’s spends much of its life in overdrive. When flying, their hearts, no bigger than an infant’s fingernail, beat 1,200 times a minute. Every 60 seconds they breathe 250 times. In a typical day they will visit hundreds of flowers, dining every 15 minutes. It’s not an idle pursuit — they must consume twice their body weight in insects and nectar on a daily basis just to survive. They drink the nectar with tubular tongues that work like pumps and are so long that, when retracted, coil up inside the birds’ heads, around their skulls and eyes. The nectar, which is 26 per cent sugar, acts like rocket fuel, powering their high-octane lifestyle.

Hummingbirds burn energy faster than any creature except flying insects. An average-sized male human burns between 2,500 and 3,000 calories a day. If a similar-sized hummingbird existed, it would burn more than 150,000 calories a day. American ornithologist Crawford Greenewalt once calculated that if we used energy at that rate that hummingbirds do, our skin would heat up to 400 C. Hummingbirds don’t overheat largely because they have so much exterior and so little interior; no part of them is far enough from the surface to trap much heat. These flying furnaces do cool down at night, however, when they enter torpor and slow their heart rate from a fluttery resting pulse of 21 beats per second to little more than one beat every two seconds.

The ability to slip into a type of hibernation on chilly nights helps the Anna’s survive our cold and rainy winters. The other factor is the abundance of backyard feeders and ornamental flowers found throughout the city, which provide them with a year-round food supply, in addition to the insects, spiders and tree sap they also feed upon.

Even so, the cold-adapted Anna’s most Vancouver-centric characteristic may be that it came from somewhere else. Until about 50 years ago these birds only resided in southern California. But they gradually began to move northward in what scientists describe as one of the most remarkable range expansions to occur in a North American species. These opportunistic aviators now breed from Arizona to southwestern British Columbia and have even been spotted in Alaska.

Ann Nightingale, vice-president of the Rocky Point Bird Observatory in Victoria, says that the first sightings of the Anna’s in B.C. date back to the 1960s when it began appearing in Victoria’s more affluent neighbourhoods, places with large, fancy gardens and backyard feeders. However, most of those birds still flew south during the winter. The real population surge took hold in the 1990s. Today, the Anna’s are solidly entrenched in southwestern B.C., their numbers having risen in synch with the growing human population. “At the 2018 Christmas count we counted 1,100 in the Victoria area,” says Nightingale.

In the hummingbird lab

Yet, despite their ubiquity, most people are unaware of the amazing attributes of Anna’s hummingbirds, and of hummers in general. Their unique, specialized physical qualities have long intrigued scientists, including UBC zoologist Doug Altshuler, who has spent two decades studying hummingbirds and who operates one of a handful of labs in North America that work with live hummers on a regular basis.

“Hummingbirds are fascinating to study because they operate on the edge of extremes,” says Altshuler, who conducts his lab work with Anna’s hummingbirds. Using high-speed cameras, he has tested the birds in a range of conditions to better understand the biomechanics of their flight. He has tracked their fight patterns by photographing them as they buzz through laser-illuminated particles of olive oil and studied the way they respond to moving images in a virtual reality flight chamber. To gauge their strength and agility, he has had them fly while wearing a necklace of weighted beads or being buffeted by wind. He has also analyzed how they can maintain steady turns with a rapidly revolving feeder and measured their responses to flying in varied oxygen levels and air densities.

Altshuler likens hummers to elite athletes, a description that may seem odd when applied to a creature that weighs less than a nickel, but their size belies an incredible complexity. These are not fragile, about-to-fall-out-of-the-sky jewels; they are rugged and resilient creatures whose habitat extends from Alaska to Tierra del Fuego and which rises from sea level to the rim of 5,000-metre high glaciers. Two of the species found in Canada make grueling migratory journeys: the rufous hummingbird travels 3,200 kilometres to Mexico and Central America, while the ruby-throated hummingbird’s route includes a colossal, 18-hour non-stop flight over the Gulf of Mexico, a trip so daunting for a bird of its size that popular folklore has long held that they accomplish the feat by hitching rides on the backs of geese.

The male Anna’s reach these supersonic speeds when performing a courting ritual that sees it climb up to 40 metres above a watching female and then suddenly plunge sharply downward. At the bottom of this kamikaze manoeuvre it produces a high-pitched chirp. The noise was once thought to emanate from the Anna’s syrinx, but U.S. biologist Chris Clark, who filmed the courtship dive in 2009, proved that the sound is actually generated by air rushing through its tail feathers. (Listen to Display on this page.)

Contacted by phone at the University of California at Riverside, Clark describes the ritual. “The bird dives toward the sun so it will light up the iridescent feathers and the magenta patch on its throat. It looks like a magenta fireball getting larger and larger and then finally exploding. All the light is reflected in the direction of the female.” Typically, the male repeats the dive 10 to 15 times, but Clark filmed one randy male who executed 77 dives in a span of 15 minutes with only one short rest in the middle. “We were using a caged female as a lure, but I had another dead one mounted on a stick that was leaning against the cage. Maybe this guy just thought, ‘Wow! I got two females here.’” After such manic physical exertion, the actual act of copulation lasts a mere four seconds.

Breeding season begins in December and can last until June. The female usually lays two tiny eggs in each brood. Once the chicks hatch, she raises them alone, as the males immediately jet off to woo other potential mates. The females may prefer that the males depart rather than stay and compete for food. Although they are tiny, hummingbirds need colossal amounts of energy to fuel their flights, so they live in a perpetual mania to find sustenance.

The fact they can literally starve to death in a few hours helps explain why they defend their food sources so vigorously. Gram for gram, they rank among the most truculent of nature’s creations. Sheri Williamson, a naturalist at the Southeastern Arizona Bird Observatory, once joked that if hummingbirds had human language, “their vocabulary would be 100-per-cent swear words.”

“They are highly territorial,” notes Altshuler. “They will drive other hummingbirds away from the flowers they feed on. They fight duels in mid-air and use their bills as daggers. It’s not playing. It’s for real,” he says, showing me a photo of two deceased hummingbirds with each of their bodies impaled on the other’s bill.

Hummingbirds also have a huge memory. In fact, their hippocampus — the area of the brain responsible for learning and memory — is up to five times larger than that in songbirds, seabirds and woodpeckers. They can remember where every flower in their territory is located and how long it takes to refill with nectar after they have fed. They also can remember year to year where each feeder is, both in their home territory, and along their migration routes. 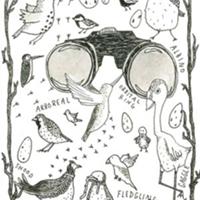 Birds to Live By

The Anna’s doesn’t migrate, of course, making it the only one of the five species of Canadian hummers that doesn’t flee south. This sort of defiant stoicism seems distinctly Canadian and another reason to back its suitability as Vancouver’s official bird. Overall, UBC biologist Benjamin Freeman thinks the Anna’s was a good choice for the title. “First off, it’s surprisingly obvious for such a tiny bird. They interact a lot with people,” he says. “It’s also a strikingly beautiful bird with an amazing set of physical adaptions. It has unparalleled ability to hover in place and to fly in all directions, even upside down. It captures our imagination.”

Hummers do seem to be imbued with magic. Simply seeing them dance through the air can deliver a spiritual boost, and like the redheaded male Anna’s that recently materialized in my backyard, offer a reminder that beauty is right in front of your eyes if you only take the time to watch and savour — even if that beauty may sometimes appear to be trying to decide if you might be edible.