From the outside, Vancouver’s exclusive Shaughnessy neighbourhood looks pristine. Big houses, many built around the turn of the 20th century, sit on large, impeccably landscaped lots. The streets are lined with tall trees, giving the neighbourhood a park-like feel.

But stay long enough and you’ll notice something strange. The parks are empty. You can walk blocks without meeting a soul. After dark, it can be downright creepy.

“If you come through Shaughnessy at night, I feel less safe there than in a lot of places in East Van,” said Justin Fung, a local housing activist who grew up in the neighbourhood in the 1980s and ’90s.

Fung’s parents still live in Shaughnessy, and he’s often in the neighbourhood to visit them with his school-aged daughter. But he said it’s changed since he grew up there, when kids would roam freely between houses after school and Halloween meant streets filled with trick-or-treaters and noisy with fireworks.

A slew of statistics support Fung’s observations. As the price of many homes in the upper-class neighbourhood climbed beyond the $10-million mark, Shaughnessy was also becoming emptier.

Now one developer is hoping to convince residents of the multimillion-dollar neighbourhood that the cure for this hidden rot is more people — and specifically, more renters. Richard Wittstock, principal of Domus Homes, hopes to build a four-storey apartment building at Granville and 32nd Avenue. The 85-unit project would replace two single-family houses.

It could be a hard sell. In June, Vancouver city council rejected another rental building that had been proposed for a site just a block from Domus Homes’ project. The 21-unit complex would have replaced one large home, but many critics opposed it because it would be next to a hospice and rents at the new building would have been very high. The hospice said the construction and loss of privacy and quiet would be too disruptive for patients.

Without the factor of the hospice in play, Wittstock said he’s hopeful residents will support his project. At an open house on Sept. 6, people offered a range of opinions, Wittstock said, from long-time Shaughnessy residents who are interested in downsizing and want more housing options for their adult children to comments like “this neighbourhood is no place for children.”

“That left me wondering who these big houses are for,” Wittstock said. With elementary and high schools nearby and major employment centres like B.C. Women’s and Children’s hospitals, it makes sense for young families to make the neighbourhood their home, he added.

Wittstock acknowledged the rents at the new building wouldn’t be particularly cheap. Rent rates would likely be set at around $1,768 for studios, $2,056 for one-bedrooms, $2,703 for two-bedrooms and $3,559 for three-bedrooms.

Fung opposed the 21-unit townhouse project because he thought it was the wrong location for a new development, but thinks he’d support Wittstock’s proposal.

On a stroll around the streets near his childhood home, Fung talks about how he took his daughter trick-or-treating here two years ago.

“It was a total waste of time to trick-or-treat through that neighbourhood, because it was such a sad scene,” Fung said. They gave up on Shaughnessy and headed instead to nearby Douglas Park, where duplexes and infill are common, and found a busy Halloween hotspot.

Things were different when he was growing up.

“The houses were big and spaced out, but there was a certain vibrancy to the neighbourhood,” he recalled. “Our neighbours now, we only see them in the summertime. They’re here in the summer with their kids, and then they disappear.”

Recently Fung and his daughter visited a nearby park and found the normally deserted green space full of families with young children having a picnic. Fung found out they lived nearby, sharing one large house they were renting together.

“It was the first time in years I’d seen that,” Fung said. “To see kids shouting in the street — I was happy to see that again.”

Fung said he doesn’t think tall towers are appropriate for the neighbourhood, but he’d welcome ground-oriented, low-rise housing. He mused that it would be nice to see the big houses renovated to contain multiple suites, one way to add more life to the neighbourhood while keeping its current look and feel.

Not surprisingly, some Shaughnessy residents don’t share Fung’s view. Writing in the spring 2019 newsletter of the Shaughnessy Heights Property Owners’ Association, Shirley Hebenton said the Domus Homes project would “destroy a lovely house, cast shadows on and overlook its two neighbours” and the proposed building would be a “large entity that makes no effort to fit into the neighbourhood ambiance.” (As currently proposed, the project would replace two houses, not one.)

Hebenton also wrote that rents won’t be affordable, the new building could make on-street parking spots harder to find and there are no nearby shops or other amenities within walking distance.

Members of the property owners’ association did not respond to emailed requests for an interview for this story, but it’s not the first time they have opposed more density for the neighbourhood.

In the same newsletter issue, Anthony Chu wrote that many Shaughnessy homeowners have no interest in building a rental laneway house because it “reduce(s) the desirability of properties in... Shaughnessy since privacy is paramount. The reality is not many homeowners bought in this area to share his/her house with tenants.”

In the spring 2017 issue, Mik Ball ended a heated missive by comparing denser housing to the tactics of slave ship captains. “The ‘right’ to live in this city is a myth but Vancouver’s political leaders are clinging to it tenaciously,” he wrote.

The upper end of inequality

As much as the city can try to change zoning for low-density neighbourhoods, Shaughnessy shows that there are limits to this approach, said Andy Yan, an urban planner and director of the City Program at Simon Fraser University.

“You have situations where you could promise all these changes in the zoning, but there is a certain pool of people who just don’t want it,” he said.

In 2018 the city released a map showing where laneway houses had been approved; Shaughnessy is an empty spot on the map compared with the tight clusters that dot neighbourhoods to the west and east of Shaughnessy.

Yan observed that in the ’70s and ’80s homes in Shaughnessy were attainable for upper middle-class professionals. But with the extreme rise in real estate prices, even people who are in the “one per cent” of local Vancouver incomes ($250,000 a year or more) can no longer afford the neighbourhood.

That leaves homebuyers who might have three or four homes around the world and only live in Vancouver for a few months of the year. To Yan, the well-maintained emptiness of Shaughnessy is in itself a status-symbol for the very wealthy.

“And to see the decline in population maybe speaks to just the levels of wealth that we’re talking about, and it’s a wealth not connected to local incomes.” 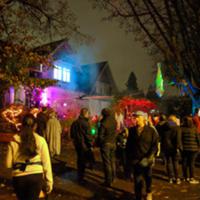 No, Rich People Do Not Give Out the Best Halloween Candy

Homeowners in Shaughnessy and across Vancouver’s westside have been feeling the effects of new taxes that have been introduced since 2016 as governments tried to rein in soaring property price growth. The taxes are aimed at empty homes, real estate speculation, foreign capital and homes worth over $3 million. Since 2017, westside home prices have fallen, with many houses sitting on the market for months.

With such dire housing need across the city, Yan is skeptical that Wittstock’s proposed rental building will make much of a dent, because rents will still be on the high end. But for Yan, Shaughnessy’s place in a city that has become so sharply divided between rich and poor is an interesting question.

“It was always on that upper end of inequality, but what does it mean now? How does it fit into that narrative now?” Yan said.

“That touches upon those profound questions of the city. The question isn’t just, is Shaughnessy broken, but is Vancouver broken?”