One day between five and ten centuries ago, people living on what is now known as Keith Island finished eating a geoduck clam and placed its shell neatly alongside others.

The implications of that moment — brought to light this month by archeologists — loom large for Indigenous nations pursuing the right to harvest and sell geoduck clams on their territories in British Columbia.

Keith Island, part of the Broken Group Islands off the west coast of Vancouver Island, is the territory of the Tseshaht First Nation, one of 14 nations that make up the Nuu-chah-nulth people of western Vancouver Island.

University of Victoria archaeologist and assistant professor Iain McKechnie said several shell fragments and a large, intact geoduck clam shell was found more than a metre deep in a pit on Keith Island on July 13.

The find proves that Tseshaht, before the arrival of Europeans, had access to and consumed geoduck clams, among other species. This discovery could support other coastal First Nations’ fisheries rights claims when it comes to shellfish.

Geoduck is a species of gigantic saltwater clams with a retail price of up to $30 a pound on the Asian market, where they’re highly sought-after due to their supposed aphrodisiacal attributes. The Chinese market for geoducks from Canada got a boost when China placed a tariff on U.S. producers in retaliation for tariffs imposed on Chinese goods by the Trump administration.

In 2009 the B.C. Supreme Court ruled that Nuu-chah-nulth-aht have a constitutional right to fish and sell fish from their territory, but geoducks were excluded from the ruling. The court argued that the species have only been harvested since the invention of modern equipment and there was no evidence that First Nations collected them.

“To my knowledge, this is the first time I’ve seen geoduck archaeological remains — we are confident that this is not a horse clam,” stated McKechnie.

McKechnie went on to say that this is the first find of this type in Nuu-chah-nulth territory and even on the coast of British Columbia.

Tseshaht Councillor Luke George said that members of his nation heard the news about the geoduck find and were pleased.

“It is exciting to have proof that helps our case when it comes to our rights to harvest shellfish; this solidifies something for Tseshaht, and for that, we are grateful,” he said.

The geoduck shells and other materials unearthed at Keith Island this summer will be sent to the University of Victoria for analysis. 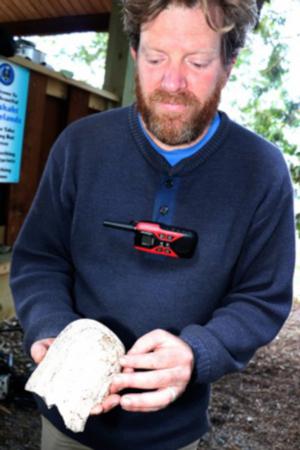 Over the past three summers, archaeology students unearthed thousands of artifacts on Keith Island, including a full set of bones from a woolly dog that is now extinct. The geoduck shells were found nearby, in a place that had been used continuously by Tseshaht for hundreds of years.

Archaeologist teams work at the site for two weeks each summer. This year is the third at Keith Island. The work is made possible through a partnership among the UVic Archaeology Field School, Parks Canada and Tseshaht First Nation .

McKechnie said the shells were located in a deposit that is at least 500 years old but could date back as much as 1,000 years.

“It was in a feature with other clams,” he said, adding that it appeared that the collection of shells may have been part of an ancient clam bake.

The shells appeared to be arranged purposefully and many intact shells were found with both sides of the shell aligned.

In addition, the shells in that layer of earth had evidence of oily residue inside the shells along with charred organic materials, like vegetation.

What this shows is that past generations of Tseshaht harvested these and more than 40 other species of shellfish, and brought them home for processing at this site, said McKechnie, whose work is part of the Hakai Institute’s marine science programs funded by the Tula Foundation.

Denis St. Claire, an archaeologist since 1970, is the Tseshaht representative on the project and its co-director. He pointed to a long ridge that runs parallel to the beach, saying that it was a mulch pile made up of bones and shells that would have been outside the longhouses that were once there. 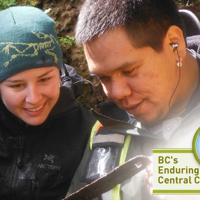 A few feet away lies a toppled tree, its roots studded with seashells hundreds of years old — shells that nurtured the tree until it fell.

There were pits on each side of the ridge, each about two metres square and just under two metres deep. The UVic archaeologists uncovered several generations of cooking hearths in one pit and even a shadowy impression left from a wooden house post.

The island was inhabited up until the 1950s so the top layers of soil contain items that came after contact, like metal nails and wood stove parts.

“This island contains both a past and current history,” said St. Claire.

With files from The Tyee.

A version of this story first appeared in the Ha-Shilth-Sa, Canada’s oldest First Nations newspaper, published by the Nuu-Chah-Nulth Tribal Council.