The president of the union that represents workers at ICBC and BC Hydro was having an “I told you so” moment as B.C.’s finance minister presented a budget Tuesday undermined by financial problems at the two Crown corporations.

“It’s disheartening for us and our members who’ve been warning about this for a long time,” said MoveUP President David Black.

In past years both ICBC and BC Hydro had provided hundreds of millions in dividends that former governments used to balance the province’s books, even as their own finances deteriorated.

The current government recently announced it was writing down $1 billion of BC Hydro’s debt and returning the Crown corporation to BC Utilities Commission’s oversight. And this week’s budget included a $1.18-billion loss in 2018-2019 at ICBC.

ICBC is budgeted to have a relatively small loss in 2019-2020 before returning to profitability, but even the minister responsible, David Eby, is skeptical about whether changes the government has made will succeed.

Contributing factors included a rising number of claims, higher payouts, escalating legal fees and a failure to allow premiums to go up quickly enough to cover the growing costs.

“I am hopeful and cautiously optimistic around the impact that the reforms are going to have,” Eby said. “But I have been on this file too long to have 100-per-cent confidence.”

Changes include a cap on payouts for minor injuries, dealing with more claims through a civil resolution tribunal instead of court, and limiting the number of expert witnesses who can be used in court cases.

Eby said that ICBC staff have reviewed the projections, and they’ve been confirmed by an outside reviewer.

“However, all it takes is one court judgment to overturn the structures we’ve established for the tribunal to hear these cases and we’re going to have to be looking at other ways of moving forward,” he said.

He expects the reforms will be tested almost immediately once they come into effect April 1, he said. “It’s our feeling these rules are all entirely constitutional appropriate, and not only that, good public policies.”

At BC Hydro, a report released last week found ratepayers will pay $16.2 billion to buy electricity from independent power producers that’s not needed.

“For many years we were telling the government they were going the wrong way on BC Hydro, and the costs were going to come in,” MoveUP’s Black said. “We found out last week it’s $200 a family a year that they’re paying for their electricity rates that they shouldn’t have been paying.”

IPPs, the majority of which are run-of-river hydro projects, produce electricity in the spring when BC Hydro’s own reservoirs tend to be full or close to it.

Sometimes at that time of year, Black said, BC Hydro is spilling water over the tops of its dams because it doesn’t need the power. “This is when the IPP projects are running. It’s crazy.”

The problems go back to conditions that the previous government set on BC Hydro, Black said. “I’m a little more charitable than many people are. I think [former premier] Gordon Campbell was trying to address climate change, he was trying to make a move to clean power.”

Campbell’s ideology, however, got in the way, said Black. “He insisted those projects be built privately, and we know now our warnings unfortunately came true. The cost of doing those projects privately is much, much higher than publicly.”

The BC Liberal government also mandated that BC Hydro be self sufficient in its power production and closed Burrard Thermal, taking away options for the utility.

Previously, Black said, BC Hydro would buy power from the United States when it was cheap and save water behind the dams, and then sell power when the price was higher.

“Traditionally BC Hydro’s made a lot of money doing that and that’s kept all of our electricity rates low,” he said.

Currently, BC Hydro is obligated under contract to buy power from IPPs at roughly three times what it could buy it for on the spot market.

It’s harder to be charitable about the problems at the province’s auto insurance company, Black said.

“I’m a little more cynical about [ICBC], because the government did get a report in 2014 saying this problem’s coming, here’s some solutions to deal with it, and instead of taking action on it they buried the report.”

Despite knowing about the problems, the government continued to take money out of the corporation, he said. “They did nothing. In fact, they excised part of the report and then buried the rest of it.” 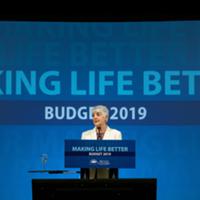 Is BC Getting More Affordable? Six Hints from the New Budget

“We see now the scope of that problem,” he said, noting the loss was $1.3 billion last year and $1.1 billion this year. Reforms that were recommended five years ago and finally taken up recently should return ICBC to profitability, he said.

“We see light at the end of the tunnel, at least at ICBC, and a commitment at BC Hydro to look at mitigating those costs in the future.”

“Fiscal mismanagement turned ICBC and BC Hydro into fiscal messes,” she said.

Neither BC Liberal leader Andrew Wilkinson nor either of the caucus’s two finance critics was available to comment Wednesday afternoon.

One of those critics, former BC Hydro board member Tracy Redies, did say in the legislature Tuesday that she doubted the mess at ICBC could be fixed quickly.

“Based on ICBC’s $300 million in additional losses to forecast this year, we remain highly skeptical that ICBC can get back to the black in one year, which is essentially what this budget is forecasting in 2019-20,” she said.

Iglika Ivanova, senior economist in the B.C. office of the Canadian Centre for Policy Alternatives, said the financial holes at BC Hydro and ICBC are significant.

“Imagine if instead of a $1-billion write-off for BC Hydro and another billion for ICBC, we had these $2 billion to spend on poverty reduction, or on climate, or on housing,” she said.

“That would have been a very different budget. It’s unfortunate that mismanagement from the last government is holding us back.”