“We have an extraordinarily affluent society here in British Columbia with a public health-care system, and also, by any standard, a large measure of inequality,” Dix said, adding that by most measures B.C. has the highest degree of inequality in Canada.

“How do we deal with that, and how do we invest as a society, and how do you act as minister of health to address that? It’s a big challenge.”

Dix was speaking at a Victoria meeting of people involved with Community Health Centres in Canada and the United States, organizations that in many cases provide team-based primary health care to people living in poverty along with other kinds of help such as with housing and employment.

“What this government has done, in our first budget when we came into office in May and September, is a series of actions that were all about health care, but nothing about the Ministry of Health at all,” Dix said.

The government started by raising income assistance rates by 16 per cent, he said.

Then it made sure there would be free university tuition for anyone who had been in government foster care. “We had been their parents, and we had fundamentally let them down,” he said to applause from the audience of around 100 people.

The government created a new Ministry of Mental Health and Addictions headed by Judy Darcy, he said. “We invested not in the general health-care system, but $300 million to address a crisis in our society, which is an opioid crisis which killed last year 1,500 people in B.C.”

It eliminated PharmaCare deductibles for people with low incomes so people wouldn’t have to choose between paying for medicine and buying food, he said.

“The main focus of what we did was to address issues of inequality, issues that we call the social determinants of health,” he said, noting that his ministry already receives nearly half of the government’s spending on programs. 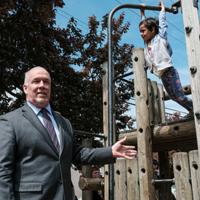 Health Tax and Educational Opportunity Are Good for the Economy, Premier Says

“All of these things are political choices, and they take place in the context of real challenges for health care in general.”

The 100 Community Health Centres in the province, which the government gave a budget boost of $2.13 million in March, are part of an effort to provide appropriate primary care to everyone, he said.

Following the speech Dix told reporters that providing primary care more efficiently would help free up money for the government’s other priorities.

In the coming weeks the government will introduce a poverty reduction plan that will set real targets and include real action, he said.

Much of what the B.C. government has already done, including launching a universal childcare program and investing more in schools, will help in the long term, he said. So will the steps the province is taking on housing and the role it plays in increasing the wealth gap in the province.

Dix began his speech by saying that after 12 years advocating on issues as an opposition MLA, it was “magical” to have formed government.