The covenant includes the requirement that students abstain from sexual intimacy outside of the bounds of marriage between a man and a woman, which has led to criticism that Trinity Western University discriminates against lesbian, gay, bisexual, trans and two-spirited (LGBTQ2S+) people.

The move, announced in a press release issued Aug. 14, comes two months after the Supreme Court of Canada ruled the Law Societies of Upper Canada and British Columbia were reasonable to deny accreditation to Trinity Western University’s proposed law school on the basis of perceived discrimination in its community covenant.

While the university has long maintained that LGBTQ2S+ students are welcome, before Tuesday’s announcement it had not wavered from its stance that signing the covenant be mandatory.

“It’s a recognition that historically we have always been a welcoming and open environment, there has been no pre-selection based on religious views” or identity, said university President Robert G. Kuhn, adding the school has always accepted LGBTQ2S+ students, as well as students of other religions.

“The covenant expresses Biblical perspective on a lot of things, it’s aspirational for the most part and somewhat behavioural. There was a view that it wasn’t helpful to communicate our welcoming environment by having people sign a document such as the community covenant.”

However, faculty and staff will still be expected to sign and adhere to the covenant, which remains a foundational document of the university.

“Faculty and staff are long term members of our community, and our legislated mandate is to provide higher education to all comers from a Christian perspective and point of view,” he said, adding Trinity Western was founded by the Evangelical Free Church, which, unlike some other Christian denominations, does not recognize or perform LGBTQ2S+ marriages.

“In order to do that, we need to have, consistent with our mandate, professors and staff who carry out that mandate.”

That worries Margot Young, law professor with the University of British Columbia, who specializes in constitutional and social justice law.

“I think that’s concerning from the perspective of somebody who teaches at a law school that the teaching of inclusivity and human rights will be framed by a Biblically based paradigm that condemns the full sexual diversity of humans,” she said.

While Young stops short of saying TWU shouldn’t have a law school, she says the school’s paradigm, and the basis of the law school in that paradigm, “makes me doubt how well they’re going to be able to achieve the kind of inclusive, diversity-celebrating legal education we should all aspire to give our law students.”

That being said, Young added there is a lesson for all Canadian law schools in the six-year journey Trinity Western University has taken towards obtaining a law school, which is currently on hold.

“This is a reminder to all law schools to consciously construct a learning environment and a social environment within their school that is respectful of and that values diversity, and all forms of diversity: religious, in sexual orientation, gender. That’s a continuing mission for all of us.”

Vanessa Singleton, a second year law student at Thompson Rivers University and incoming president of OutLaws, a LGBTQ2S+ law student advocacy group, says Trinity Western’s decision regarding the covenant is a step in the right direction — but it doesn’t go far enough if faculty and staff still have to sign.

“TWU is trying to save face a little bit here and do something that looks like a good thing, but they’re still kind of doing the same thing behind the scenes,” she said.

“I think that’s a normal thing to happen when it’s a really big institution, they get all this negative media around what they’re doing. And then their reaction is to do something really quick to try and cover it up, because they put all this money into building a law school and they don’t want to lose a bunch of money on this either, probably.”

Singleton’s predecessor, Thompson Rivers law student Grace McDonell, represented the OutLaws, including branches at the Universities of British Columbia and Victoria, at the Supreme Court of Canada last fall after they were granted intervenor status in the case on the proposed law school.

“It’s a really big accomplishment for [OutLaws], and Grace has done so much work on this to get the school to this point to actually realize that maybe the covenant is materially affecting especially LGBTQ+ students,” Singleton said.

But now it’s time for the private Trinity Western to do more work and open the conversation to the wider public, including the OutLaws, she added: “I don’t think it should just be the Board of [Governors] making these calls and trying to make business decisions that please the public, when in fact what’s actually happening operationally, behind closed doors, is the exact same thing that was happening before.”

Curt Allison, minister of outreach at St. Andrew’s-Wesley United Church in Vancouver, acknowledges the change likely came from the pressure Trinity Western faced in getting a law school. But that’s how social change is made, he said. 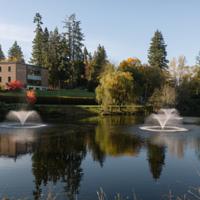 “The dominant voice or ones that rule are not just going to change because they care about those they are oppressing. There always has to be a sort of external pressure,” he said.

A gay Christian who once attended Bob Jones University, an American evangelical school he says is more conservative than Trinity Western University, Allison says the covenant decision is one step — albeit a baby step — towards a more inclusive church overall.

“Would I wish it was for everybody, the faculty? Absolutely. But I’m happy with this change, and I bet you going down the road if it continues like this, hopefully, there will be changes for the faculty as well.”