Stigma was always attached to Chinatown, being an inner-city area with working-class immigrants. But the area lost its role as Vancouver’s sole Chinese hub as ethnic Chinese locals moved elsewhere in the region. New Chinese immigrants formed communities in suburbia instead, a trend that started in Vancouver in the 1980s. Also Chinatown traffic slowed because it was next door to the Downtown Eastside — a community that has struggled with poverty, drug use and poor housing conditions. One upset reviewer on Trip Advisor said Chinatown had “more needles than noodles.” There were many empty storefronts back in 2011.

The 2011 Historic Area Height Review was viewed as the solution by city council, some community groups and property and business owners. Allowing bigger buildings and greater density would mean more businesses and more buzz, they thought.

But when the density tap was turned on in 2011, Chinatown’s sensitive people and places were hit the hardest.

Despite the many challenges, Chinatown remained an important community for low-income seniors, many in subsidized housing. Chinatown was walkable, they could get by in their mother tongues and it was rich with amenities like green grocers and gathering places like benevolent society clubhouses. Also many Chinatown faithful, despite not living in the area, would visit for shopping and programs like arts and sports.

Between 2012 and 2016, Chinatown land values doubled, according to city staff. Some longtime landlords who owned properties housing seniors decided to cash in and sell their land.

New condo developments were built and new businesses moved in. The median household income of one affected census tract — one of B.C.’s poorest — jumped from $14,000 in 2005 to about $27,300 in 2015. Entrepreneurs opened slick bars, boutiques, hip restaurants and a dozen places for espresso to cater to residents and visitors with money to spend.

Many of Chinatown’s longtime mom-and-pop businesses were hit with heavy property taxes. Between 2009 and 2016, half of the area’s small food businesses — green grocers, fishmongers, herbal shops and meat shops — closed, according to a count by the non-profit Hua Foundation.

This month, after seven years, Vancouver city council voted to downzone Chinatown to the way it was before the 2011 height and density plan.

It was a long-awaited win for advocates who wanted to see residential, economic and cultural development happen more thoughtfully. The City of Vancouver has begun assembling a team to plan for the area’s tangible and intangible cultural heritage, a definition used by UNESCO.

Many people from the business and development communities were upset by the downzoning; a group named Chinatown Voices said the 2011 policies made the area “significantly healthier” and called the downzone “draconian and drastic.”

We decided to throw some market-based arguments at Melody Ma, a neighbourhood advocate who leads the #SaveChinatownYVR website to educate and engage the public with city hall. She attended and live-tweeted multiple council meetings and public hearings, the longest of which was 26 hours over four days for the controversial 105 Keefer development that many viewed as the last straw for inappropriate projects in Chinatown.

Argument: The 2011 Historic Area Height Review policies that allowed taller, wider buildings has resulted in some success in Chinatown. Developers built new mixed-use projects in the area with homes and shops, replacing derelict properties and welcoming new residents and businesses. This is much healthier than Chinatown’s tired state before then.

Melody Ma: The main questions are: Success for whom? Healthier for whom?

The height review policies resulted in buildings that are out of context architecturally, culturally and economically. Instead of fulfilling the images developers sold — affordable, culturally appropriate green grocers with carts of vegetables spilling into the street — Chinatown received businesses such as a high-end white marble “Italian-inspired” grocer and a dental office that calls itself “Crosstown.”

The height review policies combined with the real estate frenzy in Vancouver turbo-charged real estate speculation in Chinatown. The City of Vancouver reported the average real estate prices for Chinatown increasing at a rate that is five per cent higher than Vancouver’s average. In addition, speculators were selling and flipping properties in Chinatown several times over. Chinatown constantly topped local and national lists of endangered heritage sites due to the “development wave” crushing the culturally significant historic neighbourhood.

The city and people who care about Chinatown quickly realized that the intention of the 2011 policies were not met and resulted in harm: the economic displacement of many longtime businesses, cultural appropriation through using “Chinese” symbols reduced to exotic costume without cultural context for money-making purposes and cultural erasure as the built and intangible heritage of Chinatown disappears. This paved the way for the city to rethink the zoning policies for Chinatown.

Chinatown is faced with additional complexities and nuances, such as the necessity for heritage and cultural preservation, and affordable housing needs for a low-income and aging population. Blind blanket acceptance to any and all forms of development can be harmful as demonstrated by the development activity since the 2011 policies.

Seniors’ cultural space and social housing are necessary for Chinatown, but they must be accompanied by livable environments that are culturally and economically accessible. When cultural space and a few token units of social housing come with the irreversible damage of gentrifying a low-income community and cultural erasure, we need to rethink how those necessities and amenities should be achieved. Imagine living in a neighbourhood where you’re not able to afford anything or access any services due to language and cultural barriers.

Vancouver is a multicultural city. You can get Chinese stuff everywhere; Chinese people live everywhere. Today’s Chinatown needs to appeal to a wider demographic to survive. We need a vision of Chinatown that isn’t based on nostalgia for what the enclave and community was in the past.

Chinese stuff could be everywhere, but there is only one original Chinatown in Vancouver that can never be recreated.

Chinatown is part of the collective history of Vancouverites and Canadians and remains a local-serving and low-income-serving neighbourhood. It was and still is a place where Chinese Canadians can authentically discover and live their cultural identity. It was and still is an intergenerational place that serves and cares for some of the most vulnerable people in our city.

Being a “multicultural city” doesn’t simply mean that you can eat pizza, ramen, sushi and dim sum at a whim; being a “multicultural city” means everyone across the economic spectrum has equitable access to live and practice their culture. People should have the dignity to age in place, have communion in spaces and with food that they are grew up eating, have access to services and social spaces that are culturally-appropriate, and more. The fight for cultural sustainability and equitable economic access is not nostalgia, but an act of survival.

Downzoning Chinatown will only cause scarcity, which will increase unaffordability for businesses and people who live there. 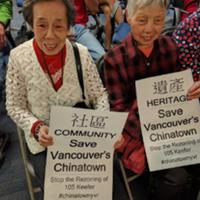 Chinatown is only about a dozen blocks. It is not and should not be the answer to all of Vancouver’s housing issues.

The 2011 policies for Chinatown did not contain any density caps, floor caps or even development site widths typically seen in other Vancouver neighbourhoods. The lack of zoning protections combined with Vancouver’s real estate market drove land speculation and heightened development pressures in Chinatown. Significant increases in property taxes made it difficult for traditional and local-serving businesses to survive.

In response to all these issues, the city introduced the new zoning policies last week to calm the real estate pressures.

The irony is not lost that Chinatown is one of the last remaining affordable low-income serving neighbourhoods in Vancouver, yet it is becoming increasingly unaffordable due to unhindered development that was supposed to “increase affordability.”

Chinatown needs people who will frequent its existing businesses now.

As we have seen since 2011, residential intensification has failed to produce authentic revitalization, only gentrification. We need to explore new strategies that will authentically renew Chinatown economically, such as encouraging more use of public plazas, UNESCO World Heritage designation that would put Chinatown on the world map for tourists and locals, and a strong and active BIA [Business Improvement Association] that actively promotes Chinatown and helps retain and recruit business tenants and more.

The future of Chinatown should not rely on future residents who may or may not reside in luxury condos in its vicinity. Besides, future Northeast False Creek developments and the new St. Paul’s Hospital planned adjacent to Chinatown will inevitably bring “extra body heat” to the general area.