“What’s worse, the prime minister is now nationalizing a pipeline — and will be unable to ensure Canadian taxpayers are protected with this deal,” said Scheer, who added that it was a “very, very sad day for Canada’s energy sector.”

“Giving $4.5 billion to a Texas oil company is a failure of leadership that shows that Prime Minister Trudeau has no vision for the future,” Singh told reporters in the House of Commons foyer.

He noted that the federal investment would create “what Kinder Morgan said would mean fewer than 3,000 jobs,” representing “almost $1.8 million per job — jobs that are short-term and won’t be there for the next generation.”

“Kinder Morgan, formerly Enron [Liquids Pipeline Company], bought Trans Mountain in 2007 for $550 million,” she said. “The people of Canada have just committed to buying those same assets for $4.5 billion. Kinder Morgan just saw an extraordinary return on investment for an aging pipeline.”

May pointed out that Kinder Morgan indicated the pipeline expansion would cost $7.4 billion.

“The $4.5 billion announced by Finance Minister Morneau and Natural Resources Minister [Jim] Carr is to buy the existing infrastructure, the existing assets,” she said. “Building the expansion is [a] blank cheque, but this time the government of Canada will be writing the cheque to itself because there is no private sector investor.”

She added: “They’ve announced that they will try to find a private sector investor. I submit that if there were private sector investors, Kinder Morgan would have found them. Kinder Morgan has been looking for investors and long-term contracts ever since [it] announced this project in 2013 and have come up empty — [but] did get the most gold-plated bailout in [Canadian] history with a $4.5-billion buyout from the federal government.”

At his news conference with Carr earlier in the day, Morneau said that the project would “proceed under the ownership of a Crown corporation” through a commercial agreement “that we believe will deliver a real return on investment for the benefit of British Columbians, Albertans and all Canadians.” But the federal government will not, he said, “be a long-term owner of the project” and noted that “many investors have already expressed interest in the project, including Indigenous groups, Canadian pension funds and others.”

To facilitate the transfer of ownership, expected to occur in August, the federal government will extend the indemnity Morneau recently announced to “protect any new owner from costs associated with politically motivated delays,” he said. Alberta will also support the project, providing an emergency fund for any unforeseen costs, if needed, and in return, the province will receive “value commensurate” with its contribution, according to the finance minister.

“To investors who are considering Canada as a place to build big, important, transformational projects like the Trans Mountain expansion, we want you to know that you have a partner in Ottawa, one who not only respects the rule of law but who understands the challenges that you’re up against and who’ll work with you to find solutions that work for everyone,” he said.

Morneau said the project would have no “fiscal impact,” and when asked to explain the dollar difference in Ottawa’s investment and Kinder Morgan’s price-tag on the project, explained that the federal government would take a “user-pay approach, meaning that the oil companies will pay” to use the twin pipelines running from Alberta to B.C.

Later in a scrum with reporters, Carr was asked why the federal government would not provide details on the exact construction cost of the expansion.

“It’s a commercially sensitive item [that] is going to be put onto the market. It’s the wisdom from people who know about the way these transactions work that at a time when you’re into sensitive negotiations that’s not something that should be discussed,” he said.

“Canadian taxpayers will know every penny that’s ultimately committed to the project which we by the way see as an investment. This is an asset. There are revenues that will flow through the asset and there will be absolute transparency every step of the way.”

Scheer accused Trudeau of having “done nothing to assert federal jurisdiction” over the Trans Mountain project or to “fast-track references around constitutional questions” regarding jurisdiction.

Scheer said that if the Tories held power in Ottawa, they would “create the confidence in the investment sector by repealing C-69 [a bill before the House that would add such criterion as the social impact of energy investment in the regulatory-review process for projects, such as pipelines], [and] by lifting the ban on Canadian energy exports.”

The Conservatives would have also followed the “rule of law,” which the Trudeau Liberals have not done by having “emboldened protesters” and granting them “social licence” to oppose the project, Scheer said.

With the Trans Mountain investment, Trudeau “is trying to buy his way out of a problem,” said Scheer, who added that Trudeau won’t tell Canadians the total cost of the project and that the federal investment “is going to shareholders outside of this country.”

“He has chased away investment on two other major pipelines — Northern Gateway and Energy East — and now he’s asking taxpayers to pay for the third. That is a terrible indictment of Justin Trudeau’s energy policy.”

Scheer continued his attack against Trudeau in the House during question period.

“Before the 2015 election, pipelines in this country were built without taxpayers’ money,” he said. “They were applied for, they were approved, and they were completed without a cent of taxpayers’ dollars. The only thing that has changed between then and now is that we have a Liberal government. Why is it that every time elements of our energy sector get nationalized is when there is a Trudeau in the Prime Minister's Office?”

Trudeau wasn’t in the Commons, so Morneau replied. “In the decade before 2015, not one pipeline was built to tidewater,” he said.

But the Trans Mountain expansion shouldn’t proceed either, May said earlier in the day.

The project “still does not have permission to build from the National Energy Board, has not fulfilled its 157 conditions, and there remain 15 different court cases, with a decision expected from the Federal Court of Appeal any day,” May said.

“If the Federal Court of Appeal rules that Indigenous rights weren’t respected, [their] constitutional rights completely trump the federal government’s claim that ... it is now federal jurisdiction. It was [that] before we owned it,” said May who on Monday pleaded guilty to a criminal contempt charge arising from her participation in a March civil disobedience action against Kinder Morgan’s project, which she said on Tuesday, “was never in Canada’s national interests.”

She described Kinder Morgan’s month-end deadline to receive federal assurances to proceed with the Trans Mountain expansion as “a brilliant ploy” that involved taking its own project “hostage in a broad-daylight kidnapping and announced that the hostage would be shot on May 31 unless there was a guarantee [it] could proceed.”

May called Ottawa’s Trans Mountain acquisition “absolutely stunning” and that it “will go down as one of the worst deals in Canadian history,” according to a news release from her office.

“The only historic precedent that I can remember that’s anything like this was in 1967 when the federal government took over running the coal mines of Cape Breton and created a federal Crown corporation, and the provincial government of Nova Scotia took over running a steel mill by a provincial Crown corporation,” May told reporters. “It was an epic disaster in terms of the environment, the economy and [on] the federal treasury — and this one will be no different.”

Singh called the federal investment “a bad deal that betrays promises to end fossil-fuel subsidies” and that will instead spend “billions on a pipeline that will mean millions of tonnes in additional greenhouse-gas emissions.” 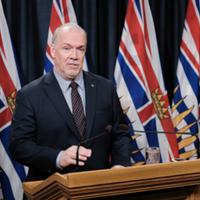 BC Will Continue Legal Strategy to Oppose Pipeline After Federal Purchase, Premier Says

On Tuesday, Trudeau spoke to Alberta Premier Rachel Notley, who applauded Ottawa’s announcement that she said would “unlock” investment in the province’s oilsands, and B.C. Premier John Horgan, whose concerns over the consequences of a potential diluted bitumen spill remain unabated.

During Trudeau’s call with Notley, he “acknowledged Alberta’s commitment to get the project done, and confirmed his understanding that Alberta’s contribution would act as an emergency fund and would only come into play if required due to unforeseen circumstances,” according to a readout from the PMO, which noted “their shared belief that it is possible — and fundamental — to grow the economy and protect the environment at the same time,” and that they “also agreed to continue working together on fighting climate change and protecting our environment.”

On the Horgan call, Trudeau’s office said the prime minister “reiterated the federal government’s jurisdiction over interprovincial pipelines” and “noted that this project is made possible because of Canada’s world-leading oceans protection plan, extensive and ongoing consultations with Indigenous communities, strengthened environmental standards, and a rigorous approvals process.‎”